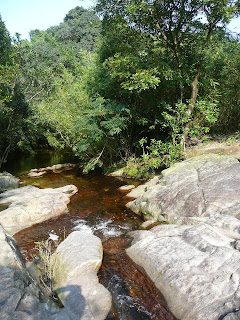 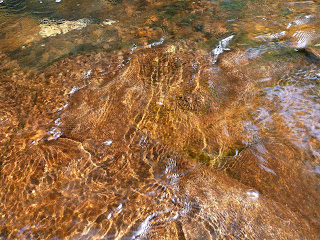 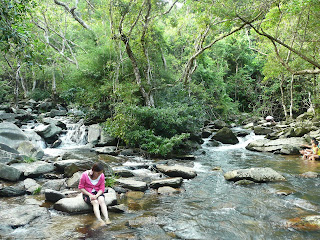 The area around Bride's Pool, while more visually stunning,
also was quite a bit more crowded and noisier

When I first started hiking in Hong Kong, I would conscientiously follow the directions for the trails I went on that I found in books like Alice Kershaw and Ginger Thrash's invaluable Above the City: Hiking Hong Kong Island and the Country and Marine Park Authority's helpful Hiking All in One.  But these days, as I told the friend I went hiking with this afternoon, I liked to mix and match sections of different trails -- and also feel free to change my route midway through a hike after spotting a sign pointing in a potentially interesting direction.
More often than not, I find there's a payoff to being willing to explore a different, alternative route -- and such was definitely the case today, when my friend and I veered off Section 10 of the Wilson Trail toward Bride's Pool along a section of trail I had never previously been on before.

Firstly, this section of trail appeared newly paved -- but instead of the much hated concrete, it was with really well laid out "crazy paving".  Secondly, we didn't see anyone else along the couple of kilometers or so that we were on this section of trail (and another couple or so kilometers after that) -- and so felt like we were walking on a really nice private path, and through some really gorgeous scenery to boot!

Thirdly, we came across a really pretty stream area -- one with lovely clear water, and on which rays of light fell and helped made all sorts of beautiful patterns in the water.  Even more amazingly, to one side, there was a rock face where ripples and light combined to create a wonderful shadow show that, if I had the time to spare, I'd be happy to watch for hours -- and which got this Hong Kong film geek immediately thinking of the early moments of one of the scenes in the water in The Bride with White Hair involving Brigitte Lin and Leslie Cheung!

Adding to the sublime scene was how peaceful it was -- and so much so that a couple of dragonflies felt free to settle for a time on a couple of rocks near the water.  All of which served as a major contrast to the scene that greeted us at the tail end of today's hike over at the main stream at Bride's Pool -- one that, frankly, was too full of people for my liking.

Granted that the stream and falls at Bride's Pool are more immediately eye-catching than that of the much less known -- and, as far as I know, unnamed -- stream area in Pat Sin Leng Country Park.  But especially if it stays as little visited as it appeared to be today, the latter's where I'd like to re-visit and spend more time around in the future.  And I truly hope that those other folks who happen on it will respect nature's beauty there and not do such as litter and otherwise pollute that gem of a place that really was such a treat to come across while out hiking in Hong Kong this afternoon. :)
Posted by YTSL at 10:37 PM

Am glad you like that second picture. Took sooo many photos today -- and yes, it was a very good hike indeed.

So... are my photos tempting you to come hiking again with me some time? ;b

Love the pools! They are welcome relief during a long hike in the summer heat. I would collect water from the pools and fill it in my empty PET bottle and use them to water my arms and head as I hike along the way to avoid heatstroke.

I've been known to sprinkle some water on my arms and face while out hiking -- but wow, I've never poured water on my head yet!

To avoid heatstroke, I make sure to wear a cap and drink a lot of liquids -- in the summers, I drink at minimum 1 liter on hikes and have sometimes gone up to 1.5 liters and even close to 2 liters on a single hike!

Thanks for sharing with your readers what looks to have been a pleasant (and a little enchanting) hike. Your top photo, a nice vertical shot of water over rocks, is most interesting. This might be too subjective for some, but anyone looking at this photo should focus on the upper right rock face where it juts into the water. There you will see the partial shape of a fish's head in left profile, with open mouth and complete with one eye. Well, anywhere near to The Ridge of the Eight Immortals, will be teeming with animistic life - all it takes is a little imagination to see it.

The bottom photo of the girl sitting on the rocks, again subjectively, could be a student-scholar contemplating nature. What a tranquilizing image.

I think Stress Ponyo would appreciate the calm of these photos, while Muse Ponyo would think the photos could provide a poet or artist with inspiration...This adds up to a most satisfying photo essay.

OMG, I didn't see the "fish head" in the first photo until you pointed it out -- but now I do! :O

Re the bottom photo: You're lucky I didn't capture the noise and general chaos around me -- otherwise, no way would you be able to imagine that young woman as a student-scholar contemplating nature!

And teehee re your imaginative comments re how Stress Ponyo and Muse Ponyo would react to those photos... :)