From the Luk Wu Plateau downwards towards Chek Keng (Photo-essay)

The first time I went along the Luk Wu Country Trail, my then regular hiking companion came across a sign post pointing out that one could get down to Chek Keng from the plateau.  Right there and then, I resolved to try out that route some time -- and I finally did so one sunny spring day with two other hiking buddies.

Looking back, I wonder whether I'd be so bent on going along this trail if I had realized that it involved such a steep descent along an unpaved trail where one ended up slipping and sliding down quite a bit.  But now that I've done it, I have no regrets -- and for more than one reason, I can safely say that this particular hike actually was one of those I found more memorable than most... :) 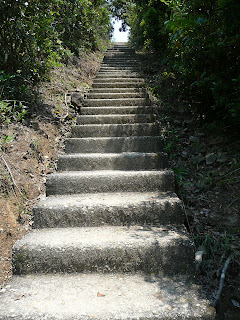 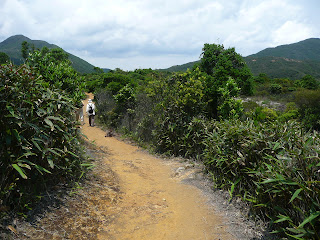 Happily, it also has sections of relatively level
as well as unpaved path 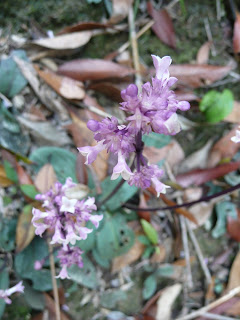 The kind of colorful wild flowers that are nice
visual additions to one's hiking experience :) 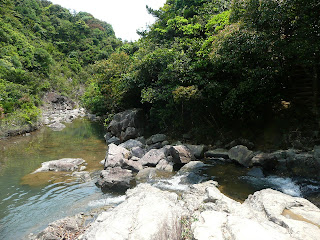 The trail cuts across a stream area that is really pleasant
when hordes of other hikers don't decide to break there
for a time -- as I've sometimes have found to be the case! 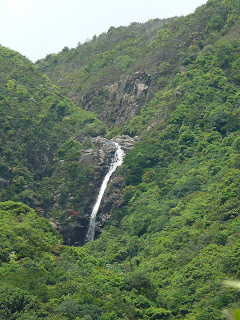 This is one of those waterfalls that appears to be seasonal
-- in that the first time I was up on the plateau, during a
drier time of the year, I didn't notice its existence! :O 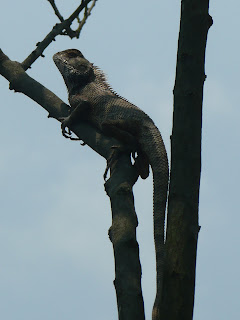 This lizard I definitely did not see the first time
I was up on Luk Wu Plateau! 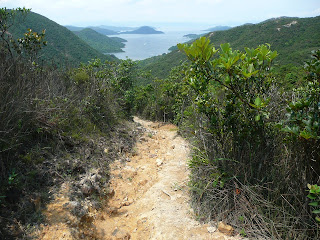 On the rugged, unpaved trail leading down to Chek Keng 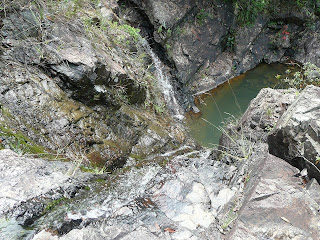 The kind of rock pool that'd be tempting to go for a dip in
-- if not for it being not that easy to get to!

To be continued in the form of one more photo-essay...
Posted by YTSL at 7:50 PM

This diversion from the Lu Wu Plateau is easily one of the best you've ever posted. Your photos capture the variety of the scenery. I've been on the beginning of the Luk Wu trail years ago, but as I started late, I had to turn back. That's why I enjoyed this entry because it showed me what I missed and must return to complete.

Of course, it is the photo of the lizard that lingers in my mind. The reptile looks so noble and commanding, that I'd like to call it The Sentinel of the Sai Kung Peninsula.

Thanks much for your comments and appreciation.

I believe I entered the Luk Wu Trail near to Pak Tam Road. The one thing I do remember more clearly about that day is the magnificent ferry ride from Tolo Harbour, stopping at Tap Mun, continuing on to Sai Kung.

BTW, last night on tv I saw a broadcast of the The Goddess with Ruan Lingyu. I can understand why she is a film legend because her face remains in my mind. I've yet to see Centre Stage, but I did read your old review of it.

Wow re your having gone on that ferry ride from Tolo Harbour to Sai Kung. Still have yet to have gone that one.

Re Ruan Lingyu: I have a DVD of "The Goddess" but am saving watching the movie until I get to see it on a big screen. Have seen her in "Little Toys" though and she is indeed really something.