Great views from The Peak and High West on a super hot but also super high visibility day :) 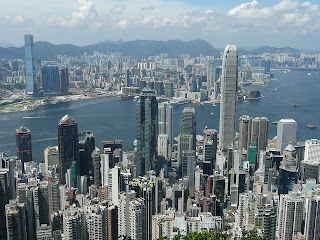 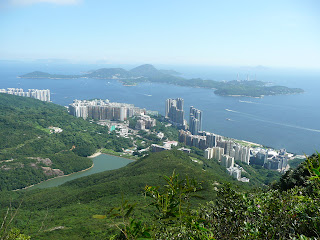 View from High West of the northwestern section of
Hong Kong Island, all of Lamma Island
and the beautiful blue water in the vicinity 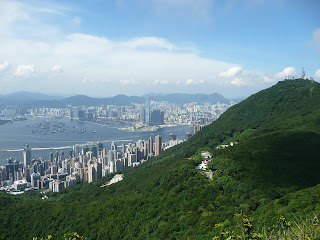 As the Dinah Washington song that I was introduced to by Wong Kar Wai's Chungking Express goes, "What a difference a day makes". Yesterday, I was feeling so sickly that I decided to spend most of it resting in my apartment.  Today, I felt better as well as felt a need to go out.  So, despite it being a super hot (i.e., around 33 degrees Celsius) day, I decided to take advantage of it being one of those super rare super clear visibility Hong Kong days by going up to The Peak for a stroll around its northern section (the one that looks out to -- and offers up great views of -- Victoria Harbour) with a friend.


While walking along The Peak's Lugard Road and seeing beautiful views that were considerably clearer than I had ever seen them before, I told my friend that it really would be a shame if we didn't truly take advantage of the great visibility we were being afforded and go up to the top of High West.


It took a bit of cajoling to get her to agree to climb the hundreds of steps up to the 494 meter high hill but I think I can safely surmise that once she saw the amazing panoramic views to be had when we were up there, she was in agreement that our exertion was well worth it!  For my part, even while I've been up to the top of High West several times before, I have to say that I get bowled over by the views from there every time.  And today really was the day that I've been able to see furthest from there -- so much so that not only could I clearly see Lantau (and make out Lantau and Sunset Peaks on it) but also Shek Kwu Chau and the Soko Islands.

More than incidentally, I find it puzzling that there are no signs pointing people to the trail that goes up to High West from the park at the western end of the popular Peak circuit.  Once you know about its existence though, it's easy enough to find.  Just go to the southwestern end of the park and then down a short flight of steps.  Follow the tree-lined path that it leads to for a few minutes.  It'll lead you to a clearing. Walk across it and you'll find the beginning of a long flight of steps that will lead you up to High West.  (And yes, it's recommended that you go back down the same way that you go up -- as the other trails on High West are on the seriously rugged side!)
Posted by YTSL at 11:22 PM

That is funny how we used practically the same shots!

...and after all the shots we took too. (I just checked: I took more than 50 photos today!!!) I guess those views were especially stunning... ;b

Absolutely stunning views! And I thought we had terrific views the day you took us walking there...!

It wasn't too bad the day we walked the Peak Circuit -- but as you now can see, the views really can be better! ;b

Truly stunning views! Wish I were there with my panorama camera :)

I hope that when you (next) visit Hong Kong, you'll be treated to beautiful visibility like this. A hint: we get more clear visibility and air days in the summer than in cooler months... which is why I continue to hike in the summer despite it often being super hot and humid!


Gorgeous views and I never tire of looking at photos of the juxtaposition of the vibrant green nature next to the high rises. Here in Vermont we just have vibrant green.

You've got me wondering now how high the tallest building in Vermont is... ;b

I swear I can see a yellow rubber duck in your first photo. :)

Good spot! Yup, I took that photo when the rubber ducky was visiting Hong Kong... ;b

Around what time in the afternoon did you shoot these stunning photos? I plan to visit this trail one day (I hope to get a good view just like yours, with no strong backlight). Thanks :)

Glad you like the shots. If memory serves me right, the first photo was taken around 2pm, the other two shots around 3pm.

Also worth noting (in case you're not a Hong Kong resident or are new to Hong Kong): clear air/high visibility days are far more likely in the summer than other seasons.