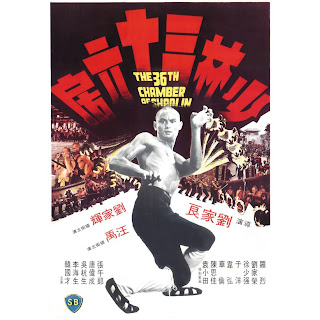 On May 1st of this year, I went to the Hong Kong Film Archive to take in an evening screening of Eastern Condors, a 1987 movie that could be described as Hong Kong's version of The Dirty Dozen. Starring Sammo Hung (who also directed) and his wife Joyce Godenzi, it's one of those entertaining Hong Kong movies with great action and an amazing cast -- that, in this case, included legendary filmmaker Lau Kar Leung (AKA Liu Chia Liang).

On that happy evening, I had zero inkling that less than two months later, Lau Kar Leung would pass away after losing a two decade battle against leukemia.  So I was truly shocked to find out this sad news of his having died earlier today.

Even as we mourn the man's passing, we still will have many wonderful films to remember Lau the filmmaker and film personality by.  We're talking, after all, of an individual who action directed 164 movies, directed 25 films, produced 1 movie, scripted 5 works and made appearances -- many of them pretty memorable -- in 186 different feature length films.

Among my favorites of the films that the fourth-generation direct disciple of Wong Fei Hung directed are Heroes of the East (AKA Shaolin Challenges Ninja), The 36th Chamber of Shaolin, Legendary Weapons of China and The Eight Diagram Pole Fighter -- all of which star his (adopted) brother, Gordon Liu. And although Drunken Master II is largely seen as a Jackie Chan movie, Lau Kar Leung officially has directing credit for it as well as makes a memorable appearance in that superb martial arts comedy that had Jackie Chan essaying Wong Fei Hung.

I know I'm really fortunate to have been able to have viewed a number of Lau Kar Leung's films on a big screen, in Hong Kong and also the USA.  Indeed, one of my favorite film viewing experiences ever involved viewing The 36th Chamber of Shaolin with a super enthusiastic full house crowd at the Philadelphia International Film Festival a few months before I returned to Asia.

Thank you for the memories, Mr. Lau.  And thank you also for helping make me as big a fan of Hong Kong cinema as I've become.  As the Brits would say, you've had a really good innings.  May you rest in peace.
Posted by YTSL at 11:25 PM

Hi YTSL -- Lau's passing is very sad... we should be seeing more tributes in the media in the next few days.

It is. More than BTW, I know you don't normally care for action films but I highly recommend "Heroes of the East" to you -- not least no one gets killed in that movie!

Sigh...maybe I will watch 36th Chamber tonight as a memorial.

I reckon that viewing "The 36th Chamber of Shaolin" would be a good way to remember Lau Kar Leung by.