A hike with rain and spider spottings! :) 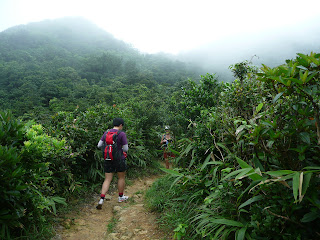 Walking towards the mist -- thank goodness we don't
have to worry about gorillas in Hong Kong! ;) 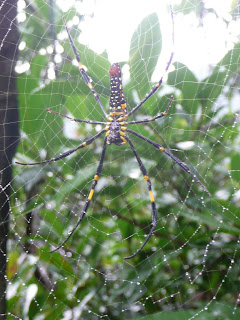 Arachnophobes should take heed though
as the big spiders are baack! :D 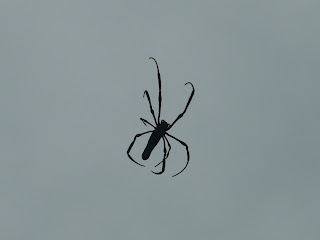 It may not look like it but this spider actually is
hanging from a web -- albeit one high above ground! :)

Dark clouds loomed as two friends and I prepared to begin our ascent of Violet Hill earlier today.  But we told one another that, at most, there would just be light showers rather than heavy rain according to the weather forecast, so decided to go ahead with our hike.
About twenty minutes into our ascent, we saw mist ahead but told ourselves it was only mist rather than rain, and walked towards it.  Soon we were in the clouds but after we began descending along the other side of the hill, we left the mist behind.  But just when I was thinking that 'Finally, we'll get some really good views...', the rain clouds finally caught up with us and decided to release some precipitation right in the area where we were!
Funnily, this downpour took place close to the same place where two other friends and I got really, really wet last summer!  Rather than try to take shelter under the tiny roof of a nearby information board this time around, my party carried on with our hike -- albeit after deciding to change our choice of trail from one that would have left us pretty exposed to the elements to another that had more tree cover.
This particular trail that skirts the eastern slopes of Violet Hill is actually a pretty easy one but for some reason, there are no signs pointing to it and it's marked as a dotted trail on the Hong Kong Island and Neighbouring Islands map produced b the Surey and Mapping Office of the Lands Department.  The result is that we saw few other people along it -- and a number of spiders with large, intricate webs that indicated that they've not been disturbed for quite some time!
Some of these spiders were on the small side but a few were female Golden Orb Weavers that can be pretty big indeed.  I know there are people who don't care of them -- and get repulsed even by photos of them! -- but I honestly look forward to seeing these beautiful as well as big spiders (and reckon that raindrops and dew on their webs make for a really photogenic sight).  I haven't seen them for months (I'm not sure about their life span or habits but they seem to hibernate in the colder months), so I really was happy to catch sight of them again on this hike -- and, yes, I have the rain to thank for doing so! :)
Posted by YTSL at 8:12 PM

Hi YTSL -- How coincidental you were rained on in the same spot! Sounds like a productive hike.

Not exactly the same spot but ya, close to it. I wonder whether that part of Hong Kong is particularly rainy...