Along Stage 5 of the Lantau Trail (Photo-essay)

Hong Kong's largest island is home to the 70 kilometer Lantau Trail that's divided into 12 stages of varying lengths, a few of which can't be done separately.  For example, Lantau Trail Stages 7 and 8 need to be done together as Kau Ling Chung, where Stage 7 officially ends and Stage 8 begins, is several kilometers away from the nearest road, never mind human settlement.  And the same is true of Lantau Trail Stages 5 and 6, which meet at Man Cheung Po.

Although Stages 5 and 6 of the Lantau Trail is shorter in length than Stages 7 and 8 which, when done in reverse, takes one from Shek Pik Reservoir around to Fan Lau and then eventually to Tai O, it's actually more demanding -- seeing as it goes up and down a few hills, including one that's 490 meters high and another whose peak is 465 meters above sea level.

But even when done on a less clear air day than my hiking friend and I would have liked, we still really enjoyed the 11 kilometer length excursion -- and, at the end of it, agreed that it's a hike we'd like to repeat at some point in time, albeit on a clearer air as well as cool day, because it's really quite enjoyable even if also on the challenging side! :) 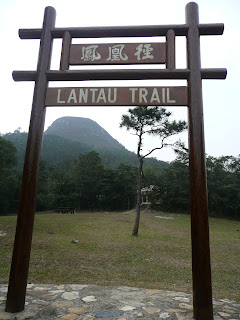 Right from the start of the hike, we were made
well aware that this would be a arduous one,
with many hills waiting to be scaled up! 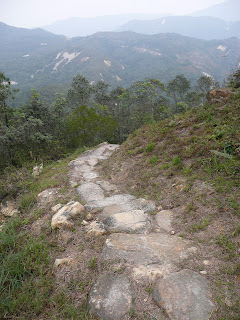 Fortunately the trail really is well constructed
and maintained -- and the views often scenic! :b 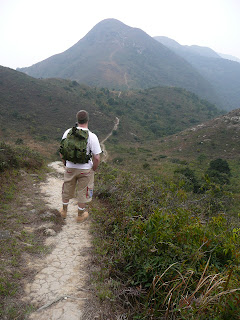 Yes, that's just one of a number hills
we'd be going up that afternoon! 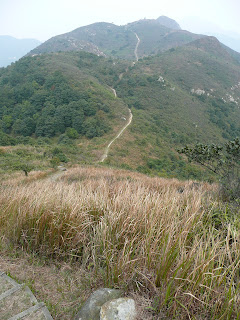 Even with less than optimal visibility, one can
see the trail stretching into the distance 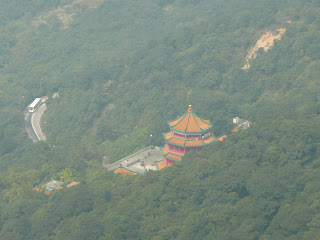 At times, it felt like we were far away from civilization
but at other points, we could see traffic on the road
and one of Lantau's many monasteries and temples 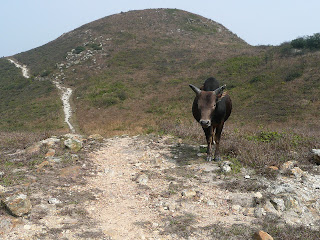 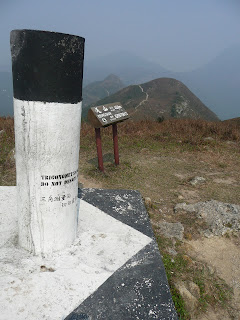 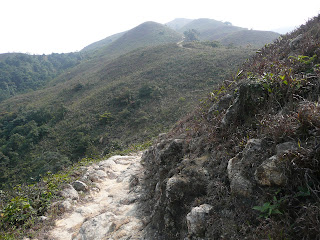 Still one peak over from the end point of Stage 5 --
so, yes, still some ways to go to hike's end