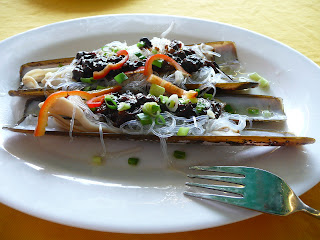 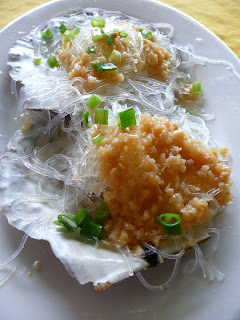 Scallops topped with garlic, more of that vermicelli
and chopped bits of spring onions 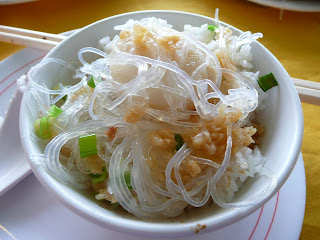 Delicious by itself but so much better when eaten with rice! :b

Yesterday, I mainly blogged about the hike I went on but couldn't help mentioning the post-hike meal I had at Rainbow Seafood Restaurant too.  Now here's sharing photos of some of what I had for dinner yesterday that should give a good idea of how delicious it was!

Another way in which one can get a good idea of how much I like the food at Rainbow Seafood Restaurant is that, like with the two other seaside restaurants that would be on my top three favorite seaside restaurants shortlist, I'd not only happily go there to eat post-hike but I also have been known to arrange a visit to their locales precisely because I want to eat at those dining establishments!
And when one realizes that Rainbow Seafood Restaurant is on Lamma Island, Hong Kee "Respaurant" is located on Cheung Chau, and Wah Kee (which TomEatsJenCooks's Tom erroneously calls Wai Kee but is absolutely correct in praising its food) in Mui Wo over on Lantau Island, one can truly appreciate: a) how far I am willing to go for a meal in a nice seaside restaurant; and b) how good I think these three restaurants are!!

Of the three, Hong Kee is the cheapest by quite a long chalk -- and each time I go there, I'm surprised at how both the food and cold bottles of Tsing Tao beer that my party will invariably order are.  With service that is extremely laid-back (especially by Hong Kong standards), this place -- whose friendly regular waitress now actually says the Cantonese equivalent of "Long time no see" whenever I visit now -- gets my vote as the venue for lazy, multi-hour meals on weekends, especially Saturdays (when the fares for the ferry between Cheung Chau and Central is quite a bit cheaper than on Sundays).  As for dishes: you really can't go wrong with its amazingly decadent seafood spring rolls (served with a small dish of mayonnaise!), squid with garlic, and the classic Cantonese steamed fish.

In contrast, the Rainbow Seafood Restaurant probably is the most expensive -- and usually the most packed and high tempo -- of my three favorite seaside restaurants.  It also definitely looks and feels the most touristy of the bunch too.  Still, I've never been dissatisfied with whatever food I've ordered at this Lamma Island establishment -- with their king sized razor clams often hitting the spot, as well as pretty much anything -- be it razor clams, scallops or geoduck -- that get served on the shell with garlic and vermicelli.
Then there's Wah Kee, whose location in the Mui Wo Cooked Food Centre can make its prices seem on the steep side but will seem entirely reasonable once you taste its food.  Frankly, everything I've eaten here has been wonderful -- be the dishes individually ordered or from a set menu (I've tried one for two people -- that includes squid with an amazing shrimp paste dip -- and another for four people -- with a large plate of beautifully spiced mantis prawns, and reckon that both are bargains in terms of quality as well as quantity).
Heck, even the complimentary soup is something that my hiking friend and I have come to truly look forward to having post-hike!  And while my mother griped that the boiled prawns we had at Hong Kee weren't as fresh as she'd have liked, she had absolutely no complaints about the equivalent dish we had at Wah Kee -- and even praised it for being really tasty!! :b
Posted by YTSL at 10:31 PM

Mmmmmm! Those pics are making me hungry! Love the razor clams...

If I can't get you to any of these seaside restaurants, maybe we should go to Tung Po again some time in the near future... ;b

Sorry you can't eat the photos but maybe some day, you'll return to Hong Kong and eat dishes like that at a seaside restaurant. :)

You're making me hungry, too! Those places certainly sound like they are worth an excursion.

When you next come over to Hong Kong, we can go on a hike, then end up at one of my favorite Hong Kong seaside restaurants, okay? ;b