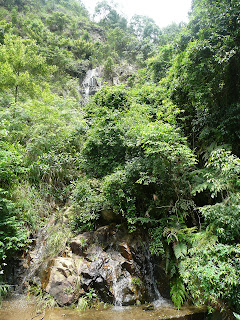 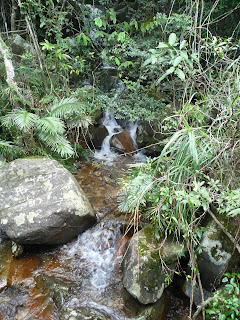 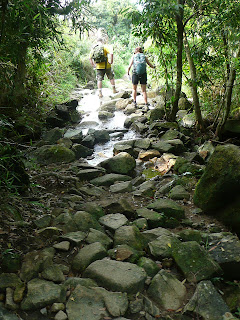 Parts of Wilson Trail Stage 7 itself looked like
it was turning into a stream, if not quite waterfall!

This has been an unusual week for Hong Kong weather wise.  For while it's accepted that May is generally a month that's generally rainy as well as humid and hot, it's still not all that usual to have the kind of rain that we had on Wednesday, where the Black Rainstorm Warning Signal was issued for the first time since July 2010. Put another way: it rained so much this past Wednesday morning that schools were closed for the day and the opening of the Hong Kong Stock Market was delayed!

Adding to the extreme weather was there being over 18,000 lightning strikes reported in the territory on Wednesday morning alone.  On a personal note, I was woken up by how much light there was outside my bedroom windows at around 4am -- light that was caused by what seemed like an almost continuous lighting up of the sky by lightning strike upon lightning strike.

In contrast, it hardly rained yesterday.  Instead, what was unusual weather wise was how beautiful the day was -- with bright blue skies, puffy white clouds and visibility gauged by the Hong Kong Observatory as being as far as 45 kilometers in some parts of the Big Lychee!

Believe you me when I say that it was pretty frustrating to be at work indoors yesterday.  So I was really happy when I had a day off from work today -- and found that it still was a pretty clear day in terms of not much rain and good visibility predicted.  And this especially since, after seeing that showers and squally thunderstorms are predicted for this Sunday, I got two friends to agree to go hiking with me today rather than this Sunday!

Suffice at this point to say that we had a good afternoon of hiking today -- one that involved going up 647 meter high Grassy Hill, Hong Kong's 14th highest peak.  Among the sights on view today were grand vistas (especially from the top of Grassy Hill) but also lots of earthworms (dead and alive!), a small brown snake (that I initially mistook for a large earthworm, until I looked closer and saw its triangular head and then also the way it moved), a couple of skinks, a number of butterflies (most of which did not want to pose for pics), some caterpillars, a whole tree full of slimy looking butterfly cocoons, and a number of waterfalls and streams that aren't visible -- or simply don't exist! -- in drier weather!

In particular, people thinking of hiking Wilson Trail Stage 7 in the next few days should be aware that at least three parts of the trail have turned into streams, if aren't super waterlogged.  And while they are not super difficult to pass over, one still has to be careful that one doesn't slip and twist one's knee or ankle, if not fall and get wetter than one might like to be on a fun day out in Hong Kong!
Posted by YTSL at 9:41 PM

Glad you took advantage of the nice weather today! Everything was in super sharp focus!

I'm glad too -- especially after seeing the weather forecast for this Sunday: i.e., "Cloudy with showers and squally thunderstorms"!