So Lo Pun - largely ruined but still not entirely uninhabited! 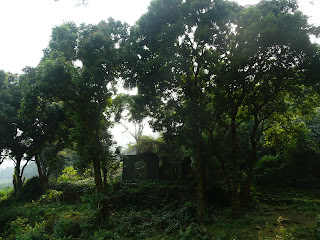 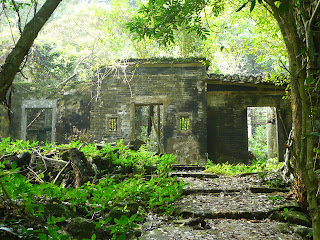 And indeed, many of its buildings are not much
more than mere shells now 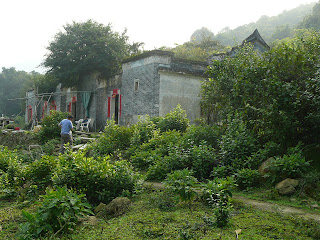 But at least one building looks to still be inhabited --
and we met three residents of the village this afternoon
(at least one of whose English was pretty good)! :)
Earlier today, my hiking friend and I paid a visit to a Northeastern New Territories village whose origins date back to the 9th century according to its Wikipedia entry.  Mind you, the same Wikipedia entry also states that "Today, the village is now derelict and is uninhabited." But among the things we discovered over the course of this afternoon's excursion was this village is not completely abandoned -- or, at the very least, has been recently re-settled by at least three people.
Definitely inhabited and prosperous in 1898, the year that the British leased the New Territories for 99 years from China, this village whose geography may be ideal according to fung shui principles  -- what with it being nestled in a valley but also with access to the sea -- was then known as So Nou Pun, with "pun" referring to its location in a wide valley (or basin -- which is what means in Cantonese).  However, no doubt because its location is less than ideal in terms of it being far away from any roadways, never mind any main roads, the village went into decline in the 1960s, and only a handful of residents remained by the 1980s.

Somewhere down the line, this remote settlement got to have a reputation as a "ghost village" where compasses would malfunction when in the vicinity.  Stories about the village renamed as So Lo Pun -- which translates from Cantonese to mean "the compass is locked" -- include a man having died of a heart attack after seeing ghosts there.  And a local hiker who joined our party midway through our excursion did appear much happier to be visiting the area with other people rather than on his own (even while having been happy to hike by himself on other parts of the trail!).
While it's true enough that So Lo Pun's buildings generally look to be in worse condition than the nearby abandoned village of Yung Shue Au and sparsely inhabited Kuk Po on the other side of the ridge, I didn't find the admittedly quiet settlement to be all that creepy.  Indeed, I found myself wishing that we could have spent more time there than we could spare, given its distance from our hike starting and end point of Luk Keng (reachable by green mini bus 56K from the Fanling MTR station).
Hopefully, I'll pay So Lo Pun another visit one of these days.  And if there are no signs of life in the village, only then will I be inclined to pay attention to all those urban legends about it being a haunted part of Hong Kong... ;b
Posted by YTSL at 10:26 PM

So what did the villager say? Wish you included that in the blog entry!

Didn't have a long chat with the villagers! Didn't want to disturb them as a couple of them clearly were busy at work and the third was an old guy enjoying his rest in the sun!!

Instead, as we passed by, one of them asked us where we were heading and when we told him, he gave us directions that proved pretty helpful. (Part of the way out was on the kind of trail that's hard to spot -- and, in fact, we lost the trail near Kuk Po and scrambled down abandoned agricultural terraces to get down the hill to that village!)

The hike itself as well as the village definitely was memorable. :)

I enjoy your photos of these small outlying villages very much. In this group I especially like the middle photo. I do so like to look at architecture that is different from where I live and abandoned buildings are another favorite of mine.

I recall reading this blog once before and it's nice to return to it. The top photo is one that will stay in my mind. For me, the soft lighting gives this photo the look of an almost pre-Impressionist painting of late Constable.

Thanks for seeing art(istry) in the top photo. Part of me would like to return to So Lo Pun at one point but another part of me remembers the hike as being pretty ardous, so...! ;b

I visited So Lo Pun in the spring of 1960. It was then fully inhabited, and consisted of a line of houses with traditonal coloured tile eaves. I visited with District Officer Tai Po who introduced me to the village elder in cantonese. You can imagine my surprise when the elder shook my hand and welcomed me in fluent English with a broad Liverpool accent. He had made his money in restaurants in Liverpool and returned to the village of his birth when he retired.I have read elsewhere that the village was without water. In 1960 there was a newly built mini-dam in a stream above the village, from which was piped to the village. The plan was that the dam would supply water eventually to Ap Chau island as well.I together with my group spent 4 or 5 weeks working in the area and visited the village on a number of occasions.

Sorry for taking so long to reply to your comments. Surprisingly, didn't receive an alert from Blogger re your having made them!

Thanks so much for sharing your recollections of So Lo Pun. Very interesting -- and makes sense about the English-speaking elder. So many people from that area went to work in restaurants in England!