Closing the 2013 HKIFF with Closed Curtain 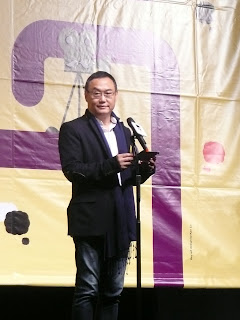 The directors of the HKIFF's Closing Film weren't
present on the night of its screening but
other filmmakers, including Red Dust's Yim Ho, were

More than a week has passed since the 37th Hong Kong International Film Festival came to an end -- so it's high time I wrapped up my HKIFF reviewing and reportage.  Officially, I only viewed one more HKIFF offering after the two films I viewed on April 1st since I caught Adam Wong's surprisingly excellent The Way We Dance not at the fest but, instead, the Hong Kong International Film Festival Society's new Cine Fan repertory program.

So, in total, I ended up viewing 15 films at the HKIFF -- and five other works (Ip Man - The Final Fight, Saving General Yang, The Berlin File, Starlet and The Way We Dance) that screened as part of the Hong Kong International Film Festival in other circumstances.  In general, I thought it was a pretty good fest personally for me -- with, interestingly, my favorites of the films I viewed all having been made decades ago...

The official Closing Film of this year's Hong Kong International Film Festival begins by telling the story of an Iranian man who went into hiding with his dog after the keeping of pet dogs was made illegal in his country.  Since I know so little about Iran besides it being very fundamentalist Muslim, I could actually imagine this tale being based on reality -- and, at the very least, know that an Iranian lawmaker has indeed proposed the outlawing of pet dogs in his country.

So early on in my viewing of this offering from Jafar Panahi (whose This is Not a Film I caught at the HKIFF last year) and Kamboziya Partovi, I treated Closed Curtain as a drama that, even while fictional, had some roots in reality. But as the film goes on, certain events occur that had me wondering how much of the work is actually meant to be fantasy and allegory.  And by the film's end, I found myself feeling that this ultimately is a puzzling work that raises more questions than it gives answers.

At the same time though, there's no denying its illegality as far as the Iranian government is concerned.  And with Jafar Panahi still officially under house arrest, the big question with regards to the work isn't necessarily what it's all supposed to mean but, in fact, how he even managed to make it -- and appear in it to boot! -- at all...


Giving the circumstances surrounding its production, it's hard to look at Closed Curtain as just a film as opposed to an act of personal and political defiance by a filmmaker for whom it seems that it'd be going against his nature to desist from making films.  On a related note: this clearly is a film made by someone who has not lost his abilities to imagine and create -- but there's also a sense of hopelessness and depression emanating from its main maker that can make it pretty hard to watch.

My rating for this film: 6 (in terms of watchability and comprehensibility, sadly)
Posted by YTSL at 11:32 PM