The Way We Dance (movie review) 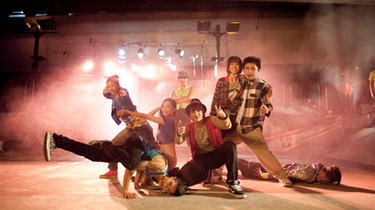 Give The Way We Dance a chance!

In recent years though, thanks to having watched some b boys and other hip hop dancers performing live on stage in Hong Kong (including as part of the Tang Shu Wing Theatre Studio's incredible physical comedy production, Detention), I've become a fan of this type of performing art.  So when another Hong Kong movie about hip hop dancers appeared on the scene this year, I was more inclined to give it a chance and check it out.


Post having viewed The Way We Dance, here's stating that I am so very glad I did so -- because that which had its world premiere at the Hong Kong International Film Festival, was the opening film of the HKIFF's Cine Fan programme and is due to get a general commercial release in Hong Kong this August may well be my favorite Hong Kong movie of 2013!

Funnily enough, The Way We Dance also may get my vote as one of the most unlikely Hong Kong movie I've seen in 2013, or even the past few years.  For in addition to being a rare Hong Kong film about hip hop dancers, it also has a cast of hardly big names (whose names, bar for rocker Paul Wong's, are more novel -- Babyjon?  Lokman?? -- than familiar) and a director, in Adam Wong, whose last film before this (Magic Boy) was released five years ago -- and was as low key as this latest one is exuberant.


If truth be told, this drama's story -- involving love triangles and dance rivalries -- can seem pretty generic.  But the dancing on display is impressive, the music helps gets one in a great mood, and quite a few members of the cast (particularly Cherry Ngan and the amusingly monikered Babyjon Choi) are very likeable.

What really makes The Way We Dance a winning effort for me though is the creativity that's on display.  Among other things, it's not just the very idea of combining tai chi with hip hop in a single movie but the way this is done in this film.  Then there are the surprise elements in a couple of the dance scenes in the latter part of the movie -- which, in one instance, can cause one to gasp out loud and, in the other, should get viewers smiling at how very inspired and cool it is. :)