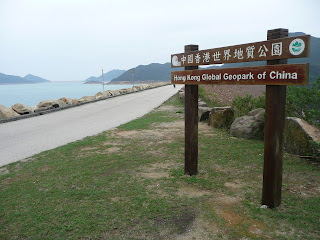 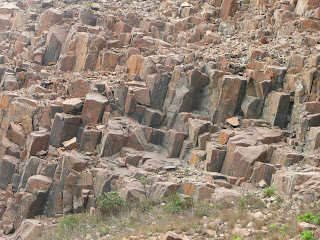 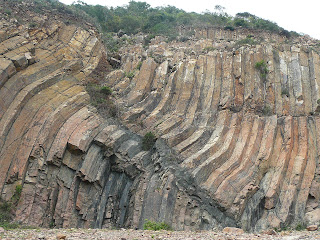 
Some time back, three friends and I went on a 15 kilometer hike that took us from Sai Wan Pavilion to Long Ke, then High Island Reservoir and past it to the official start of the Maclehose Trail at Pak Tam Chung. At the East Dam of High Island Reservoir, we saw signs for the High Island Geo Trail that's just a little over 1 kilometer in length.  But at that point in our hike, we were feeling pretty tired, so decided to forego going along that geo trail in favor of focusing on getting to our hike's end some 9 kilometers away still.


However, the geology geek in me resolved to return to check out the High Island Geo Trail at some point in the future -- and this afternoon, that's what a hiking buddy and I did... even though this involved our hiking 9 kilometers from Pak Tam Chung to the High Island Reservoir's East Dam and then back again along the same 9 kilometer long trail!


I'm not sure if my hiking buddy considers the sights that we saw today to be worth the energy expanded and aches accrued.  But I really was pretty happy with what I got to behold today.  After all, it truly isn't every day that one gets to cast one's eyes on spectacular geological sights consisting of volcanic rock in the form of columns, including ones that are hexagonal shaped and that have been bent into s-shapes -- and in Hong Kong to boot!

Oh, and the very sight of High Island Reservoir isn't too shabby either.  The largest reservoir in Hong Kong,  it is quite the engineering wonder -- having been carved out of the sea by damming two ends of a narrow channel between High Island (which then really was an island) and the mainland peninsula of Sai Kung.  And while today's hike really was to check out some cool geological sights, it truly was a boon to have been able to view cool engineering along with "plain" scenic sights for much of the way too! :)
Posted by YTSL at 10:21 PM

Interesting rock formations! Did you deduce what kind of rocks and minerals were there, geology geek? :P

It's volcanic rock! More precisely, if you follow one of the links I embedded into that blog entry, it's "a type of acidic rhyolite ¾ dacite porphyroclastic lava. It is rich in potash feldspar and quartz phenocrysts..." :b

You are a bona fide geology nerd!

"High Island Geo Trail" sounds so dry -- it needs a more exciting name like "The Giant's Causeway" or "The Devil's Postpile" : )

Geek, not nerd! And not majorly bona fide-- but it's true that I do get excited by certain geological sights and did take a few geology courses as an undergrad! ;b

Speaking of The Giant's Causeway: That's what I thought of when I caught sight of those hexagonal shaped columns! :b