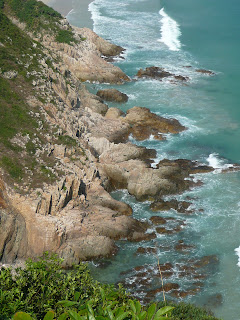 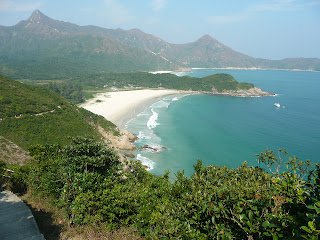 More specifically, those cliffs are part of Sai Kung's
Tai Long Wan -- and also feature (to the
south of the beach area) in the above photo :) 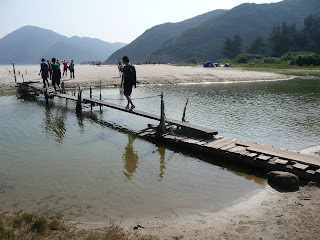 On the other side of this rickety bridge
are two cafes whose location is hard to beat ;)

One super hot summer's day two years ago, a friend and I made our way out to Sai Kung's Tai Long Wan and spent some time hanging out at Sai Wan and Ham Tin beaches. Last year, I returned to the area with a different friend -- and on a cooler day with far more pleasant hiking weather.

Earlier today, I completed my third hike to Tai Long Wan -- one which, like with last year's, had my hiking buddy and I heading out via a trek to Chek Keng followed by a cool boat ride to Wong Shek Pier and a bus ride back to Sai Kung town for dinner.  And once again, I found myself thinking that it is quite a trek but it really is a pleasant excursion!

One major reason is, as I trust that my photos (in this blog entry but also the photo-essays I've linked to) show, Tai Long Wan really is a beautiful place -- with sometimes downright breath-taking scenery of the kind that few people associate with "Asia's World City".

Something else that adds to this hike's pleasure quotient is that one can break up the trek at Sai Wan and Ham Tin -- and not just to go walk on the beach or swim in the water either.  More specifically, there are cafes along the way where one can sit down for a bit and eat something tasty or just pleasantly sustaining.

At Sai Wan, there were at least three different eateries open today -- two of which offer awesome beach views.  At one of them, my hiking buddy and I snacked on refreshingly cold tau fu fah (soybean pudding) for HK$5 a bowl (despite the English menu listing the price as HK$10 a bowl!).

At Ham Tin, there are two cafes on the northern side of the beach -- both of which were doing roaring business this afternoon.  The one we went to also had tau fu fah on its menu but at this place, we opted to share a plate of fried rice with chicken and pineapple mixed into it.  Costing us HK$50 (pricey by some standards -- but hey, you're paying for the cafe's location!), it was substantial without being so filling that we'd feel too "heavy" when slogging over the final hill of our hike to get out of Tai Long Wan over to Chek Keng.

A piece of advice if you are thinking of adding chili sauce to your dish of choice at Ham Tin: be warned that you are likely to feel that spice burning inside your stomach on your hike out of the area!  And yes, this is the voice of experience speaking -- as that's what happened to me last year!  So this time around, I made do with the fried rice "as is".  And really, when washed down with such as a glass of "pineapple ice" (for HK$22), the meal actually is pleasant enough to the taste without adding anything to it. :)
Posted by YTSL at 10:35 PM

What beauty! To eat with that view would be amazing!

The view from the cafe is nice but the views looking down from the trail really are the best. :)

Oh I would really like to see the HK that locals only know about, like this one. The HK that is beyond all the shopping for branded products. I hope I'd be lucky to have that opportunity someday.

I missed visiting you for PH, busy weekend.

Well, I hope that the next time you plan a visit to Hong Kong, you make use of my blog to help you figure out where you want to go... ;b

And thanks for visiting my blog and leaving comments even after the weekly Photo Hunt "period". :)

Gorgeous! Not at all the images your mind conjures when thinking of Hong Kong. I was there a long time ago, an did see some spectacular views.

I know... people think concrete jungle full of shopping malls, right? There definitely is a side of Hong Kong's that that -- but the natural part of it actually covers more land! :)