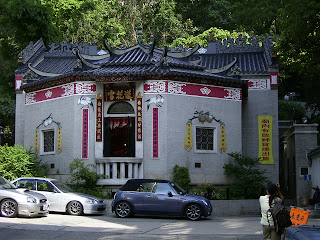 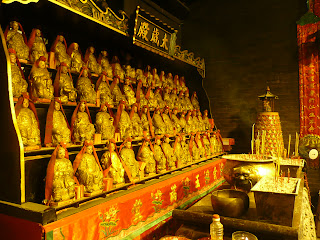 The temple's principal deity is Kuan Yin
-- the Goddess of Mercy 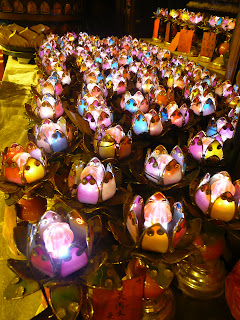 In the first year or so after I moved to Hong Kong, I made it a point to go check out a number of Taoist and Buddhist temples in the territory.  Fairly early on, I got to discovering that while photography was allowed in Hong Kong's Buddhist temples, this usually was not the case in the Taoist temples.

This state of affairs puzzled me -- particularly since the Taoist temples I had visited in Malaysia and Macau didn't have such anti-photography strictures.  And while Hong Kong friends I asked about this gave some suggested answers (such as that there was a fear that photographs might capture images of spirits inside of the temples), those seemed to involve more guess work and speculation than actual facts.

I think we got closer to the truth when a Singaporean friend suggested that the photography restrictions were the result of the Chinese Temples Committee -- which administers a large percentage of Hong Kong's Taoist temples -- wanting to retain image rights of the temple interiors and the objects that were housed inside the temples.

In any case, those administrative authorities look to have relaxed their "no photography" rules recently -- with the result being that when I re-visited Lin Fa Kung over the weekend, I finally was able to take photos inside the temple that I find visually interesting -- and not just because it's architecturally unique, with a building shaped differently from other Kwan Yin temples and a back section that lies on a large rock atop of which the goddess is said to have appeared.

To be sure, flash photography still is not allowed inside of the temple.  (And I understand that restriction as the flash of cameras can be blinding and also distracting to people going there to pray.) Still, as I trust that you will agree upon viewing two of the photos at the top of this blog entry, there is much that comes out well enough in shots taken without the use of a flash. So this kind of photographic compromise is one that's okay to and fine by me.  :)
Posted by YTSL at 11:40 PM

Very beautiful. I love the lotus shaped lamp offerings. so colourful and yet so calming.

Thanks! I'm glad you like the photos -- and yeah, I found the lotus shaped lamp offerings to be a real photographer's delight. :)

What an unusual building. Fun photos of inside the temple. I'm glad they allow photos as the inside of this temple looks very interesting. How is the inside light?

Yes, it is indeed an unusual building -- and BTW, it's associated with Tai Hang's annual fire dragon parade!

Re the light on the inside: it's a bit dark in the main area but the further into the temple, the more well lit it is. :)