One hot Sunday in July 2010, a friend and I decided to hike to Sai Kung Peninsula's Tai Long Wan from the Sai Wan Pavilion.  After getting there and enjoying the gorgeous sights and more than the place had to offer, we decided to head back along the route that we had come from to get the bus back into Sai Kung town rather than press ahead and go along the rest of Stage 2 of the Maclehose Trail.

For while we had been treated to breathtaking views on the hike, I got to belatedly realizing that this was an excursion better attempted when the temperature was lower because, frankly, I actually got worried at one point that I was in danger of getting heat stroke! So it wasn't until a considerably cooler winter's day that I ventured again along the same trail -- and with a different friend in tow!

On this more hike-friendly day, the general humidity as well as High Island Reservoir's water levels were noticeably lower than on the previous Sunday that I had hiked in that area.  But the sun was still shining, the sky still was a beautifully blue for much of the day and the hiking so much more pleasant that we did end up going beyond Ham Tin.  However the last few kilometers of Maclehose Trail Stage 2 would have to wait until still another time as this time around, my friend and I got tempted by the boat ride from Chek Keng that I've decided is my favorite of all ferry and kaito rides in Hong Kong! ;b 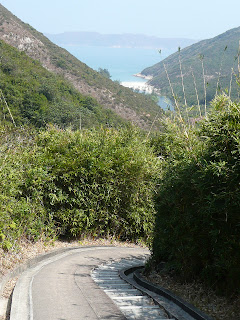 After first climbing up from Sai Wan Pavillion to Chui Tung Au,
the trail leads steeply down to Sai Wan -- which one can see
is still a distance away but so alluring looking already 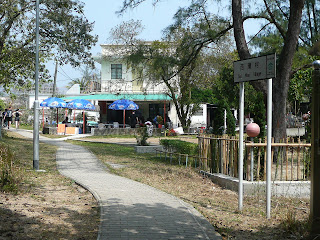 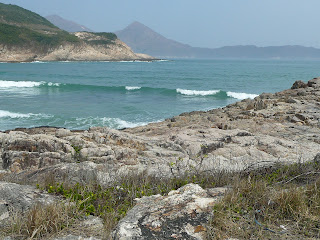 But what's really irresistible there are the gorgeous views
to be had there for free! 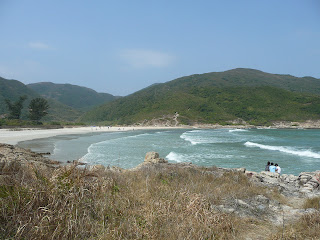 And no, it's not a mirage that such a place exists in
Hong Kong -- and that it's so uncrowded to boot! ;b 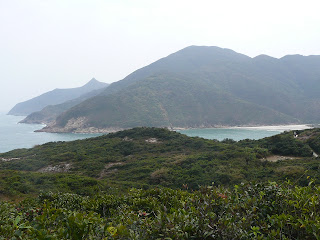 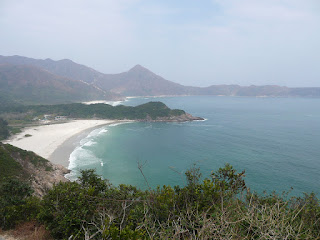 A view of Tai Long Wan that doesn't include Sharp Peak 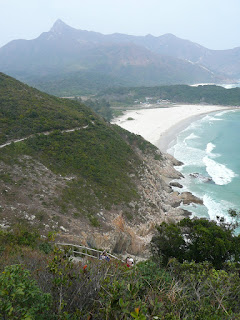 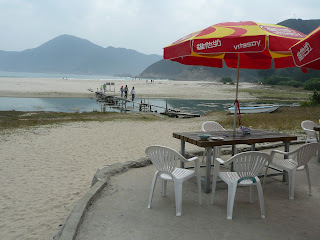