So what lay ahead after on the 15 kilometer Northeast Hong Kong hike (chronicled thus far in five previous photo essays here, here, here, here and here) that two friends and I went on whose main objective was to get to the picturesque walled village of Lai Chi Wo after we made it to our main destination?  The answer: quite a bit of a trek out still; one that involved going northwest-wards and up to the natural gap between still higher ground known as Fan Shui Au and then down hill to an area bordering Starling Inlet (AKA Sha Tau Kok Hoi) that, as we found out, is home to some more (near) abandoned villages!

In all honesty, although I knew about Lai Chi Wo (and its fung shui wood) long before I went on this particular hike, I was unfamiliar with these other (near) abandoned settlements that I similarly found to be very interesting to visit.  All told, because we reached Kuk Po and the associated space which borders the Frontier Closed Area of Hong Kong that borders Mainland China pretty late on into our journey, we weren't able to explore it much.

Instead, we tarried just a short while to do such as snap a few photos and mentally plan our next visit to this borderland area before heading along to the still inhabited village of Luk Keng (that's also home to a green minibus route terminus) that was the end point of this particular trek (but which I've already targeted as the starting point of the next excursion that will take me to Luk Keng)! :b 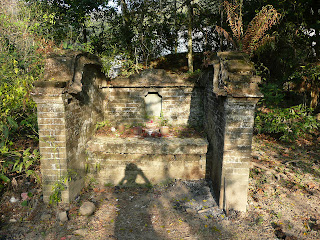 The earth god shrine at Kuk Po -- and my shadow approaching it! 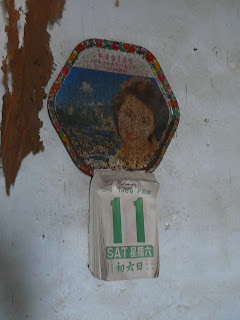 A calendar in an abandoned house points to its last day
of its occupation having been February 11th, 1989 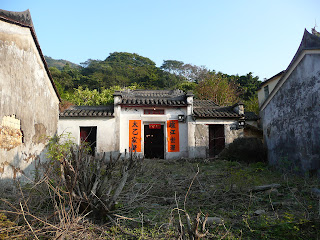 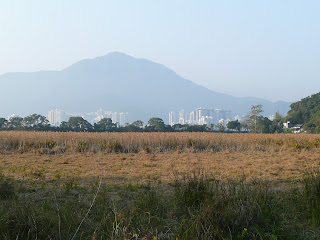 Strange as it may seem, the tall buildings in this photo
are actually in Mainland China while the unbuilt-up space
in the foreground is situated in Hong Kong 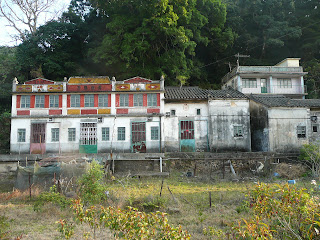 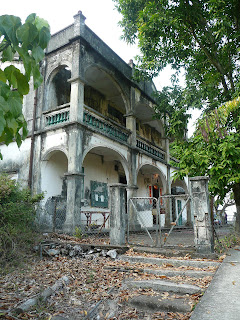 Perhaps the most impressive single building we saw on
this hike -- once home to a school built in 1928 and said to
have been inspired by Guangzhou's military academy! 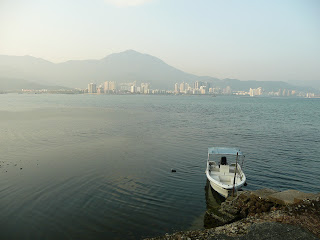 Somewhat surreally, these buildings and villages that look like
they are from another time actually exist in the present day --
and in an area where a modern looking Mainland China
is to be found just across the water and border 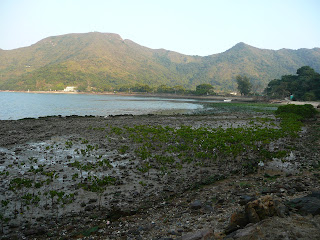 And coming up next week: another photo-essay... but this time, from a different hike! ;b

Thanks much for commenting on this entry! I'm glad you like this photo-essay. I don't think I've seen that many pictures of abandoned buildings in Vermont but I imagine that some of them would be interesting too. But ya, many of the ones -- some of them much more ruined -- that I've encountered while hiking in Hong Kong I do find pretty fascinating. :)

After seeing your photos in this post, I decided to go and check out these villages yesterday. I had already explored Luk Keng but not further. The coastal walk from Luk Keng to Kuk po is gorgeous. Thanks for the idea.

You're welcome -- and I'm glad you enjoyed your own excursion to Kuk Po. :)

I am looking to go soon. I love finding so many places in Hong Kong where there are NO PEOPLE. How delightful a thought!

There are actually quite a few hikers in the area on Sundays -- so much so that villagers have set up a few food and drinks stands. So it might be a better bet for you to go on weekdays... ;b