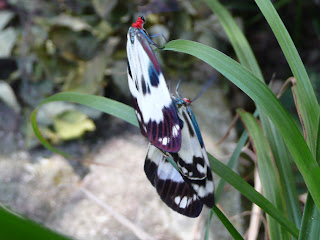 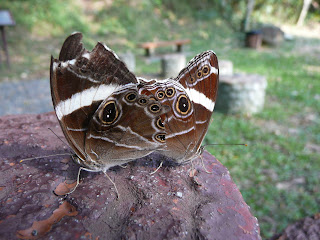 For those who're wondering why I didn't put up my Photo Hunt entry only now rather than earlier today: I goofed by preparing an entry for next week's theme and only realized that this week's theme was two rather than wet/rain after I had finished writing up what will appear on this blog next Saturday! In any event, for my regular Photo Hunt visitors, I hope that this entry will be one you'll consider worth waiting a few extra hours for.

At the very least, I hope you won't be offended by the two photos I've chosen for this entry -- which, incidentally, was written while listening to The Butterfly Lovers music ;) -- both of which show butterflies literally coupling! And for the record: this sight is one I have become pretty familiar with over the course of hiking in Hong Kong -- not having just seen this happen one or two but, in fact, multiple times!!

The first time I witnessed such an occurrence, I was out on a hike with my mother. And as I previously recounted, the two butterflies spotted in the act were so still that I wondered if they were dead and it was my dear mother who had to tell me it was not so -- and also tell me what the critters were actually doing!

In the years since, I've also been witness to other insects (including grasshoppers and stink bugs) doing "it"; with the most memorable sights coming courtesy of dragonflies who really do assume the most... interesting positions (see here and here)! However, I will always have a soft spot for the butterflies because, whatever they may be doing, it's hard to lose sight of it being so that they really are very colorful and beautiful creatures indeed!! :b

Marvellous photos! Funny, I published the Photo Hunt for next week at first, too. I only realised my mistake when I went to post the link to the Facebook page. :D

Well the birds and the bees do it, so why not the butterfly! :) They are both lovely pics by the way!

Glad you see their beauty. Hope you have a good weekend too. :)

I only realized my mistake when I visited another Photo Hunter's blog! How bad was that! ;(

Teehee -- good point and well said! And thanks for liking the photos. :)

Very nice and how lucky to find two unique pairs like this!

these are beautiful butterflies. the second one is very well captured. :)

Great shots and perfect for the theme. I've only captured one pair of butterflies mating and one pair of large insects. If I'd thought of that I probably would have used those shots for this theme.

two becoming as one! :) my Photohunt is up here.

I think this is cool - and they are such beauties as well.

It's a amazing sometime the time thing on the internet. I know your a day a head of me. I'm on pacific time.

Both butterflies are amazing. The second one I thought at first it was some type of reptilian until I looked at closer.
The first one is sure pretty.

They are real beauties. Pefect for this theme!

Hi YTSL, these are two lovely photos. I love the patterns on their wings.

Magic eyes did butterflies too, they are romantic too?

Thanks, am glad you like the sight of the two pairs. :)

The second pair were obliging -- in that they were doing it in play daylight (in contrast to the first pair which were somewhat obscured by leaves, so one had to twist to take photos of them)! ;b

I've taken photos of at least five pairs of mating butterflies. (And yes, the photos are scattered about this blog.) Have seen even more -- but sometimes, the places where they are can be a trifle hard to photograph! ;)

I am not sure about being a whole day ahead of you but it definitely is the case about being several hours ahead. :)

Interesting that you thought the second butterfly pair might be reptilian at first. Their spots look like eyes, right? :b

Ta for your approval! :)

The story your grandpa told you *is* The Butterfly Lovers. Have you seen the film The Lovers (by Tsui Hark)? It's a beautiful screen version of that tale. Highly recommended.

Oh, wow, you're visiting while on vacation! Thanks for taking the time to drop by during it. :)

Magiceye's butterflies are more focused on food while mine... ;b

looks like u caught them in the act, pretty cool.

Lovely pics. the second one is amazing.

Phew! I was worried that some Photo Hunters might think that the photos were uncool but thus far -- touch wood -- the reaction (like yours) has been pretty positive. Thanks! :)

Yeah, I reckon I most certainly did! ;b

Birds do it. Bees do it. Even butterflies do it!

I have procrastinated for a couple of weeks but finally got around to doing it this week.

The second butterfly pic was quite a great capture of the illusion. :D Here's my Two

I've never actually seen bees and birds doing it but butterflies... oh ya, they most certainly do it alright! As for you: er... I take it you meant participating in Photo Hunt, right? ;D

It's no illusion, it's reality! ;b

Thank you for thinking so. :)