Great day out in the Sai Kung Peninsula 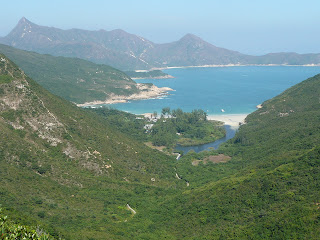 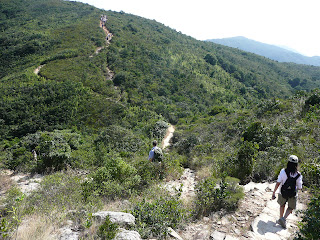 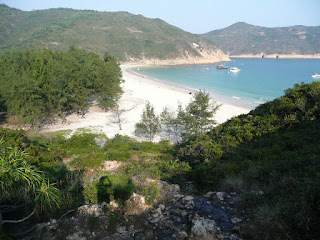 But when a hike takes in vistas like this and a
visit to the beach in the picture (Long Ke Wan), all
that effort really can feel very worth it indeed! :)
Earlier today, three friends and I went on a 14 kilometer hike in Sai Kung East Country Park that took us six and a half hours to complete (in part because we stopped at various times to stop and gawk at the scenery and take photographs, and also for about half hour to hang out on the paradiasical beach at Long Ke Wan).

As might be expected, I feel pretty tired after the day's exertions. But I also feel exhilarated by the experience that involved a lot of physical effort, to be sure, but also had us being out in beautiful surroundings on a day with fine weather (complete with bright blue skies and not too high temperatures and humidity levels).

So before I call it a day, here's putting up this entry -- at whose top are three photos taken while out hiking Stage 1 and part of Stage 2 of the Maclehose Trail in reverse today (i.e., we ended our hike-- rather than began it -- at Pak Tam Chung and began it at the Sai Wan Pavilion that is the terminus for the useful-to-know-exists -- at least as far as hikers are concerned -- village bus NR29).

All in all, I actually would go so far as to state that today's hike was one of the best (in terms of being most satisfying, etc.) I've gone on in Hong Kong. At the same time, based on observing the state of some other people we passed by while out hiking today, I would definitely caution those thinking of going on this trail that they do need to be fairly fit to attempt this hike -- and make sure that they're properly attired and bring plenty of water with them should they decide to do so.

Put another way: quite a few people out there today looked like they were struggling badly to deal with the hike's demands and one woman in particular was in such a bad way -- to the extent that she was gripping on a tree as if for dear life mid way through her ascent up a hill -- that my party agreed that she seemed in danger of passing out mid hike! So, please, people, be prepared and know yourself (including your abilities and limitations) -- and this way, you too can have a great day out in the Hong Kong countryside like my friends and I most certainly had today!! :)

14 km hike is very far. but if the view is like this I think I forgot how many kilometers I have walk. Thanks for sharing.

how I miss autumn in Hong Kong!

Agreed re these views being worth hiking several kilometers to see -- and thanks for appreciating the photos. :)

Sounds like autumn is the favorite season for both you and me. :)

It really helps one's photo taking when the reality is so beautiful. :)

Looks like a very long and steep trail--I have found that when walking uphill over a significant distance I prefer not to see the end of the incline.

But I also feel exhilarated by the experience

Sounds like you hit a blissful trifecta: Lots of exercise so you were awash in endorphins, spending time with your friends and being outside on a lovely day.

The first sections of the hike did involve quite a bit of uphill (some 200 meters worth over one stretch), downhill (some 300 meters worth) and uphill again (another 200 or so meters worth)... but about 10 kilometers or so were significantly flatter.

And yes, I think you hit the nail on the head about the blissful trifecta. Also, I'm glad that you found this post delightful. :)

Love how the white/light color of the sand pops in the last photo. Look soooo inviting.

That beach and its sand was indeed very inviting -- so much so that we couldn't resist stopping there for half an hour... and reckoned it worth while even though it meant that we ended up completing our hike in the dark! ;b