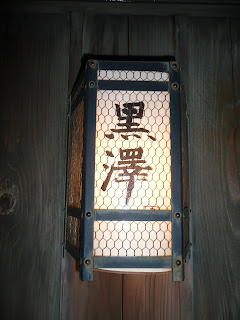 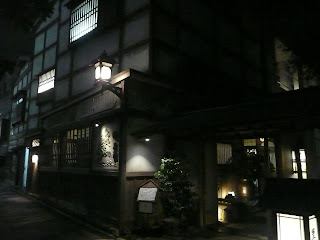 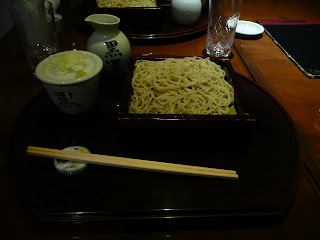 On my previous blog entry about my dining experiences on my most recent Japan vacation, I mentioned my having had dinner at Nagatacho Kurosawa -- the shabu shabu and soba specialist branch of the Restaurant Kurosawa Group established and operated by members of film-making great Akira Kurosawa's family -- and the experience having left my wallet a good bit lighter. Alternatively put: it was the most expensive meal I've ever had -- or at least paid for -- in Japan!

To be fair, I expected this to be so. Among other things, Nagatacho Kurosawa is located in Chiyoda-ku, the same Tokyo ward as the Imperial Palace, the Japanese Prime Minister's official residence, the National Diet Building, the Supreme Court and some fifteen embassies. In addition, the soba we would be eating there is premium handmade soba -- the kind that's got so much substance you feel obliged to eat it slowly and carefully strand by strand for fear of choking to death on it (and yes, a far cry indeed from the light and cheap machine-made soba that far more people are acquainted with!).

Housed in a custom-built three-storey wooden building modeled after a structure in Akira Kurosawa's Yojimbo, the restaurant is the kind that I'd be loathe to enter on my own -- so I was very glad that I would be dining there that evening with a friend (the same one who took me to a baseball game a few evenings before). In her company, I felt more able to relax and soak in the atmosphere of the place as well as leisurely enjoy the delicious food and drink on offer. (We both went for the set meal which had a variety of tasty seasonal dishes build up to the piece de resistance that was the soba (and included a bowl of the soba dipping sauce mixed with hot water!) and had some junmai-shu sake to accompany the food).

A note about the lighting inside the restaurant: It was pleasantly soft and in line with the politely unobtrusive service. For photo-taking, however, I'd actually have prefer to use a flash but it was the kind of place where I would feel like a boor if I were to do so! Consequently, my Nagatacho Kurosawa food photos are on the dim side -- as can be seen by way of the example I've included in this Photo Hunt entry.

Alternatively, I did use a flash when taking the exterior photos but it really was dark that night! Looking at them though, I think the overall darkness adds some atmosphere to the photos -- so much so that I am glad that I went to Nagatacho Kurosawa for dinner rather than lunch and thus didn't see it in the harsh light of day! :)

Very interesting post and great shots to go with it for the light theme. Sounds like a fun experience dining there.

Hi YTSL, I'm so glad that you enjoyed your delicious looking Soba dinner. You are right the lack of light does appear to provide a certain "atmosphere".

And now I wonder where I can find some equally delicious looking Soba in my neighborhood. Probably not homemade and as good.

Sometimes when going out to dinner, I would like to leave my blogger persona at home so that I will enjoy the dinner and company to the fullest.

That looks like a delicious meal. I love the lamp on the first photo.

Love the light. The food looks yummy!
Here’s My Photo

It sounds like a true gastronomic experience! wonderful. Love the soft light.

Thanks, and yes, it was a fun experience dining there -- especially since I'm a film fan as well as foodie. Incidentally, the very first Japanese film I ever viewed was Akira Kurosawa's "Ran". :)

Good luck in finding delicious soba in your neighborhood. Have to say that the soba at Nagatacho Kurosawa was markedly different -- and better -- than any soba I've ever had before. At a glance, it looked the same as much of the others -- but its mouthfeel was incredibly different!

I often leave my blogger persona at home when going out to dinner -- but have to say that I knew this dinner would be special, and thus was intent on capturing it on camera as well as in my memory! :)

Glad you like the lamp. I was told that emblazoned on it are the Kanji characters for Kurosawa. :)

The food was yummy alright! :b

It was a great gastronomic but also overall experience. Am glad you like the soft light. :)

It looks like an amazing dining experience - I always try and have one 'splurge' meal on a trip . . . it makes for such a happy memory!

The food was indeed yummy -- so much so that I'd happily go to that restaurant again. :b

That sounds like a good idea -- to have at least one splurge meal per holiday! :b

Interesting! And great pics for the theme Now I'm hungry :)

my, i'm jealous of your trip to Japan. lovely photos too.

Glad you had an enjoyable and memorable dinner.

I like all the different ties you brought in to the word light. Handmade soba sounds great. I really like the first shot.

The lighting at that place really is lovely, and you've photographed it so well.

Just think of how substantial the soba is... and maybe that might fill you up! ;b

Japan's not that far away from where you are -- and do note that they have quite a few discount promotions going on these days! :b

Thanks for noticing all those different "light" associations in the entry. :)

I'm glad you think I got the lighting right in the photos. :)

Coffee is good - just had a mug worth to wake me up this morning! ;b

Oh my that looks good! Thanks for the visit!

some restaurants are so dark you can't see what you are eating. Ellen Show did a feature on that.

You're welcome re the visit and thanks for visiting in return. :)

I've read about a restaurant -- or at least one special meal in it -- that's kept pitch black, with the idea that the diner will focus on taste alone rather than also such as presentation. I have to admit that I like to see what I eat, so wouldn't like that experience at all! ;b

I'm really enjoying the posts about your trip to Japan. Homemade soba sounds worth paying extra for! Love your take on "light".

Hope you have a great week!

Glad you like my posts about Japan. One quick correction though re your thoughts on the soba one -- it's handmade (but not necessarily homemade) soba that I was going on about. ;)

Hi YTSL, I've been a bit out of the loop in the blog world--somehow life has gotten in the way. However, we are finally heading up to Hong Kong at the end of the month. A trip that I am very excited about. We hope the weather cooperates and our goal is to do several hikes in the area. Any specific/favorite ones that I should look up on your blog? Any other do not miss--activity, food, etc... You can send me a private e-mail at gonzales_ber@yahoo.com.
Thanks for any help.
Maya

Oooo re your Hong Kong vacation plans soon coming to fruition! It's been a rather strange November thus far (29 degrees Celsius this past weekend and now rainy this week) but hopefully the weather will have settled to the normal cool and dry that one associates with this month in Hong Kong.

Re recommendations: for hikes, I'd suggest something in Lantau (Nei Lak Shan Country Trail?), Sai Kung (say, Maclehose Trail Stage 2) and on Hong Kong Island (Hong Kong Trail Stage 8 - Dragon's Back - or one maybe one that takes you up Violet Hill and/or Mount Butler).

Re what else to do: eat lots (different kinds of Chinese but also Japanese and Korean?) and don't forget the culture (museums, concerts, shows at such as the HK Cultural Centre and City Hall), including art house and/or local Hong Kong movies! And I'd also recommend spending a leisure day on one of the smaller outer islands (Po Toi would be a good place to hike and see some amazing sights). ;b