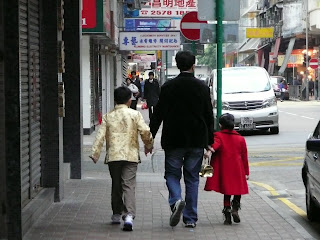 Chinese New Year 2009 in Hong Kong
Yesterday morning, I woke up to the kind of silence that, during typhoon season, would suggest that typhoon warning signal 8 had been hoisted. Because although public transportation continues to run, a lot of shops are closed -- and storefronts shuttered -- during the first few days of Chinese New Year in Hong Kong.

Wandering around neighborhoods, a lot of the street traffic is made up of people on their way to or back from making visits to the abodes of members of the family. And pretty often, you'll see that those people are dressed in red and/or traditionally Chinese attire. (Re the photo above: I like how the dressing "burden" was spread between red-coated sister and traditional Chinese-jacketed brother!)

Since Hong Kongers don't have an "open house" tradition like Malaysia, I count myself privileged that this Chinese New Year, not only was I invited to visit a Hong Konger friend's abode -- like I was last year -- but I also was invited to have dinner -- cooked my her mother -- with her extended family.

Something else that looks to be becoming a tradition for me during Chinese New Year is to go out for a hike in the hills to enjoy the crisp seasonal air as well as greenery (like I did earlier today). And although it may seem unlikely, there actually are a fair few Hong Konger families whose Chinese New Year activities include a walk out -- and/or barbecue -- in a nearby country park! (Not one's stereotypical image of Hong Kongers -- perhaps especially during Chinese New Year -- but that's the reality of it!) ;b)

Wonderful photo of the family from the back. Love the gold purse the little girl is carrying. Dress up the kids while dad dresses down in jeans.....fun.

Thanks, and happy new year of the ox to the both of you too! :)

If you're wondering, I *have* seen men in red (ski-type) jackets over the last few years. Or wearing red scarves. But, yeah, for the most part, they do tend to favor way somber colours and dress down compared to women as well as children! ;)

Did people serve ox tail soup for the celebration?

YTSL, happy ox year to you.

People are more likely to serve food whose names make them sound auspicious due to the tonal system, actually! Also, FWIW, the Chinese don't distinguish between 'ox' and 'cow', so this actually is the year of the cow too -- and by your reckoning, people should have been eating lots of beef too! ;D

Thank you, and happy new year of the ox to you too. :)