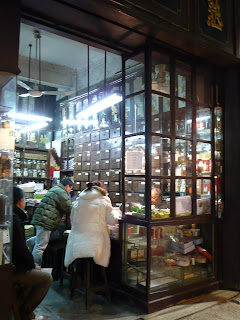 Down jackets and coats are a common sight
in Hong Kong these days (BTW, if I'm not mistaken,
this is the Chinese pharmacy in Dry Wood, Fierce Fire!) 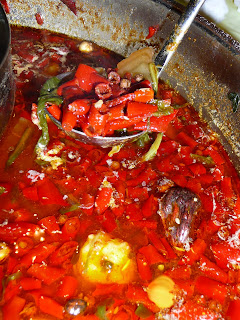 Another local method of warding off the cold:
scarily spicy hot pots!
Say the word 'tropical' and images of a warm (even hot) place come to mind. Ditto, I'd wager, with the word 'sub-tropical' which is used to describe the climatic zone which Hong Kong is -- and such as Savannah, Georgia, and California but also Auckland and parts of Russia are -- in.

Nonetheless, Hong Kong winters can feel pretty cold. This especially since the buildings here tend to be built to be cool in summer (rather than warm in winter!). And this even before this winter during which Hong Kong is (currently) experiencing its coldest spell for sixteen years!

Of course, it's all relative though -- in that there's no chance of snow falling on the ground and Hong Kong probably would only freeze over around the same time as hell itself! Still, believe you me when I say that I've actually reached the point where I'm donning thermal underwear again (for the first time since I left Philadelphia) and have taken to sleeping under four layers of admittedly thin blankets on my bed at night.

At the same time, however, I don't think I'll be donning any down jackets, never mind lengthy down coats, any time soon. Or eating hot pots filled with more red chillies than surely can be healthy for anyone!!! (For the record, when a fellow foodie friend and I went to eat hot pot one cold evening, we got the 'yin and yang' version which allowed me to dip my slices of mutton -- considered 'warming' by Hong Kongers and consequently a popular meat to eat in winter -- and such into a clear soup while she went for the super spiced-up soup option shown in one of the photos above!)

As much as I want to believe that that is the same shop from Dry Wood, Fierce Fire, I've got to ask: aren't there dozens of shops like that in that part of the world? I can think of at least one in this part of the world too -- in the largely Vietnamese Eden Center in Northern Virginia (there are a handful of Chinese shops in that complex as well).

Bourdain went there in his upcoming DC episode which is otherwise lackluster if you've ever been in this area -- crabs in DC not Annapolis or on the Eastern Shore? Who is Tony's producer?

It will be so cold here this week before the swearing-in that I may seek out some kind of hot pot myself!

Though Vermont is cold in winter it's a dry cold. I find the damp cold of cities on the ocean much colder even though temperature wise they aren't.

The hot pot looks like it would burn a hole in my stomach.

I want to taste this hot pot right now!!! GREAT photo, it feels as if I can reach out and laddle a bowl:)


Thanks for the pic and here it is cold too and the heavy coats are not optional. Sadly since Istanbul (especially the area I live in) is by the sea and we get the cold with humidity which is the worst!

(I miss our vacation together, we should do it again sometime:) )

Actually, there are fewer shops that look like that in Hong Kong then you might think... also, Tim Youngs told me that "Dry Wood, Fierce Fire" was filmed in Kowloon City and Kowloon City was where I took that photo. So there really is a pretty strong chance that it is *the* shop.

On a food note: if not crabs, what would you recommend that Tony eat in DC? (Maybe you should write a blog entry on precisely that!)

And speaking of hot pot: I just had hot pot again this evening! ;b

Teeheehee, yes, great weather for flannel shirts. Alas, I only have one left -- having given the majority of my shirts away to Salvation Army shortly before I left Philadelphia! -- and they don't seem to have flannel shirts for women over here!

OTOH, they do have nice Chinese silk jackets. And I've got one that I think of as a kungfu jacket which is ever so warm but also cool (if you know what I mean). ;)

Better you than me re that spicy hot pot. Like sbk, think it'd burn a hole in my stomach!

And re the idea of meeting up again: So... anyone coming over to Hong Kong for the HKIFF or something else this year? :b

It's like below -20 degrees including the windchill in Toronto. :(

Love the super spicy hot pot photo--while it might burn a hole in my stomach it would still be great right about now here in the frozen wastes of Michigan where the temperature has climbed above zero for the first time in what seems to be many days. Of course the snow started immediately.

This is a lovely blog which I keep stumbing upon but now have firmly bookmarked in both browsers.

Aaah, memories: of being in a place and time where it would be so cold that it couldn't snow! And thanks for the warming comments about enjoying my blog. You're very welcome to keep on visiting -- and commenting too. :)