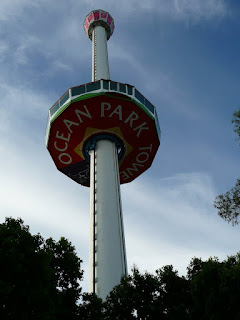 Thirty years ago, my parents brought me on my visit to Hong Kong. Child that I was then, one of the places that I remember that they took me to was Ocean Park. Opened on 10 January 1977, this amusement park on Hong Kong Island (that sections of Moon Warriors was shot in!) is still going strong -- and, despite initial fears that it would be overshadowed by Hong Kong Disneyland, actually has been attracting more visitors annually than the American import.

And although I have to say that it's not been a top priority place for me to check out as an adult, this past weekend, a friend convinced me to go spend a day there with her. And sue me but I actually did end up having quite a bit of fun there (and not just with my camera either -- though, yes, I took enough photos to make me reckon that this recent visit merits a photo-essay to memorialize it)! :b 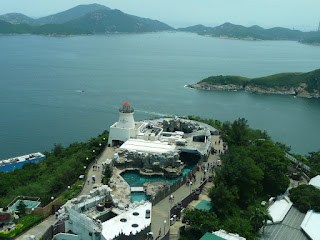 As its name suggests, Ocean Park is located
close to a major body of salt water (though,
strictly speaking, it's a sea rather than ocean) 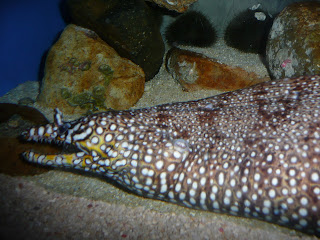 And it does have some showcases
for marine life (like this bizarre looking creature!)
among its attractions 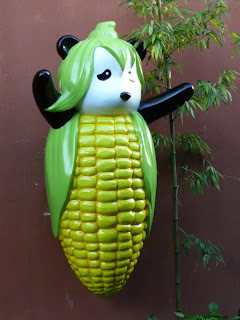 These days, though, its most famous attractions
are its four giant pandas -- but, alas, seriously weird
panda-corn figures like the one in the photo
were the closest I got to seeing any pandas on this visit! 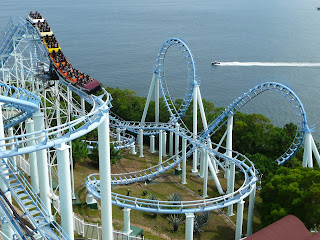 Rollercoaster fan that I am though, a greater attraction
for me was The Dragon which, among other things,
gets it riders going upside down not once but thrice! ;b 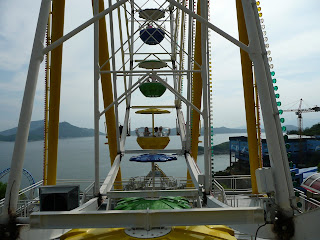 To calm down after that rollercoaster ride,
my friend and I went on the sedate --
even if colorful -- ferris wheel nearby 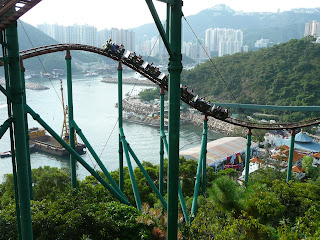 Soon, though, it was time to go on The Mine Train:
my single favorite Ocean Park attraction
-- and yes, its close-to-the-ocean's-edge location
definitely added to this rollercoaster's thrills quotient! :) 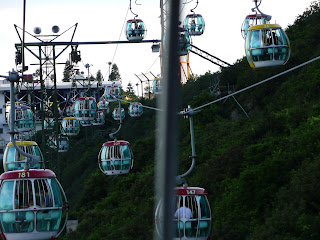 One of my abiding childhood memories of Ocean Park
is of its cable cars -- and yes, they're still there
and really plentiful as well as
do offer a pretty scenic ride indeed! :)

Looks like you and your friend had a great day!!! Rollercoasters scare me s***less but the cable car ride looks like fun. Ferris wheels too-I'm a real chicken. I've seen it from a bus-is it as picturesque as it seemed to be?

Did Hello Kitty get to go on any of the rides with you?

Sorry the "is it as picturesque..." refers to the cable car ride not the ferris wheel.

The panda corn seems pretty weird to me.

Yes, think it's safe to state that both my friend and I enjoyed our (temporary?) regression to childhood this past weekend. As for Hello Kitty: I had a Hello Kitty handkerchief with me during the visit to Ocean Park -- does that count as her going on the rides with me for you? ;b

Ocean Park was never an attraction for me in HK but very glad that you had a nice day and the pics are very nice.

(actually one time they had to stop the gondola that my then BF convinced me to get on since my blood pressure went dangerously low!!)

So Ocean Park was in Moon Warriors? I'm guessing the part with Andy Lau and the killer whale?

Wasn't it also featured in one of the Twins movies? Maybe Summer Breeze of Love? (If I'm right, how sad is that that I can remember that?)

The panda corn thing is disturbing.

I can see how Ocean Park would be a low priority for you when in Hong Kong -- this especially after you have shared your (literally) ill feeling about thrill rides! ;b

Yup, you guessed right -- and the killer whale was from Ocean Park too! :)

Re it featuring in other Hong Kong movies: No doubt but sorry, can't recall whether it appeared in a Twins movie! ;D

As for the panda corn: About the only explanation I can give for such a thing is that Hong Kongers seem to like both corn and pandas a lot! :DDD

I'd really like to visit this park one of these days. Wonder when I'll ever get out to HK again. *sigh*

No roller coasters for me though!!! Sloshing brains no my idea of fun. haha

How often do you visit Hong Kong? Hope you'll visit again before too long. And what a shame you don't care for rollercoasters -- especially as there are so many great ones in your country!

For us USA Midwesterners where corn dominates the landscape:

How does one get a Pana-thro-morphic corncob?

I guess your best bet would be to get yourself across the Pacific and visit Hong Kong's Ocean Park! ;b