This past December, I visited Taipei -- and Taiwan -- for the first time ever. Before going, I only knew of it through movies (1970s efforts starring Brigitte Lin Ching-Hsia but also works by the likes of Hou Hsiao-Hsien, Edward Yang and Chen Kuo-Fu along with Johnnie To (Turn Left, Turn Right) and Wong Kar Wai (a small but memorable section of Happy Together) and writings, both non-fictional and fictional. And from conversations with friends, including a Taiwanese house-mate back I had for a time in Philadelphia and a Taiwanese couple who were my landlords for three years in that same American city.
From what I gleaned from these various and varied sources, part of me was expecting to see a place that would be a cross between Hong Kong and Mainland China. In many ways, that was indeed what I discovered it to be. At the same time though, I'm surprised at how much more along the Mainland China end of the scale it felt like... that is, if such could be said of a place that also reminded me of Japan in some other ways.

All in all, I'm not sure whether this perception can be conveyed by way of the photos I took, and have selected for inclusion in this second Taipei photo-essay on this blog. In any event, however, hope that you'll find what I captured with my camera to be of interest (and -- hint, hint... ;b -- worthy of comment)... 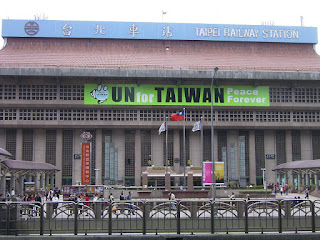 Taipei's main railway station,
complete with reminder that Taiwan wants
to be a part of the United Nations
but has yet to have its petition to do so accepted 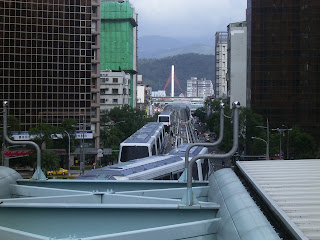 Taipei's very good public transportation system,
complete with over- and under-ground trains,
makes travelling around it easy enough,
even for foreign visitors 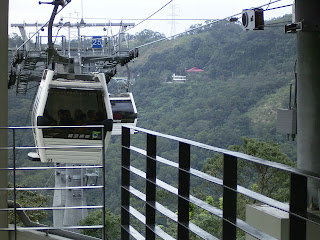 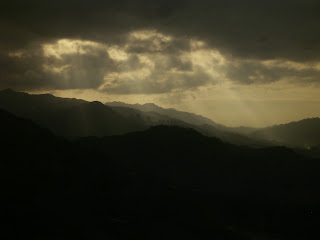 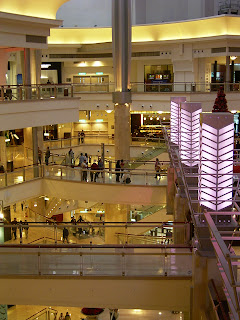 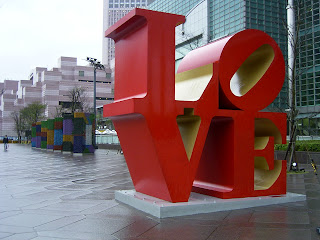 Yes, Philadelphia really is not the only city
that is home to a bright red Love sculpture! 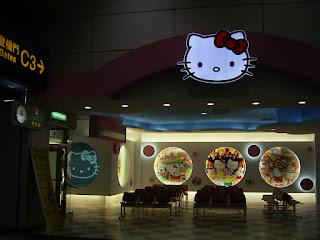 OTOH, I'll willingly believe that
Taipei's international airport is the only one around
with a customized Hello Kitty gate! 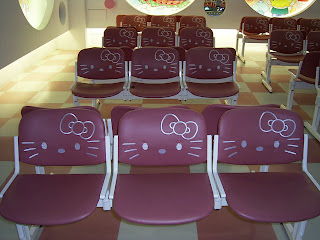 To get a sense of how Hello Kitty-fied
that part of the airport is,
take a look at the seating over there... ;D

Now you must love Taibei more because of Hello Kitty, your LOVER!

Uhhh, I adore Hello Kitty but I really wouldn't go so far as to consider her my LOVER!!!!! :DDDDDD

Wow, a Hello Kitty gate. What a fun theme. Is this 'just' a gate or is it reserved for Eva Air's Hello Kitty plane that, if my information is correct, flies between Taiwan and Japan?

LOL on the Hello Kitty area. Why??? haha.

Those were some great photos. I like it that you gave us a range of indoor and outdoor shots. How cool that the gondola is part of the public transportation system.

Wow, that Hello Kitty gate is...I'm not sure what adjective I'm looking for. Fun, perhaps? It's certainly more interesting than your typical airport gate, and much, much cuter. I'm glad you got to see it and shared the photos.

Speaking of Hello Kitty, we had to buy a birthday present for a little girl turning 3, and I happily turned to Hello Kitty and other Sanrio products for some options when we saw the display in the toy store. I thought of you.

Like sbk, my first assumption was that the Hello Kitty area was a tie-in with Eva Air's Hello Kitty plane but...

Glad you like my Taipei photos. And speaking of Hello Kitty: I have to admit that I've currently got my new (Horlicks drink-filled) Hello Kitty mug -- acquired just this past weekend! -- next to me as I type out these responses... :)))

I rarely go anywhere and watching movies seem like a way to travel without the hassles. And reading blogs like these is also sort of traveling and the pics really enhance that feeling. So thanks. And yes, sometimes I don't read the words but instead only look at the photos but I don't always skip the reading.

BTW - That Love sculpture is here in New York also.

Interesting comments, especially about watching movies being like a way to travel without the hassles. Probably true enough except that sometimes, I want to go to places after seeing them featured in movies (prime examples: Austria (because of THE SOUND OF MUSIC) and Hong Kong (because of oh so many movies!). :)