Hong Kong guards against the Wuhan coronavirus as it continues spreading like wildfire elsewhere, including Malaysia 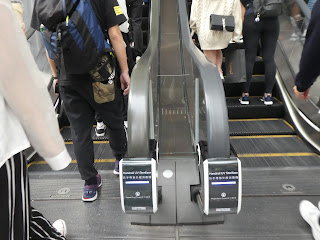 The kind of anti-infection measures that people in other parts
of the world might think excessive even now... 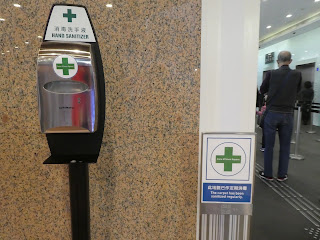 ...but which I do find assuring to see when out in Hong Kong 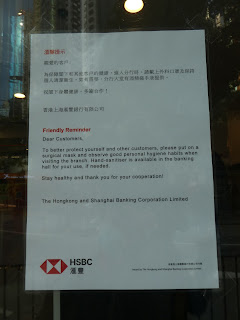 And I don't know what's the situation at your local bank
but these kind of measures have been par for the course
in this part of the world for some weeks now!

I was in Causeway Bay yesterday evening and found it more crowded than it had been in days, weeks, even months. I'm not sure whether it's because people collectively felt a need to venture out after suffering cabin fever (or, perish the thought, complacency has set in in the midst of the effectively congratulory articles that have come out in recent days about Hong Kong's having limited the spread of the Wuhan coronvirus within its borders), on account of their having stayed at home so much these past few months.  In any case, I must admit to finding it all a bit offputting -- even while realizing that, yes, I was contributing to the numbers out on the streets, etc.!

At the same time though, I did feel assured by the high percentage of people wearing masks -- and also by the other preventative measures in place. And while some might dismiss the likes of the ready availability of hand sanitizers and the sanitization of carpets and escalator hand rails as cosmetic, they do make me feel safer in Hong Kong than I'd be in a whole lot of other parts of the world right now.

For the record:  Hong Kong's total number of confirmed Wuhan coronvirus cases rose to 145 with four more having been added to the tally today and five the day before.  But I reckon it's saying a lot that its most recent cases of infection by the Wuhan coronavirus have involved people who had recently travelled outside of Hong Kong (including to Britain and USA).

The last time I looked at the worldometer's Coronavirus page (i.e., a few minutes ago), the USA had 3,083 confirmed Wuhan coronavirus cases (2,967 of them active) and 60 deaths while the UK had 1,140 confirmed cases (1,101 of them active) and 21 deaths from the deadly disease.  Those numbers may still be dwarfed by those of Mainland China (with over 80,000 confirmed cases of infection and 3,199 deaths), Italy (with over 21,000 confirmed cases and over 1,440 deaths) and Iran (with close to 14,000 cases and more than 720 fatalities) -- but a sure sign that what's happening in Britain and the USA is concerning people can be seen in the Hong Kong authorities having decided to add those two countries to its list of territorities that people travelling from will be required to be quarantined after they arrive in Hong Kong.

Another country whose Wuhan coronavirus trajectory is alarming me is Malaysia, whose total number of confirmed cases of infection hit 428 today after the country recorded its biggest daily jump in cases today with 190 new positive test results.  What makes things particularly upsetting to me is that the bulk of these cases are linked to a cluster involving a religious gathering of some 16,000 people at a mosque in Kuala Lumpur that took place from February 28th to March 1st -- close to two months after word had got out that a mysterious disease was infecting a hell of a lot of people over in Mainland China, and after the Wuhan coronavirus already had infected people in Malaysia along with a good number of other countries globally!

As things stand, only 4,492 of that ijtimak tabligh's Malaysian participants have been identified; of which just 3,206 of them have been tested.  This means that there's a lot of people to be found and tested -- and, in all likelihood, test positive -- still.  Disturbing as well is the realization that some 1,500 of the participants hail from other countries in the region.  Put another way: The participants and organizers of that event look to have contributed to an international wave of infections -- and, with it, no small amount of suffering and possibly some deaths -- and endangered goodness knows how many people by their willful ignorance.  They should be ashamed of themselves, and so much more.

Something else I can't help but think and rue is that maybe this all would not have happened if the Pakatan Harapan government were still in place.  After all, it had a health minister widely adjudged to be doing a great job.  Instead, alas, Malaysia currently has a backdoor government that doesn't have much credibility; this not least because it is riddled with "Malay first" "nationalists" (racists), hardline Islamicists and suspect individuals from the discredited regime of the infamously corrupt Najib Razak, and one of its head's first moves was to postpone the next sitting of the Malaysian parliament from early March to May 18th!
Posted by YTSL at 11:59 PM

Last I heard there were only five cases in my state. I can say we're living in interesting time.

Count yourself lucky but, at the same time, please be on guard and take the necessary preventative precautions against the Wuhan coronavirus. I know that the US government has already declared a national emergency but the public needs to play its part too -- and more if you think the government isn't doing a good job.