Still remembering and caring 28 years on 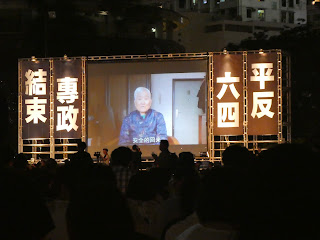 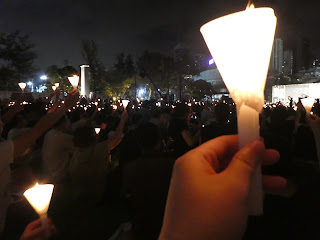 A sea of candles at Victoria Park at this evening's vigil


For 28 years now, come rain or dry but super hot weather, thousands -- if not hundreds of thousands -- of people have gathered at Victoria Park for a candlelight vigil to commemorate a series of events which began with hope being kindled in early 1989 but then ended horrifically in the summer of that year.  Each year, on the anniversary of a historic massacre wrought on civilians by their nation's own military -- ironically called the People's Liberation Army -- and in their national capital's most iconic public space, Hong Kong remembers and voices out loud what people over in Mainland China cannot.

"Vindicate June 4th!  End dictatorial rule!  Release the dissidents!  Rectify the verdicts on the 1989 movement!  Demand accountability for the Tiananmen Massacre!  End one-party dictatorship!  Build a democratic China!"  These were the demands -- or, rather, hopes voiced out loud -- made by those who turned Victoria Park into a veritable sea of light this evening.  Also: "Lament the massacred pro-democracy fighters!  And carry on the spirit of the martyrs!"


In the years since the first 79 days of the Umbrella Movement, when hundreds upon thousands of Hong Kongers take to the streets after the Hong Kong police let off 87 rounds of tear gas into a crowd of un-armed pro-democracy protesters, some younger folks have decided to narrow their focus and seek democracy and other rights only for Hong Kong rather than China as a a whole.  Among their reasons for thinking this way is their no longer feeling Chinese as well as being adamant that Hong Kong is not like the rest of China.

My reply to them is that one doesn't have to feel or be Chinese to want justice to be served with regards to the events of June 4th, 1989.  And even if these misguided young people somehow are unable to see parallels between their aims and those of the people, many of them young and students, who camped out in Tiananmen Square in the summer of 1989, surely they are capable of feeling sympathy for the Tiananmen Mothers: at least one of whom speaks (via video) at the annual candlelight vigil at Victoria Park on June 4th.


The sight of these long-suffering as well as courageous group of Chinese pro-democracy activists -- many of them white-haired and so very obviously elderly now -- regularly chokes me up and often reduces me to tears.  I feel so very sorry for what they've had to endure even while I admire and respect their resolve.

I long for that the day when those of them who are still living (with 48 no longer being so) will be able to properly mourn their children and see the reputations of their deceased offspring to be officially rehabilitated in Mainland China itself.  Until then, we remember with sorrow what happened to those young idealistic souls, try to honor their memory and hope that by doing so, that particular ignominious section of history will not repeat itself on Chinese soil.
Posted by YTSL at 11:52 PM