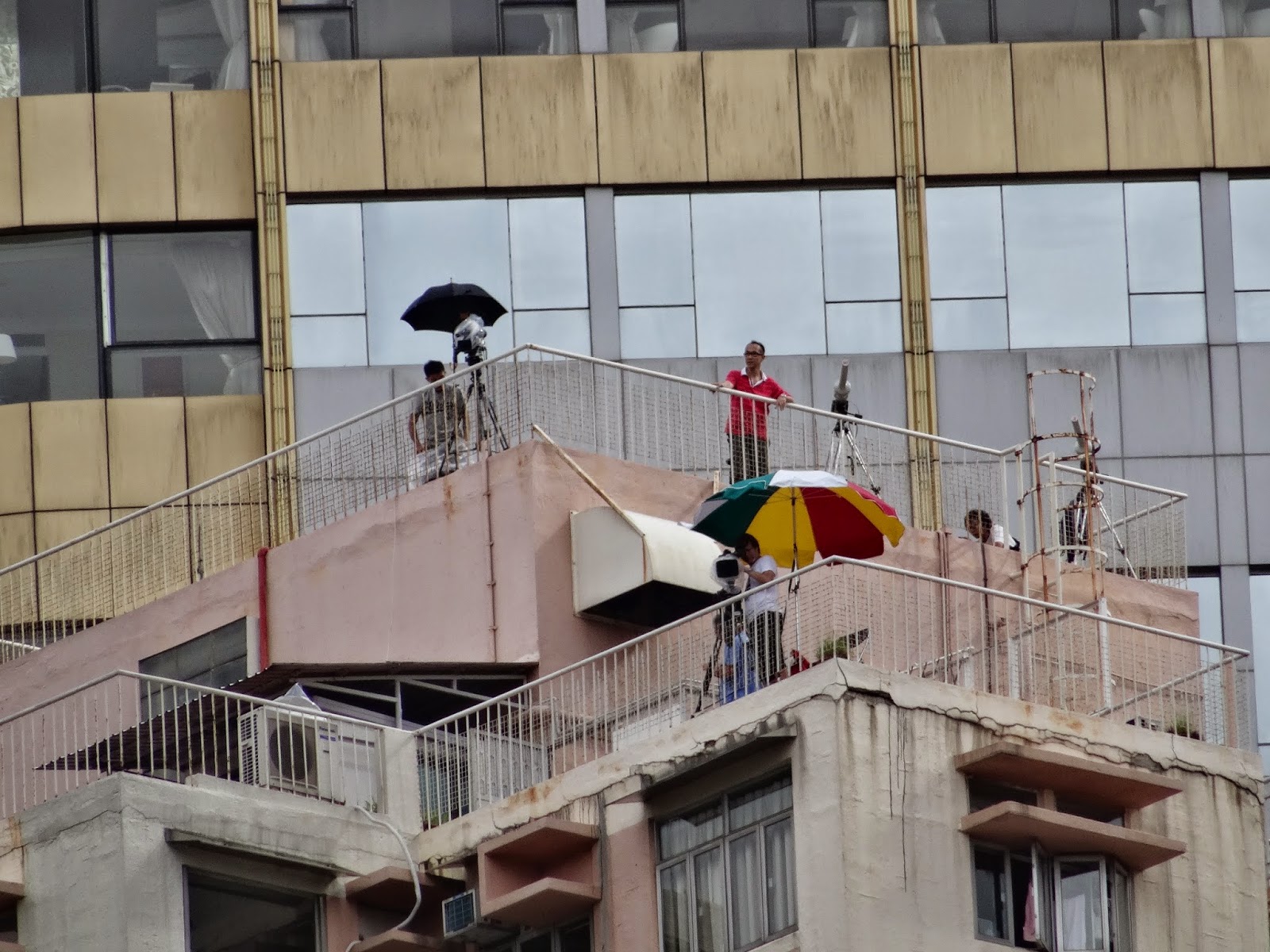 What were these people on the top of a high building
looking at and recording? 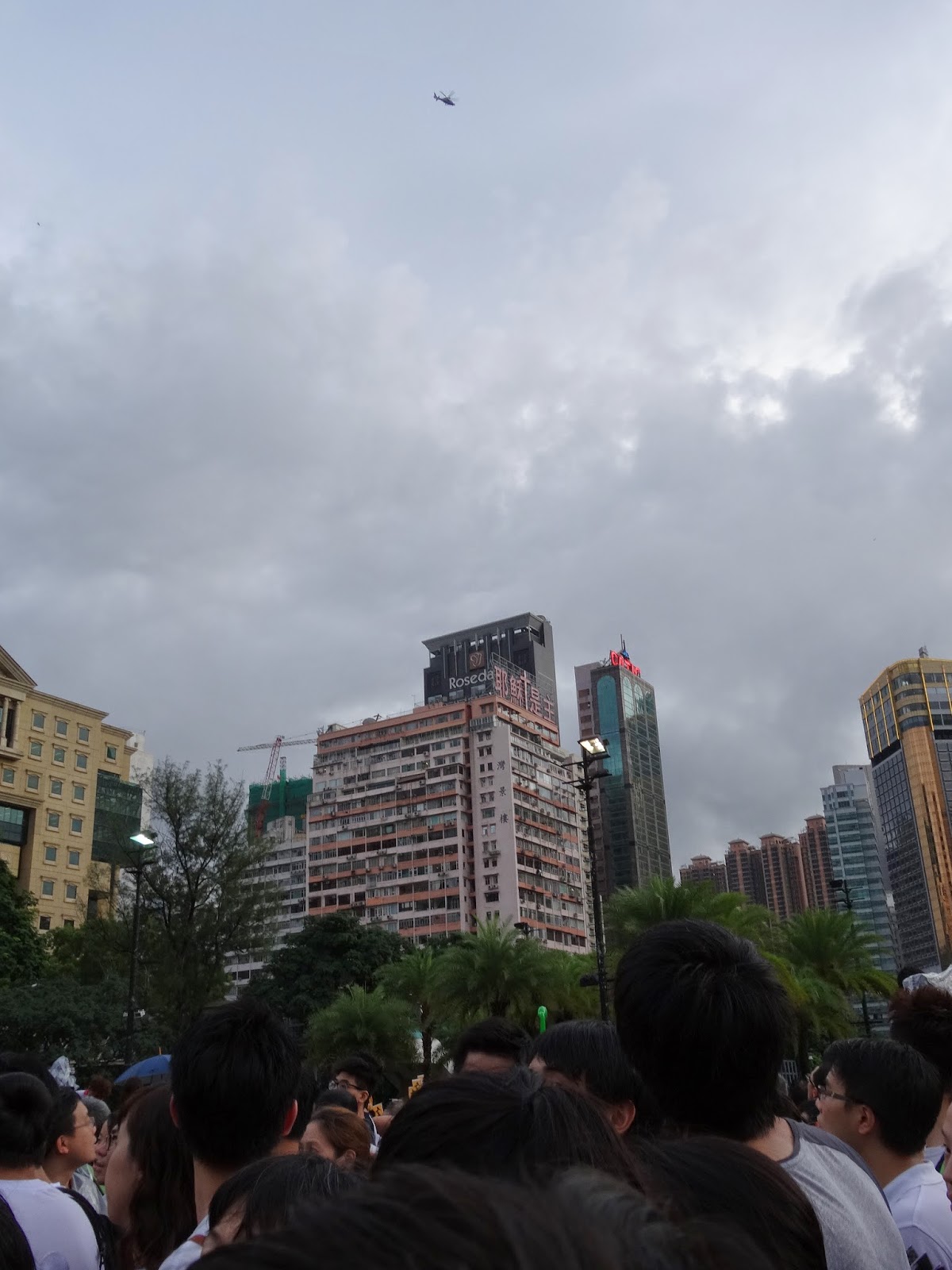 The same thing as the helicopter in the picture --
that is, the huge crowd assembled at Victoria Park
on the afternoon of July 1 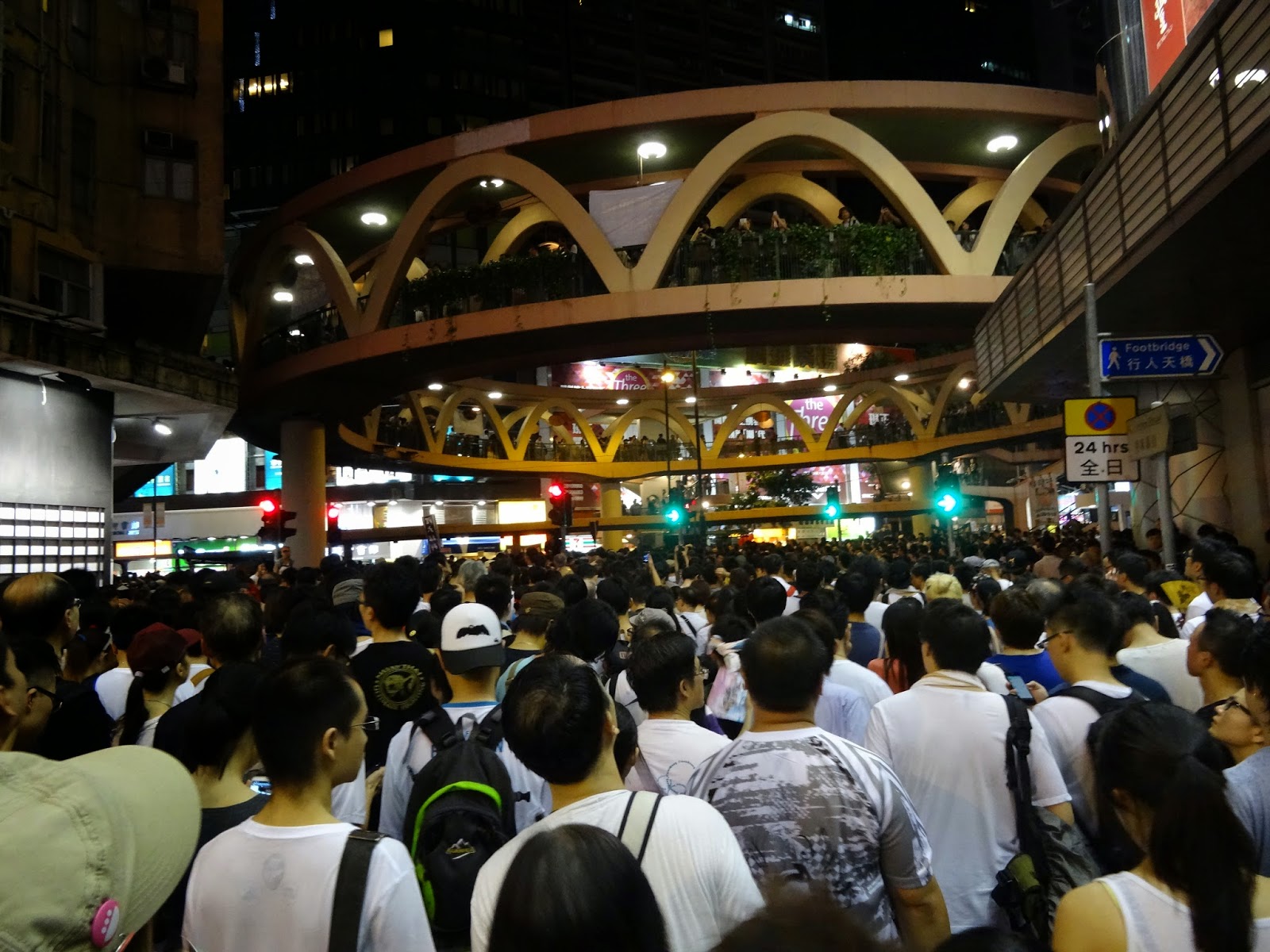 The crowd was so large and thick that some people were still in
Victoria Park, never mind nearby Causeway Bay, come night fall 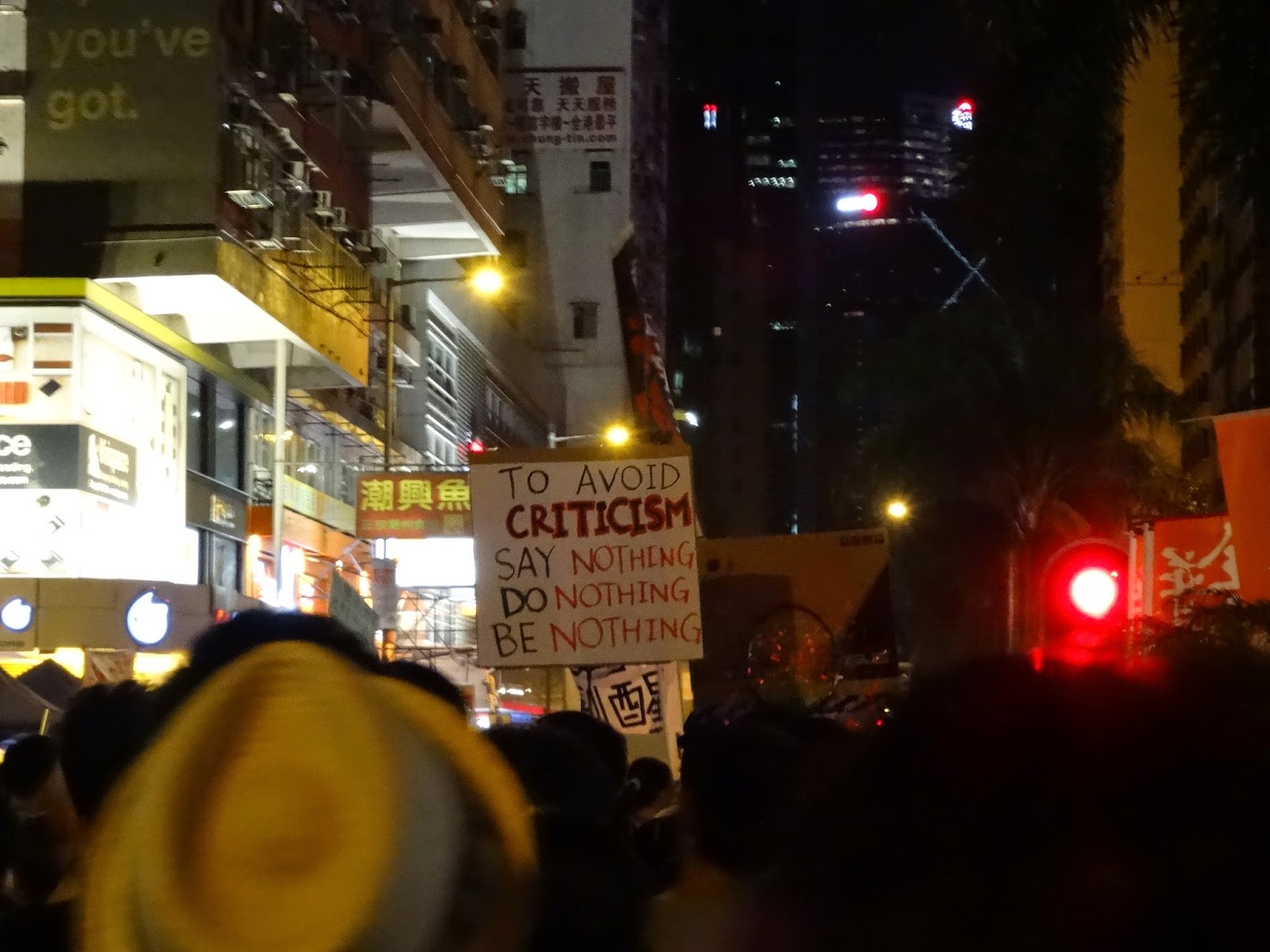 The mass of people at the July 1 march are determined
to not say, do and/or be nothing

Last year, there was a typhoon warning.  This year, it was a thunderstorm warning.  And yet the people went in large numbers to take part in the annual July 1 protest rally to make sure that Hong Kong voices are heard, and to demonstrate that -- unlike in much of the rest of China -- people remain free (for now) to protest and stand up and be counted.

On July 1, 2013, a friend and I entered Victoria Park to take part in the July 1 march at around 2.30pm and didn't get out of the park until close to 2 and half hours later.  So this year, we decided to try a different strategy -- i.e., head to the park after the march had officially got going -- in order to not spend as much time stuck standing around in the park.


Thus it was that we met up with three other friends (including the blogger behind The Fragrant Harbour) at 3.20pm (i.e., 20 minutes after the official start of the rally) a few minutes' walk away from the Tin Hau entrance of Victoria Park, with things initially looking good in that by 3.40pm, we were already in the park.  However, instead of being directed to the football pitches after getting into the park as had been the case in previous years, we found ourselves being directed to the Central Lawn area and found ourselves stuck there for at least one hour as that grassy section of Victoria Park filled up with fellow demonstrators.


While we waited for our turn to exit Victoria Park in order to take part in the march proper, rain started to fall for the first time that afternoon.  The second time a fresh batch of rain poured down, my friends and I were under the trees in between the Central Lawn and the football pitches.  And while it didn't do so when we finally were on the football pitches, we actually were there so long that it wasn't until close to 7pm before we finally left the park due to there being that many people ahead of us who shared our aim of assembling at there to be counted and then heading out of it to march all the way to Chater Garden over in Central.


I can imagine how tempers would flare and boil over in many other parts of the world if people had to wait as long, and were penned in such close quarters, as us.  But one of the great beauties of Hong Kong protest rallies (be they on July 1 or June 4) is how well behaved the crowd really is.  (And yes, there were moments today when I was brought close to tears by witnessing this -- as well as by the emotional renderings of songs that also get sung on June 4 along with renderings of the Cantonese version of Les Miserables' Do You Hear the People Sing? and John Lennon's Imagine.)


In previous years that I've taken part in the July 1 march, the trams were still running when I got out of Victoria Park.  This year though, the tramlines were already opened up to marchers in front of Victoria Park.  And yet for much of the way through to Wan Chai, we were going at a crawl rather than walking freely -- because there really were so very many people taking part in the march who were visibly ahead of us, alongside us and behind us!


Consequently, at 8pm, we still weren't past Sogo, at 9pm, we were barely into Wan Chai, and we didn't get to the march's end (i.e., Chater Garden) until right around 10pm.  Put another way: it took us more than 6 hours to get from Victoria Park to Chater Garden; and not only were we actually patient and game enough to persist and do just that but so were (hundreds of) thousands of others!

More than incidentally, I've read that the police have estimated the march attendance as 98,000.  To this I say: hogwash -- and I think that's being polite!  Instead, I truly believe that there were at least three times, maybe four times, or even five times, as many protestors out there this July 1 in what most emphatically is not just another Chinese city.  At the very least, I know that this was by far the best attended event I've ever been a part of -- and considering that I've been at an international match at the old 100,000 capacity Wembley Stadium as well as a World Cup match at 75,000 Giants Stadium along with a number of June 4 memorial events now, that really is saying something!
Posted by YTSL at 1:22 AM

Your photo-essay certainly communicates the size (definitely not for the claustrophobic, though) - and spirit of this event. Only a HK resident is qualified to even speculate on the immediate and near future state of political freedom in HK...However, speaking as one of the innumerable HK watchers in cyberspace, I'm optimistic about the longterm future of HK...

Population growth and modern transportation are increasingly linking HK, Macau, Shenzhen and Guanghou (described in a local HK newspaper as "agglomerations", "megaregions")...As this happens, I think Hong Kong's tradition of business savvy individuals, many with formal educational credentials - gives this city the competitive edge to survive as a cosmopolitan and international urban center.

Absolutely re the July 1 march not being for the claustrophobic -- and also people who can't stand around as well as walk for hours. So it wsa amazing that so many people were up for doing so that day.

I wish I could be as optimistic as you about the long term future of Hong Kong. And because I want Hong Kong to have a good future, I march(ed) on July 1.