What I had for dinner on my first evening in Kanazawa 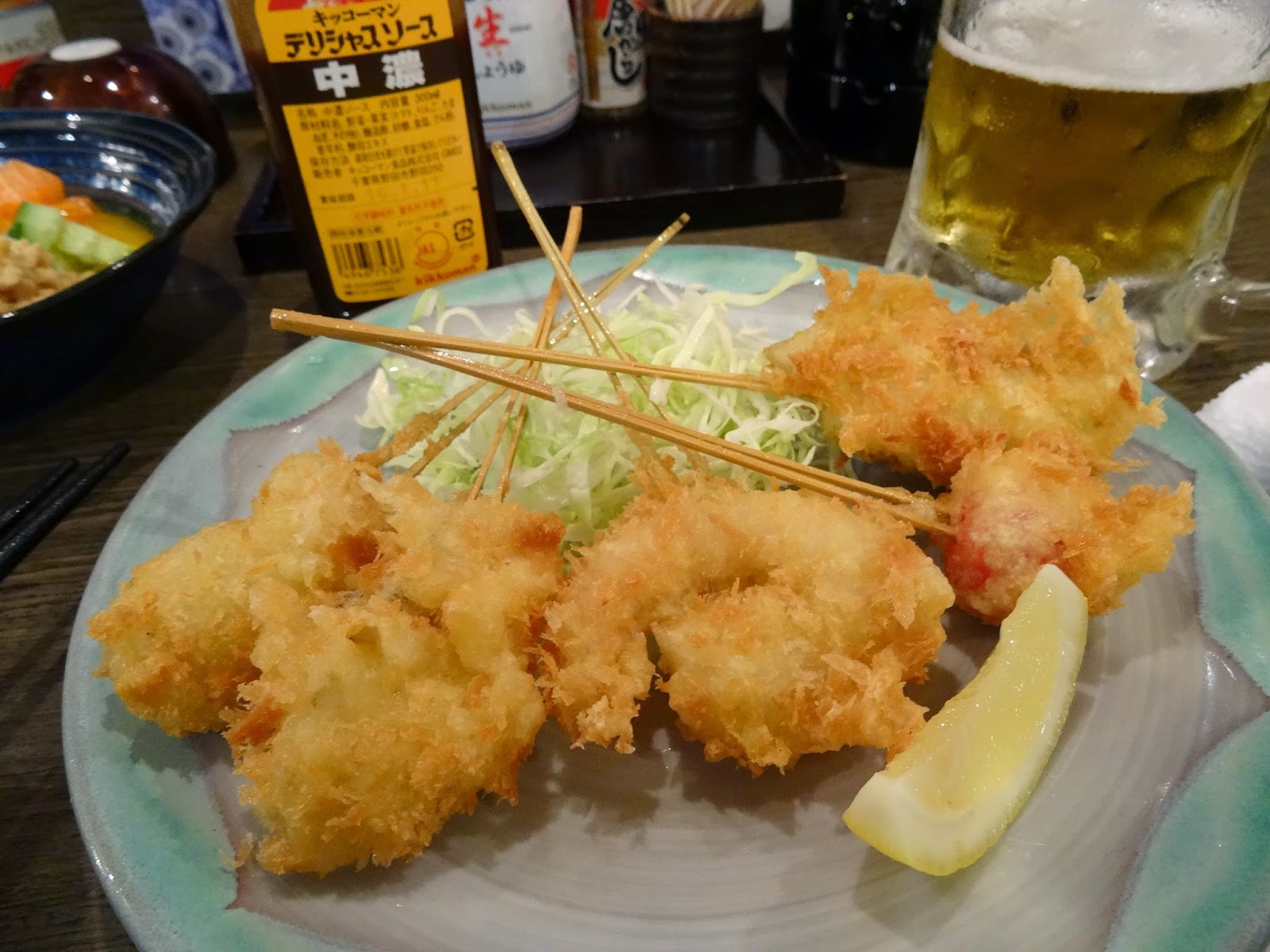 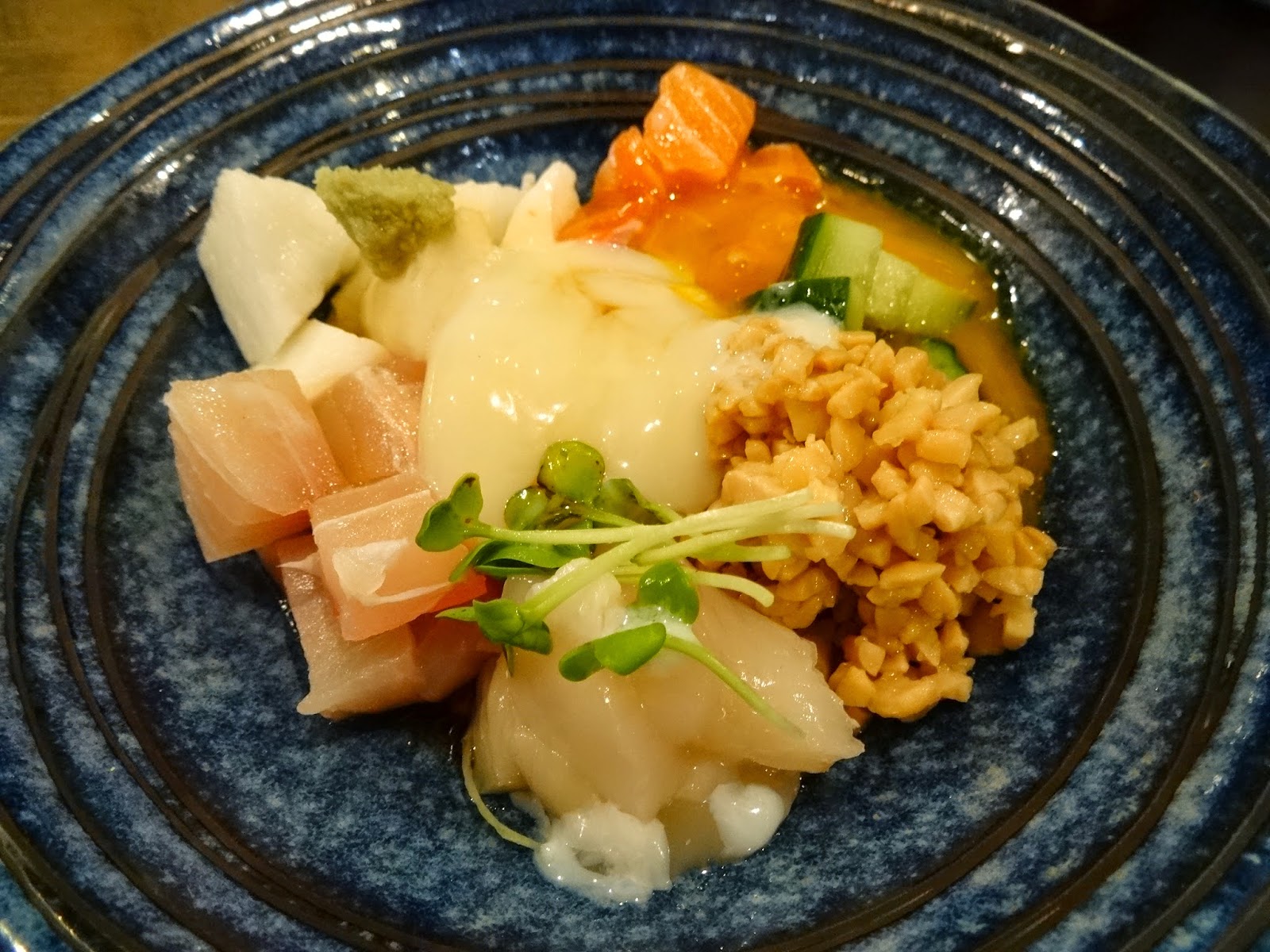 It may not look particularly appetizing but trust me
when I tell you that it's delicious! 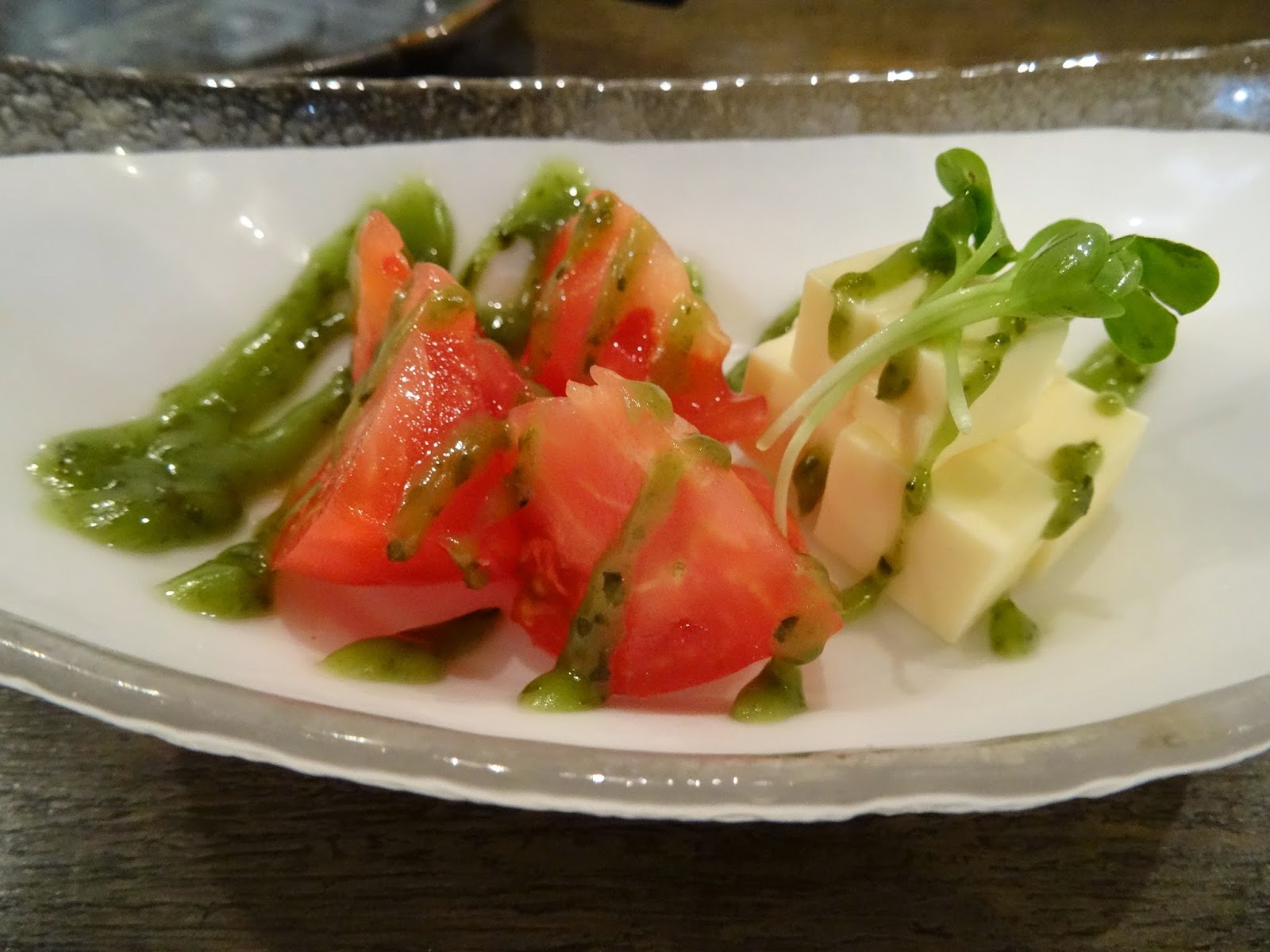 Not something that's traditionally Japanese
but, again, I found it pretty yummy! :b

Before I headed over to Japan last week, I told a friend that I planned to eat sushi every day.  What I didn't tell her was that I also was going to make sure I had me some kushiage on this trip -- and as it turned out, I ended up having this less well known type of Japanese food -- and one that's also less readily available in Hong Kong -- at as many meals as I did sushi.

Shortly after arriving in Kanazawa (and even before I went to check in at my hotel), a ravenous me headed straight from the train station with baggage in tow to the branch of Mori Mori Sushi in the Forus shopping center located just a few minutes' walk from the station.  But although I liked that I had a taste of kaiten-sushi in the part of Japan with which it's associated, I have to say that it was probably the least satisfying meal that I had on this trip, and this despite its selection including an innovative and delicious gunkan maki offering that contained both raw quail's egg and natto.

In contrast, I thoroughly enjoyed my dinner at an izakaya I chanced to head into because I liked what I saw of its picture-rich menu, only to discover that it had a wonderful 299 Yen for a mug of draft beer special promotion going on!  Almost needless to say, I did imbibe at that welcoming branch of Yoronataki that evening.  But, truly, it was the food that made my evening -- and got me deciding that it'd be a good choice of eatery to eat at again before I left the city (not least because my dinner bill ended up being just around the 2,000 Yen mark!).

After ordering my first mug of nama biru, I set about ordering a dish of kushiage moriawase (assorted kushiage -- and yes, moriawase is a very useful word to know when ordering food!) -- which turned out to be five sticks that included tomato, shrimp and various meats.  It may all look like regular frittered food -- but I am being honest here when I say that I love what can come across as a cross between yakitori and tonkatsu far more than I do such as English fish and chips or even Japanese tempura.


For textural contrast, I went with a dish that had gooey Japanese mountain yam at its center and chunks of raw fish and scallop along with its natto, cucumber and other edibles to mix with it and consume.  Although this was one dish that's far from aesthetically pleasing, it truly was one that I found really delicious -- so much so, in fact, that it caused me to make audible sounds testifying to the pleasure that consuming it gave me!

My final dish was something one the light side and which looks deceptively simple.  Its principal components are raw Japanese tomatoes and fairly generic bite-sized chunks of Cheddar cheese -- but oh my re the green dressing/sauce drizzled over them. Is it possible that it was a mix of tangy pesto, reassuring spinach and rich avocado?  In any case, that's what I variously tasted it to be! ;b
Posted by YTSL at 11:31 PM

Heya, it's been a while.

But yes, I love Kanazawa. Went there on a solo trip early last year because I wanted to see the snow, and also mostly for the Kenroku-en. So beautiful.

(Well, I posted the photos on my blog, if you wanna check it out.)

BTW, whoa, Kenroku-en is still pretty amazing even without the snow and all.

Hi YTSL, oh my these looks so delicious. I took notes on their names. Thanks so much for sharing.

It has, indeed! Just looked up your profile and you're now at Waseda! How long is your course for? In any case, hope you're having a good, educational time at the Japanese university that had an exchange program with my alma mater (Beloit College, in Wisconsin) when I was a student there!

And yes, Kenroku-en is pretty even without the snow. I particularly like there one can't see highrises on the horizon when one is in it. :)

They were really delicious. Good look finding versions of them to eat! :)

Oops, that prompted me to update my profile. I've already finished early last year. I was there for quite a while, from 2008 until 2013, did both my Masters and Doctorate. They were cool, funded many of my films. Helped my career a lot.

These days I'm in Malaysia more, but do come back to Japan occasionally to either renew my resident card, or for some occasional film projects. (still giving a "visiting researcher" title by the kind folks at Waseda too)

Oooh, congrats re your Masters and Doctorate, etc. Very interesting that you decided to do your post-graduate studies in Japan. :)

While the Kushiage looks really delicious, I'm even more tempted by the concoction of tuna + scallops + natto + mountain yam. Natto with sashimi ... that's something I've got to try sometime.

The food looks so delicious and I like the combinations of foods in the second and third photos.

Natto and raw quail's egg on rice with seaweed is also pretty good! But ya, that dish in my second photo was so good I actually inadvertently made ecstatic noises while eating it! ;b

It really was so delicious -- and I do love how I've never been let down with regards to a meal thus far in Japan. :)