Ringing in the new year at Sake Bar Ginn :) 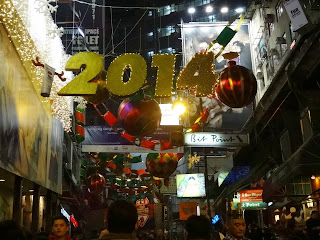 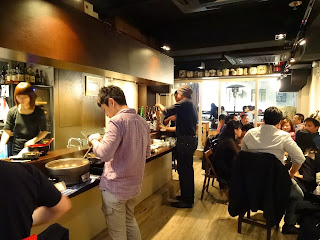 Delicious food as well as drinks on offer at my favorite bar
in Hong Kong, never mind just that area 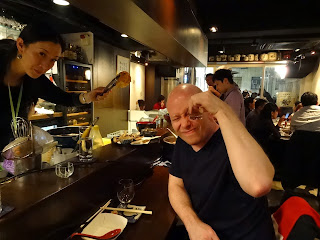 Good company also is to be had there :)

As I write this, it's still 2013 in some parts of the world.  Still, here's going ahead and wishing this blog's visitors -- especially its nice regular readers and commenters -- a happy new year now that it's 2014 where I am!

For my first post of 2014, I'm going to look back to last night where I did something I never thought I'd ever do: celebrate a new year in Lan Kwai Fong!  As I recently stated on this blog, I really don't consider myself a party person.  On the other hand, as I noted in that same blog entry (and previous others), I am pretty fond of sake.  And it's my love of my nihonshu -- especially the junmai varieties -- that's led me to become a regular at a particular bar in the area with the reputation of being Hong Kong's Party Central.


It all began a couple of birthdays ago when three friends took me to for my first visit to Sake Bar Ginn. On that occasion, I asked its proprietor, Ayuchi Momose, if it'd be okay for a person to go there alone and without booking in advance.  Momo-san assured me that it's fine, so a few weeks later, I decided to venture there and give the place a try on my own.

True to her word, on my first solo visit to Sake Bar Ginn, I was warmly welcomed and had a great time!  In retrospect, it really helped that I was seated at the counter overlooking the establishment's open kitchen, where I could see the amiable and talented chef Billy preparing the food, and also chat with him about the food and other subjects when he had time to do so.  Also, that seated in that area too that night was a friendly customer who I came to regularly see, chat with and befriend on a number of subsequent visits to the Lan Kwai Fong locale!


With more than 100 different sakes on offer at any one time, one easily can stick to just drinking sake at Sake Bar Ginn.  However, I've also brought people there who didn't have a single drop of alcohol during their visit, yet enjoyed it very much -- because the food on offer is really pretty tasty, and the ambience of the place is so wonderful.


Whereas much of Lan Kwai Fong is loud and crazy in a way that I don't care for, Sake Bar Ginn's volume levels tend towards the low side and its vibe is far more relaxed and laid-back than wild or boisterous.  Consequently, it can be this wonderful Zen oasis amidst it all, where people can chat without having to shout, and many interesting conversations on a variety of subjects (sake! different cuisines! movies! Mandela -- and no, I'm not kidding about that last one!!) can ensue.


So... back to last night: my particular reason for braving the Lan Kwai Fong New Year's Eve crowd was because Sake Bar Ginn was hosting a Sake + Toshikoshi Soba + Countdown Party!  Since 1873, the Japanese celebrate the new year following the Gregorian calendar rather than the lunar new year like, say, the Chinese.  But like with the Chinese, the Japanese commemorate and celebrate the new year by eating certain foods -- with toshikoshi (AKA new year) soba being among them!

Less quintessentially Japanese to my mind though was the bar staff's getting out some bottles of sparkling sake and pouring out glasses of it for everyone in the bar a few minutes before midnight.  And ditto re all of us heading out to the bar's balcony area to hear the countdown to the new year before clinking glasses and downing our portions of sparkling sake!  And all this while being showered with bits of sparkling paper raining from a bar on a higher floor of the building we were in!! :)
Posted by YTSL at 12:22 PM

Hmm... I remember a certain blogger once telling me that Lan Kwai Fong is "a truly must avoid place for me (her)".

Any plans to see the movie Lan Kwai Fong 3 in the new year? ; P

Happy New Year! Sake Bar Ginn looks like a great place to usher in the new year. Not too crowded & loud and a comfortable place to go with friends or by oneself.

Yeah, as I've told Momo-san (the Sake Bar Ginn owner) more than once, I only go to Lan Kwai Fong because her bar is there!!!

Happy new year to you too! Exactly re Sake Bar Ginn -- and I promise to bring you there when you next visit Hong Kong! :)

A pleasant photo-essay that starts the new year with a contact Sake high..Using your link to Sake Bar Ginn, I'm ready to place an order.

I'll have Wasabi Flavored Raw Octopus, the Raw Squid Marinated With Squid Intestine, and Edamame Beans (with seaweed, if available).

There you have it! I vicariously dined at Sake Bar Ginn. Thanks!