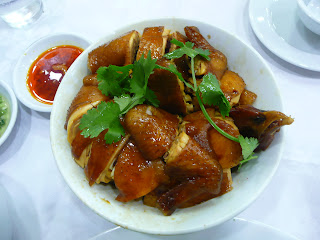 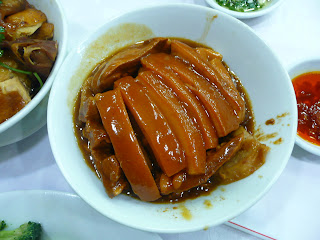 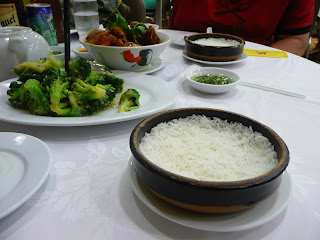 A plate of broccoli cooked with garlic and some amazing
claypot rice completed our dinner order for this evening :)

I think I just had the best chicken dish in the world at dinner this evening.  Granted that I was ravenous by the time I got to Tai Wing Wah Restaurant in Yuen Long, seeing that I didn't have breakfast or lunch (only brunch at 11.30am) today, and had completed an approximately 15 kilometer hike in Tai Lam Country Park -- but I truly found the five spice chicken at the dining establishment opened by celebrity chef Hugo Leung Man To to be absolutely delicious.

How delicious can be discerned by my actually eating more pieces of the five spice chicken than the also very tasty "village style pork belly" that I had also ordered; this even though I loooove pork belly and would prefer pork belly to chicken 99 times out of 100 (heck, maybe even 9999 times out of 10,000!).
The five spice chicken alone would have made this meal pretty special.  But there also was another dish at this walled village food specialist that tasted absolutely heavenly.  Costing just HK$11 (~US$1.42) per serving, the claypot rice at Tai Wing Wah may not look like much -- but I actually would be pretty happy to eat it just by itself, albeit after it's had some premium soy sauce and pork fat mixed into it, as was the case at dinner this evening!
Afterwards, my hiking friend and I were in agreement: today's hike had been pretty good but the post-hike dinner truly was superb!  About the only dish that was fairly ordinary to my mind was the vegetable dish we ordered to balance the two protein dishes we ordered and the decadent claypot rice.  In all honesty, that's not much of a complaint -- and my friend and I also are in agreement that the next time we are in Yuen Long after a hike, we absolutely do intend to dine at Tai Wing Wah again! :)
Posted by YTSL at 10:57 PM

Thanks for thinking so. BTW, hope you did check out my Photo Hunt entry for last Saturday too... :)