As regular visitors of this blog (particularly my hiking entries) know, I've got regular hiking buddies.  But I've also gone tramping with a few friendly ex-colleagues as well as people I got to know in other spheres.  Among these occasional hiking companions was an ex-colleague who told me that she hiked a lot with her father.  But it was only after we went on our first hike together (one along that involved a trip up to check out Amah Rock from up close) that she told me that their usual practice involved going up and down the same trail over and over again!

Ironically, because our first hike together (along Wilson Trail Stage 5 -- in reverse, from Tai Po Road to Sha Tin Pass) involved us taking a detour that got us away from our intended destination, I suggested that we go again along that trail on one of our subsequent hikes together -- only this time we would finally complete our originally planned route.  Even more ironically, when we finally got to Sha Tin Pass, the view there was not as great as I had hoped -- what with air pollution over Kowloon making the view less than optimally clear.

So it was a fortunate thing that there were enough interesting sights along the trail to make that particular day's hike not feel like a general loss... 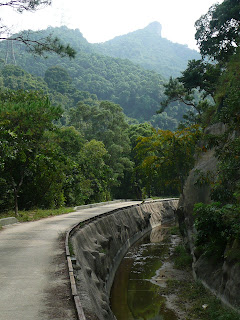 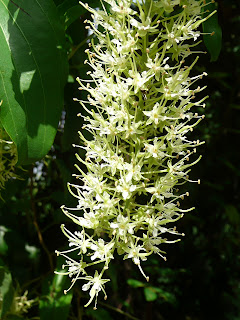 These days, I tend to fixate on spotting bugs and
other critters rather than admiring flowers -- but
some flora still are capable of attracting my attention :) 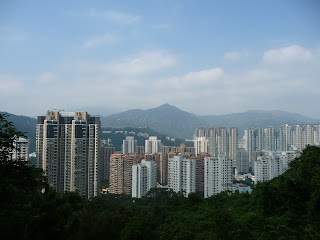 In some parts of Hong Kong, the green countryside and
skyscraper city really aren't that far away from each other 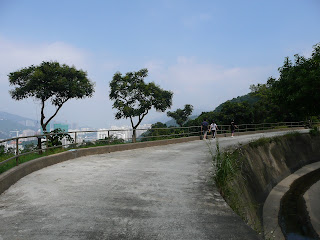 A scenic bend in the trail :) 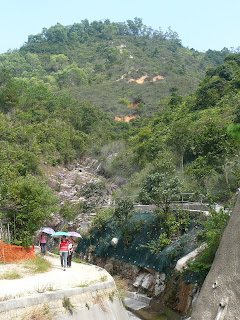 The last time around, we -- I kid you not -- detoured
up that hill along that orange-y "trail" (but this time,
we more wisely and safely continued along the catchwater) 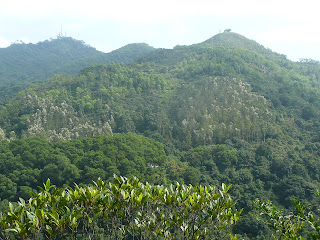 I like how there are many different shades
of green in this one picture :) 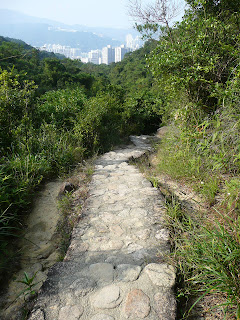 After reaching Sha Tin Pass (and pausing for
(non-alcholic) refreshments at a cafe there), we made
our way down a nicely paved trail to Sha Tin 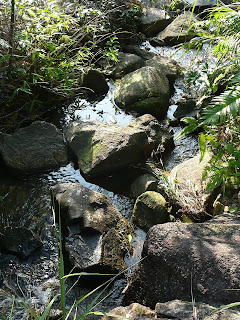 A pretty stream ran along much of the
downhill trail -- and its burbling added to
that day's overall hiking experience :)
Posted by YTSL at 10:23 PM

I love the Lion Rock photo and the city view of Hong Kong. Though they all are nice.

Sounds like you'd be the kind of person who'd like to hike to get nice scenic views. ;)

It sounds like the dai pai dong style cafe at the top of Shatin Pass is still there. Some years back when I lived in Shatin, I would often hike up there on a weekend and reward myself with some noodles and a couple of beers before the downhill trip back.

Yep, that cafe's still there alright. As a matter of fact, I was just up on Sha Tin Pass again two Sundays ago and had a glass of hot Horlicks there! ;b