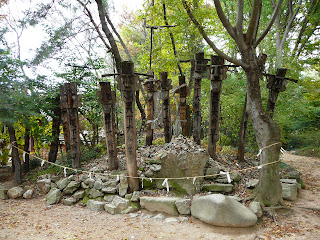 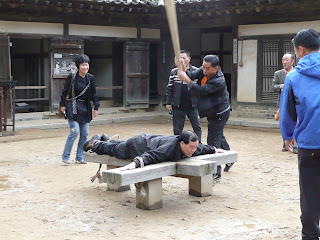 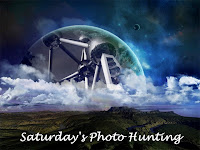 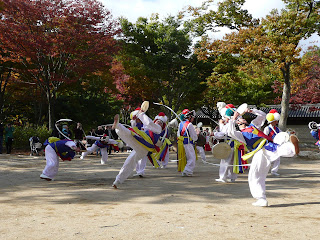 Imagine working in a place where sacred poles with grinning faces are described (at least in English, if not the native language) as scared poles.  Now picture that same place as being one where people pretend to be punished -- tortured even -- like in olden days for fun!  And if such a workplace weren't already zany enough, consider that some of its employees wear colorful costumes and twirl around with abandon for a living!!

It may seem "everyday" to those who work there because, well, they see things like this every day at their workplace. But the Korean Folk Village in Yongin City that my mother and I visited on our 2009 trip to South Korea definitely struck me as having its share of zany elements.

At the same time though, it's also true enough that this place that I've chosen to highlight in this week's entry for Sandi's and Gattina's Photo Hunts actually has a more serious side.  Established in 1973 and attracting approximately 1.8 million visitors each year, it's actually billed as an outdoor folk museum rather than mere amusement park.

Among the things my mother and I really appreciated on our visit to this cultural facility was how big was the space it occupied (660,000 square meters) and, also, that the majority of the more 260 buildings on view in the Korean Folk Village are actual village buildings that were relocated to it (rather than new replicas).  We also very much liked that a number of the buildings were "occupied" by people going about producing traditional handicrafts such as weaving and pottery.

Still, I think our most fun memories of the Korean Folk Village center around the folk performances of dances and equestrian feats, and also a colorful re-enactment of a traditional Korean wedding -- by seemingly the same team of performers.  So imagine dancing, doing such as shooting arrows while riding on a horse, standing up and bouncing about while the horse gallops around, and "getting married" at work daily... Now that's a pretty zany way to make a living by my book! ;O

That looks like somewhere I'd enjoy visiting. Great choice for combining the themes.

Looks like an interesting place to visit or work. Thanks for coming to see mine.

Hi YTSL, a great take for this week's dual themes. Your photos are wonderful and this looks like such a fun place to visit. I know that I would also enjoy the entertaining performances. Well, maybe except for the torture part. The twirling and dancing part, I can handle. :)

very cool. the first two images were quite iffy, i didn't know what was going. great photos though and thanks for the education.

Very interesting and informative as always, love the scare poles :)

My zany is up. Please stop by.
http://webs-of-significance.blogspot.hk/2012/07/zany-and-workplace-this-weeks-photo.html

I think you'd enjoy visiting the Korean Folk Village too. :)

It was/is indeed an interesting place to visit. Hope those who work there find their time there interesting too. :)

Thanks for your comments -- much appreciated. Re the "torture": that wasn't a performance by employees but, instead, it seems some of the visitors couldn't resist their hand at being punished and punisher! :D

Glad you read what I wrote in order to understand what was going on in the first two photos as well as the entry as a whole. :)

Thanks once again for visiting, looking and reading. Hope you have a good weekend too. :)

Sorry, I can't find your zany entry -- not least because you link you provided is actually to mine. ;)

that is pretty cool. i can't wait to visit SKorea in Nov.

Wow! That is zany!Great take on both themes :)

Hope you have a great time in South Korea in November. Think that's a very good time of the year to visit weatherwise. :)

Thanks, am glad the post is to your liking. :)

What a nice combination of both themes!

It sounds a fascinating place to visit :-)

Thanks, I'm happy that you think it's the case. :)

It was. My mother and I spent close to a whole day there. :)