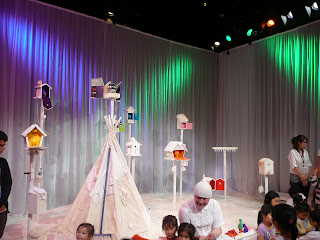 At the end of Catherine Wheels Theatre Company's
Hong Kong show, audience members were allowed to
take photos inside the black box theater that had been
transformed into a largely white space for the production 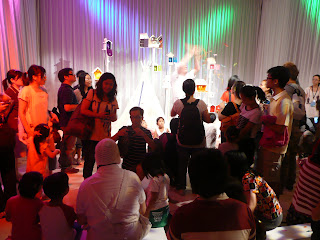 The cast members comfortably posed for pictures and
interacted with many members of the show's
predominantly young but very enthusiastic audience :)

As those of you who know me realize, I'm not someone who tends -- or loves -- to be surrounded by children.  But a few times each year since moving to Hong Kong, I happily acquiesce to being in an audience composed mainly of preteens; with many of these occasions coming by way of the annual International Arts Carnival that is Asia's largest family-oriented arts festival.

Last night, an adult friend and I went to -- and were splendidly entertained by -- the China National Acrobatic Troupe at Sha Tin Town Hall. (Highlights of the 2 1/2 hour show included incredible plate spinning, gravity-defying hoop tumbling and a man who performed all manner of jaw-droppingly astounding feats on a slack wire (as opposed to tight rope).)  And last Saturday, I went on my own all the way to Kwai Tsing Theatre to watch a 45 minute show that was officially geared for children aged 2 to 4 years.

A playful drama revolving around a stocky good-natured fellow called Cotton (portrayed by Ross Allan) and his older as well as thinner colleague Wrinkle (essayed by Sean Hay) charged with looking after eggs in a super clean, white world, White had its world premiere and won several awards at the Edinburgh Festival Fringe 2010. Mindful of a number of acts from Europe (and North America) having performed below expectations in Hong Kong, I tried to go into this Scottish production not expecting much. But upon walking into the black box theater and finding it to have been beautifully transformed into the kind of space where one could believe that dreams would come true, it was hard not to think that the show's audience would be in for a special treat that afternoon.

And sure enough, that did turn out to be the case as the Catherine Wheels Theatre Company proceeded to awe and inspire audience members young and old(er) (but still young at heart) with a presentation that showed how colors can add something extra to an actually already pretty happy world.  (N.B. It's not a major spoiler to tell of the arrival of lots of colors into a previously predominantly white world in White but I do reckon that how this state of affairs comes about is better left undescribed!)

All in all, I liked how the show enthralled throughout and made me smile, and ooh and aah with wonder several times in less than an hour.  Something else that I appreciated is how, like with Hayao Miyazaki's sublime My Neighbor Totoro, some dramatic tension and excitement managed to be creatively introduced into a beautifully imagined world that's actually without any bad guys (or gals -- for White is a two-hander with no female cast members!).

At the end of the show, audience members were free to take photos and go meet and interact with the show's pair of actors.  As evidenced by the two photos at the top of this blog entry, I happily took a few shots inside that black box theater.  I also am happy that before I took my leave, I also was able to go up to one of the cast members to say "Thank you" for having put on such a lovely show. :)
Posted by YTSL at 11:18 PM