Movies on my mind 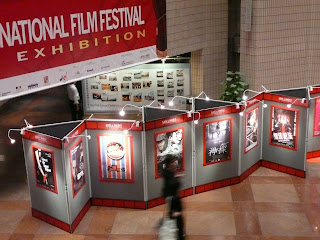 Soon it'll be film festing time in Movie Mecca again!
Even more so than usual, this past weekend felt like it passed by in a blur. One big reason why was that I spent a good part of it looking through the 33rd Hong Kong International Film Festival (HKIFF)'s bumper programme booklet trying to figure out not only what I wanted to see but also how I could possibly fit the screenings into my schedule.

In the end, I managed to figure out how to watch 23(!) movies over the course of the film fest and not die of exhaustion -- or take more than a day off from work. Then, early on Sunday, the first day that bookings were entertained (for other than the privileged holders of a particular credit card), I went ahead and made my bookings... and now can but hope that I managed to get tickets to all those screenings of the movies that I made bookings for.

(Sadly, those movies do not include such as the wondrous Peking Opera Blues, amazing Swordsman II, delightful Shanghai Blues and Green Snake --because they all have only been accorded single weekday early afternoon screenings! So much for the HKIFF's paying tribute to, and commemorating the 25th anniversary of, Film Workshop. And for myself, I just console myself with my having gotten to see all those cinematic gems at least once on a big screen already.)

Then, in the final hours of the weekend, I compiled my list of top ten movies viewed in 2008 for the annual Mobius poll. This is not the place or time to reveal all that much about that list which I hope will make an appearance -- along with many others -- on the Mobius Home Video Forum's Arthouse, World and Hollywood Cinema discussion board. However, I do feel obliged to state how sad a state Hong Kong cinema looks to be in when only three films on the list I made for Mobius also appeared on my top ten 2008 Hong Kong movies list.

Still, hope springs eternal -- and I really do have high hopes for the Hong Kong movies I hope to get to view at the HKIFF: movies like Derek Yee's The Shinjuku Incident, Ann Hui's Night and Fog and -- it finally is making an appearance in Hong Kong!!! -- Wong Kar Wai's Ashes of Time Redux!!!!!!

Yes, I am sure that I'm not the only one of your fans that is anxious to hear what you thought of Ashes of Time Redux (finally!). Without your review, and Brian's, I probably would never been able to appreciate the original film in the first place so many (8?) years ago.

I was pleasantly surprised that Ann Hui's new movie is ready so soon! After The Way We Are, I'm excited to see what she can do with Simon Yam. Hopefully, his performance will be different from his performance in Sparrow; unlike you, I liked the film a lot but somehow can't that acting style working well with Ann Hui's current directing style -- I'm getting visions of Chow Yun-Fat in Postmodern Life of My Aunt! Not good visions either!

I realize it's not the first time you told me but it really made my day to read that Brian's and my reviews of "Ashes of Time" made you interested in checking out and appreciating the film.

Moving on: yes, definitely hope that we get a more toned-down performance from Simon Yam in the new Ann Hui film. Re Chow Yun-fat's acting in "The Postmodern Life of My Aunt": actually had no problems with it -- rather, my problem was in the story's trajectory. Let's hope that "Night and Fog" will have a story arc that's more like "The Way We Are" than "Postmodern Life", "Eighteen Springs", etc., etc.

Peking Opera Blues on the big screen? Wow, that's a pretty charmed life you're living there in the Fragrant Harbour! Sounds like you've got a lot on your plate; hope you won't be too exhausted to give us your thoughts on the fest...!

Wow! I am looking forward to reading a bunch of your reviews as you begin to recover from your viewing spectacular--plus, I hope, some general comments on the occasion itself, reflections on what it all means for the future of HK film and even some people watching remarks.

I realize this sounds like a editor giving you a paying writing assignment so I should just say that I will be reading everything you publish and trying not to plagarize too much of it.

Hi! Thanks for leaving a comment on my blog! I've only just started, and I hope this will be a hobby for some time.

I agree about your comments on the Film Workshop retrospective. They certainly deserve a larger audience.

Actually, the three(!) times I've seen "Peking Opera Blues" on a big screen have all been in the US - once at the Smithsonian in DC and twice in New York courtesy of the Subway Cinema collective. ;)

And I do hope to have write ups of the HKIFF like I did last year. At the very least, you'll be able to check out what movies I've seen through my "most recently viewed movies" list on the sidebar.

You're welcome re my commenting on your blog and hope you'll add lots more content to it. :)

More re the Film Workshop retrospective: Like I said to a friend, it seems like the HKIFF organizers expect only foreigners to want to watch those movies... but, if nothing else, don't seem to realize -- or want to take into account -- the foreigners who live in Hong Kong and have to work during weekday office hours. :S

Hi YTSL, alas last minute work has caused me to apply brakes to my travel plans and cannot make it to this year's HKIFF :(

I am already seething with rage in having to miss the fabulous lineup :(
then again i must realize what's paying the bills... so hope that I can make it for the next edition!

Very poor choice of words on my part--not unusual. I would never take the words or images that another person worked to produce although I will quote and attribute things that I find particularly good.

What I often take from a blog, website or article is a new way of looking at something, generally a way that never would have occurred to me. While using a fresh approach isn't plagiarism as such I sometimes forget where the initial idea came from, particularly if I don't write about it for a few weeks or months.

While I may not be a First Amendment absolutist and an intellectual property fanatic, I am pretty close in both categories. I realize that the idea of the press being free government censorship isn't a concept that travels well outside of the USA and that the ownership of an idea, concept, string of words or particular image can sometimes be ambiguous, I always try to land on the side of the angels.

This is a long winded apology for a short and not well thought out post.

Oh no, this means your missing two HKIFFs in a row! Ah well, I guess you'll have the Singapore International Film Festival as compensation, right? ;)

Sorry if I got you overly concerned and apologetic. Also, have to say that I'm not that completely sure that the press is that completely free (of pressures and prejudice, etc.) in the US as well as elsewhere. At the same time, applaud your efforts to land on the side of the angels. :)

I'll be awaiting your thoughts on Redux! (And thanks for the link!) If I were attending I would no doubt be at the screening with you. Sadly, the HKIFF will have to go on without me this year. Maybe 2010 is my year. Enjoy it for me!

Alas, you're going to have to wait longer than we would both like as I just got my HKIFF tickets through the mail and guess what was the ONLY screening whose tickets sold out before my order was processed? :(((

SIFF has always lent its shoulder to cry on ;)

At least you have some consolation... and me too -- or at least, I *am* trying to console myself over lack of "Ashes of Time Redux" tickets by reminding myself that it WILL come out in Hong Kong theatres before too long. And I did get tickets to 24 (other) HKIFF screenings... ;S

Well, I look forward to hearing about (and being envious of) the 24 other screenings! Maybe the sell out for Redux will add some urgency to the Hong Kong release.

Fingers crossed re the second bit. And yes, I know, I should be grateful for the 24 other tickets... It's just that of all the movies showing, I'd been waiting the longest to see "Ashes of Time Redux", you know? :S

I like the sound of some of the films being featured at the festival. As always, need to be patient and wait for the films to arrive on DVD.

Thing is: many of the worthy movies shown at such as the HKIFF never do appear on DVD... including more than one film that I watched at last year's fest...