A by-the-numbers look at my 2007 movie viewing year 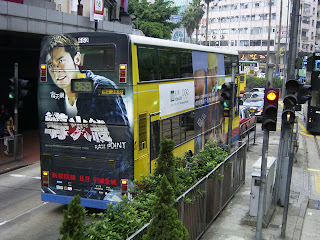 Movie advertising on the back of a bus, Hong Kong style!
1 -- The total number of 'new' (i.e., previously unseen by me) Brigitte Lin Ching-Hsia movies viewed in 2007 (and for the record, it was Little Sister-In-Law, newly available on VCD, with English and Chinese subtitles, in 2007). (And for those who haven't realized it, Brigitte Lin is my favorite actress of all time!)

2 -- The number of films viewed in a corporate boardroom setting this past year! (And should anyone wonder, the plus side is that the seats are really plush but the negative side is that the sound and visual quality may not be as great as one would like.)

2 too -- The number of feature films I've viewed on DVD while living in Hong Kong!! (So, yes, my viewing habits have changed enormously from being a mix of home video and public setting to almost entirely the latter.)

2 1/2 -- The total number of Malaysian films I viewed in 2007 (with Yasmin Ahmad's affecting Mukhsin and Tan Chui Mui's frustration-inducing Love Conquers All being the wholly Malaysian films and Tsai Min Liang's I Don't Want To Sleep Alone counting as just a half in my book.)

4 -- The number of films that will only officially be released in Hong Kong cinemas in 2008 that I viewed in 2007.

14 -- The number of non Hong Kong movies viewed in 2007 that I'd give at least an 8.5 out of 10 rating to; with these being (in viewed order, and with the territory (or territories) of origin in parentheses): The Sinking of Japan (Japan), Mukhsin (Malaysia), Bubble Fiction: Boom or Bust (Japan), King and the Clown (South Korea), Hula Girls (Japan), Zodiac (USA), Ratatouille (USA), The Loyal 47 Ronin, Part I (Japan), Hairspray (USA), Lust, Caution (Taiwan-Mainland China), Hero (Japan), The Last King of Scotland (Britain), Persepolis (France), and My Blueberry Nights (an English language Wong Kar Wai movie whose territory of origin I'm actually unsure of!).

15 -- The number of different territories whose films I viewed this past single calendar year. (And for the record, they were Britain, Canada, France, Germany, Hong Kong, Iran, Iraq, Mainland China, Malaysia, North Korea, Japan, Singapore, South Korea, Taiwan, and the USA).

15 as well -- The total number of movies I viewed over the course of a little bit more than a week at the 2007 Hong Kong International Film Festival.

16 once more -- The number of movies released in 2007 whose director and/or (at least) one of its stars I interviewed over the course of my work.

50+ -- The number of film personalities I've spotted at movie premieres as well as in everyday settings (e.g., at a fruit stand, in a cafe, in an MTR station!) since moving to Hong Kong. And yes, I really stopped counting around the 6 month mark of my Hong Kong stay! ;o

58 -- The number of Hong Kong (and Hong Kong-related: i.e., Mainland China-Hong Kong co-productions like Curse of the Golden Flower) movies viewed this past calendar year.

64 -- The number of movies from other than Hong Kong viewed this past year.

84 -- The number of films viewed on on a big screen (i.e., usually a cinema but also film festival settings like the Hong Kong Cultural Centre's Grand Theatre) this past year.

As an American, let me apologize for House of D and Guess Who, among others. Wong Jing movies don't look so bad compared to multi-million dollar failures like those flicks.

So why was I Don't Want to Sleep Alone only a half? You walked out or fell asleep? I liked the Wayward Cloud but probably couldn't sit through it again.

I am shocked at how few films you saw on DVD this year.

How did you track the films you watched? I viewed a ton this year and it would be such an arduous task (but worthwhile) now to try to put together a list (for purposes of, perhaps, a blog) cos I kept no track whatsoever. =( Did you keep a running list, like on MS Excel or something? haha.

I think I've seen these films in theaters: Shrek 3, Bourne Ultimatum, Lust, Caution, Mad Detective, Finishing the Game, and Komaneko the Curious Cat. Everything else was viewed at home.

Actually, "Guess Who", even while obviously not being as good as "Guess Who's Coming to Dinner?" wasn't as bad as I feared. "House of D", OTOH, was disappointingly maudlin and mediocre. Still, it definitely wasn't as excruciating as the one Wong Jing (produced) movie I saw in 2007: "Beauty and the Seven Beasts". So... no need to apologize for being an American on this account! ;b

On the subject of "I Don't Want To Sleep Alone": I neither walked out or fell asleep -- though I must admit to feeling tempted to do both. Instead, the reason why I considered it only "half" a Malaysian movie is that while filmed in Malaysia and having a Malaysian director, its star was Taiwanese and it was a weird Tsai Min Liang Malaysia where Mandarin was the dominant language.

As for the 4 2008 movies I saw in 2007: They're Johnnie To's "Linger" and a low budget work entitled "The Spark in the Dark" along with Feng Xiaogang's "Assembly" and Wong Kar Wai's "My Blueberry Nights". (And yeah, well, no prizes for guessing which movie I liked the best of that lot!)

And oh wow re how different our home video vs cinema viewing habits are! ;o

i could probably watch wayward cloud a couple more time but i don't think i can say the same of i don't want to sleep alone.

As for the movies of Tsai Min Liang: I think I've given them ample chances. No more!

I know that Tsai Min Liang has his fans -- and all the more power to him for that -- but, really, he's one of those filmmakers whose works get me thinking: "I want those hours spent viewing X film of his back!" ;(

woohoo... goodbye dragon inn is his masterpiece! u were referring to that eh?

by the way, seriously, how can i get hold of mizoguchi's ronin movies? is it available on dvds with english sub? yesasia didn't seem to have it. thx - hd.

Re Tsai: Let's just that "Goodbye Dragon Inn" is among those works of his which I've viewed!

As for Mizoguchi's Ronin movies: Sorry, can't help you with DVD info as I viewed them on a big screen at the Hong Kong Film Archive... ;b

I will start tracking my films! And books! My one resolution for 2008. And an easy one to boot. ;D

Sorry but I think they can't telecine without permission... And yes: big screen. Really! ;b

It IS easy enough to do if you do it one by one and immediately after watching/reading. Good luck with keeping your 2008 resolution! :)

Girl, you have got the LIFE!

I've got THE GIRL WHO LEAPT THROUGH TIME and THE SINKING OF JAPAN on my to-view pile of DVDs. I really want to see NANKING; it opened theatrically here and I clean forgot about it until reading your list. I just checked the movie listings and it's gone.

But the two most intriguing films on your list are titles I've never heard of before--LITTLE SISTER-IN-LAW and SISTER LONG LEGS. Tell us more!

Teeheehee re your opening remark!

As for the movies: NANKING is a film that won't lose much when viewed on video; so I recommend that you get yourself a DVD of the film when that comes out.

Re LITTLE SISTER-IN-LAW: Brooklyn Brian has a pretty good -- especially when you consider that he saw the film without unsubs some time back! -- review over here:-
http://brns.com/pages3/comed70.html

As for SISTER LONG LEGS: It's a classic Cathay family comedy-of-manners which stars Julie Yeh Feng (someone you've GOT to see, if you haven't already!), Jeannette Lin Cui (another Cathay star I adore) and Roy Chiao. BTW, didn't it play in New York as part of the Cathay series??

I only got to see one film at the Cathay series, WILD WILD ROSE. But I have seen Julie Yeh Feng before--in SUN, MOON, AND STAR Parts 1 & 2. Check out my reviews of same on IMDB.

Too bad re your going to see only one film at the Cathay series. Also, THE WILD, WILD ROSE isn't half bad but, for my money, the Cathay comedies generally are better than the dramas. As for SUN, MOON AND STAR: Glad you enjoyed it and yes, its female stars really are wonderful. :)