An enjoyable evening at a local Takayama izakaya 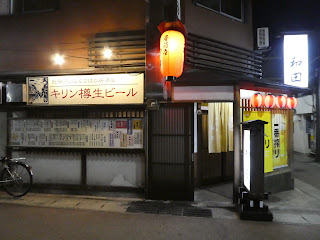 An izakaya that doesn't look super foreigner friendly from the outside 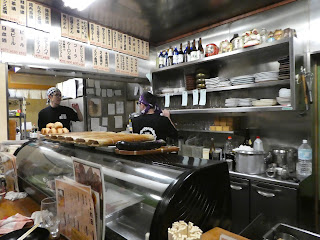 Despite it looking to the contrary, an English menu is available! :) 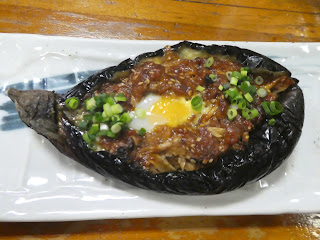 An eggplant dish offered there that may not have looked
the greatest but actually was super delicious! :b


Check out eateries and bars on side streets rather than main roads.  That's one of the pieces of advice I give to visitors to Hong Kong who tell me they want to eat in non-touristy places.  And that same 'rule' is one I often follow when visiting Japan with great results, like the wild game eatery I came across on my second night in Takayama and a nearby izakaya without any English on its outside that I decided to check out the following evening.


If truth be told, I would have hesitated to enter Wada if it hadn't been highly recommended in my copy of The Rough Guide to Japan since not only was there no English menu apparent on its exterior but also no pictures that I could use as a guide.  But upon finding my way to it and sniffing the great smells that were emanating from within it, I walked in without any hesitation and was happy to snag a counter seat from where I could see and smell a cook grilling all sorts of goodies as well as commanding the front space of the very local and noticeably non-chain izakaya.


Upon ordering a glass of nama biiru (draft beer) to start things off, I was intrigued to find a beer robot go to work on pouring my beer in a corner of the otherwise pretty old school-looking izakaya.  Similarly intrigued by me were the people seated on either side of me at the counter: on my right, a Filipina woman who, after I got into conversation with her, told me that she had lived in Japan for some two decades and was visiting Takayama from Nagano with her Japanese boyfriend; and on my left, a Takayama couple who told me they were truck drivers and were most eager to give me recommendations as to what to order at a place which they regularly frequented.

Although I was provided with an English menu upon my request, I decided to trust my new truck driver pals and let them order a couple of dishes for me.  The first one that arrived in front of me, grilled naso (eggplant) topped with miso, egg and spring onions, was incredibly yummy.  The second one was too but the order of grilled tonton (pork knuckle) was so substantial that I insisted that the fellow who had recommended it to me also had to help me finish it!


If the ice hadn't already been broken some time before, it truly was after that -- and we ended up trying each others' drinks and food and having an altogether pretty social time together, much like my experience at Matsuki Sushi on my first evening in town!  What with my having encountered friendly fellow diners on three consecutive nights in three quite different Takayama dining establishments and also the wonderful ticketing office staffer at Takayama Jinya who presented me with a lovely Funassyi note, I got to thinking that this mountain town may well be the friendliest place in all of Japan!

It's a measure of how much I enjoyed the company of my fellow diners at Wada as well as the food on offer that I managed to have a good time there despite it being one of those dining-drinking establishments where smoking (still) is allowed.  In fact, for much of my meal, I found myself sitting in between diners who were smoking away like chimneys: one of whom asked if I minded (upon which I had no heart to tell him that I actually did; and it also helped that he was vaping more than smoking smoking for the most part); another of whom didn't even think to ask if I -- or anyone else, for that matter -- had a problem with his lighting up for pretty much the entire time that he was in the izakaya! :O
Posted by YTSL at 11:49 PM

Is that half an eggplant or a whole one please? Grilling it with an egg without burning it? May I should have some experiment next time I go for BBQ.

It looked like a whole eggplant to me. Re the egg: I think they break it right onto the eggplant just before taking the eggplant is taken off the grill!

Ah, using the heat of the eggplant to cook the egg...... I have not thought of that. That is really worth experimenting next time.

Also FYI, if memory serves me right, the egg in question was a quail's egg... :)

Thanks for the update. I would try to use an oven to do it first. The eggplant in the photo didn't look big. Maybe it is one of the smaller ones? The brown edges looked like cooked eggplant with some sauce. Look simple but if cooking is concerned, it is usually the simple things that would stump the cook. Might take multiple attempts to get it right.

If memory serves me right, the eggplant I ate was actually a good size. Good luck trying out the recipe -- I believe the secret's in the sauce; more precisely, the incredible miso of the area!