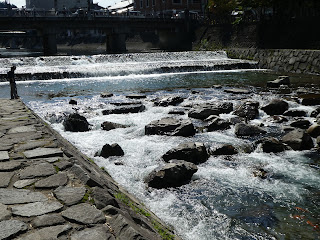 The Miyagawa flows through the center of Takayama 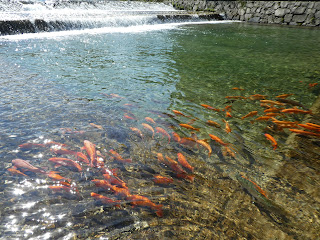 Swimming in its clear waters are lots of koi! 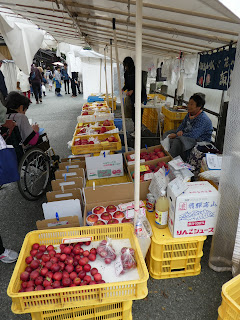 On one side of the river early in the day can be found
the Miyagawa Morning Market
Open daily from 7am for most of the year (and an hour earlier in the summer), the Miyagawa Morning Market was where I headed on my very first morning in Takayama.  The first stalls I saw hawked trinkets and tourist-friendly items (like Hello Kitty goods) but as I ventured deeper into the market, food stuffs became the dominant wares being offered up by the vendors at portable stalls on the side closer to the rvier as well as stores on the other side of the narrow path along which shoppers and gawkers alike walked.

Like at Kyoto's Nishiki Market, there were many different types of tsukemono (pickles) on offer.  There also was quite a number of stores selling miso paste, which is to be expected in view of the area being known for its miso as well as Hida beef.  And while there were stores that sold Hida beef and shika (deer) sausages and jerky, vegetables and fruits predominated rather than meat or -- unlike at Tsukiji -- seafood.

Some of the vegetables stood out in terms of their unusual appearance (this particularly certain of the mountain vegetables I'm not all that familiar with), others because of their unexpected appearance (like the strings of chili peppers that I don't tend to associate with Japanese cuisine).  Then there were the matsutake mushrooms that stood out because of their prices.  Among the cheaper ones I saw on sale were those going for around the 4700 Yen (~HK$327 or US$42) mark; with the highest priced mushroom I saw being individually priced at a whopping 13,000 Yen (~HK$904 or US$115)!

In this context, 4300 Yen (~HK$299 or US$38) can seem quite the bargain for a box of 13 or 14 big and beautiful Shinshu apples.  Even so, I did not bite -- though I did succumb and buy one 200 Yen apple to eat on the train journey back to Nagoya a few days later (and, for the record, that was one very juicy and sweet-tasting large apple that I had there)!

While walking in the market area, I noticed that there were steps leading down to where one could get very close to the Miyagawa and that there were things in the river that were attracting the attention of some people.  Curious to find out what this was, I made my way down to the riverside and saw lots of colorful koi swimming in the splendidly clear waters of the Miyagawa (as well as the occasional ducks paddling about).

With sunlight glistening on the water's surface and beautiful blue skies up above, it really was quite the scenic sight.  While not as spectacular as the sunset which greeted me the day before, all this did help contribute to my feeling that Takayama was a pretty magical place, one which I never quite lost in all the time that I was in this central Japanese mountain town. :)
Posted by YTSL at 11:55 PM