Golden Job reunites an ensemble that is no longer young but still can be dangerous! (Film review) 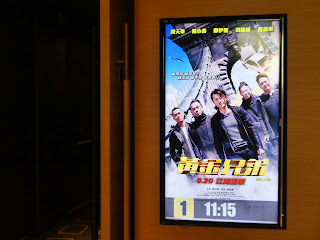 My screening choice for this week :)


A confession: I had very little idea of what Golden Job was about prior to my heading to the cinema earlier this week to view it.  I actually didn't even bother to find out who its director, scriptwriters, etc. were.  All I knew was that this was an offering which had the main stars of the Young and Dangerous series back together again -- and, frankly, that was enough for me because, if nothing else, I know that Ekin Cheng and Jordan Chan have great chemistry, and the latter is one of those actors I really would love to see more of but haven't had that many opportunities to do so in recent years.


I'll also be honest here and state that if I had known that Jackie Chan was one of the people behind this crime actioner, I'd have hesitated to check it out.  Ditto upon finding out that Erica Li Man is one the film's three co-scriptwriters (along with Kwok Kin Lok and Heiward Mak).  And there are harsher critics who would say that I'd then have been spared a couple of valuable hours that could have been used to better purpose, including by watching a better made movie with a plot that had fewer holes in it and proceedings that didn't require as much suspension of disbelief.


Here's the thing though: Even while my brain was telling me that Golden Job has its share of dumb movie moments, I still was entertained by this offering which has the Young and Dangerous gang playing globe-trotting mercenaries who seem as much at home in far flung parts of Mainland China, Bucharest, Montenegro, and Kumamoto and Fukuoka, Japan, as in Hong Kong.  In addition, I happily bought into the idea that the majority of these men could be more golden hearted than many a non-career criminal -- as can be seen by their main motivation for enacting their most ambitious and pretty risky heist stemming from their wanting to get valuable medical vaccines to a pure-hearted doctor (Charmaine Sheh) working at a refugee camp in Africa!


Frankly, when viewing this kind of offering, it probably is more important that the action scenes be visually impressive; and, as can be expected of a movie where Chin Kar Lok has had a hand in directing its action scenes, many of them -- particularly those involving car chases -- are indeed that.  Also counting very much in the film's favor is that, even though they play different characters in it from the triad ones that made them famous some two decades ago, Golden Job provides its featured acting ensemble -- supplemented by Eric Tsang in an elder statesman role -- with ample opportunities to show once again that they really do work very well together.

Further successfully pressing the nostalgia buttons was the re-utilization -- on more than one occasion -- of one of the Young and Dangerous theme songs.  Hearing it actually made me quite emotional, though not as much as a key dramatic scene that is a great example of how (heterosexual) Hong Kong men aren't afraid to cry and show how much love they have for one another (as well as how good at dramatically emoting Jordan Chan and Eric Tsang really can be)!


Something else that I found myself appreciating while watching Golden Job was how Ekin Cheng is one of those personalities who has aged pretty well -- maturing into a man with gravitas from the pretty boy that he was labelled as being back in the 1990s, and also maturing as an actor to have the requisite gravitas and charisma to seem like a natural leader of the band of heng tai (blood brothers) at the heart of this film.  (And no, I'm not just writing this because today happens to be his 51st birthday -- and I happened to walk by him on a Shau Kei Wan street earlier in the day! ;b)

Sounds like a fun action film that fans of Young and Dangerous will enjoy!

Did Ekin Cheng look young and dangerous in real life? ; )

And have you seen Jordan Chan's web series OCTB? He is good in it and I enjoyed that a lot.

"Golden Job" is one of those movies that I do think that fans of the "Young and Dangerous" stars would enjoy. I also think it may not be enjoyable unless you are a fan of the stars!

In real life, Ekin doesn't look young or dangerous -- but I will say that he's actually far more handsome in real life than on screen... and his hair now is shorter than in the movie -- which I think was what caused me to do a double take upon catching sight of him yesterday. Not only that but I gawped pretty obviously at him, whereupon he noticed, caught my eye and smiled... *swoon*! :)

And no, I haven't seen OCTB. Haven't watched any web series -- and before you ask, I also haven't watched much TV at all for some years now. :D