Standing up and rallying for Hong Kong on China's National Day 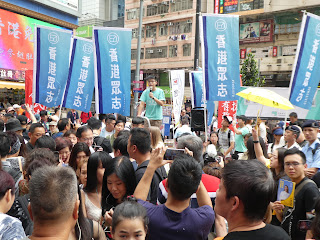 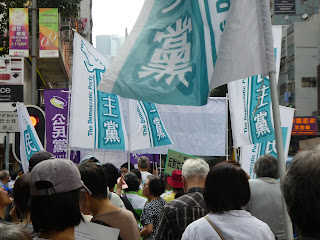 Certain Hong Kongers' way of "celebrating" the 69th anniversary
of the founding of the People's Republic of China ;b 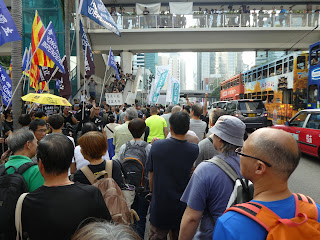 Between the radical and the apathetic -- and monitored
by the authorities? -- on China's National Day
This past weekend, I -- along with seven other willing volunteers -- took part in a beach clean-up on Cheung Chau.  Though our number was on the small side, I nonetheless was cheered by our spirit along with effort.  In addition, I took quite a bit of comfort in there being a number of Hong Kong residents being willingness to sweat and sacrifice for a greater cause -- and, in so doing, show up the idea that Hong Kongers don't care about the environment and about Hong Kong to be the fallacy or outright lie that it is.
I'm not sure how many of the people who took part in Saturday's beach clean-up also were out protesting on the streets of Hong Kong this afternoon.  But I, for one, do consider taking part in protest rallies against China's tightening of the screws in Hong Kong to be as much my civic duty as a Hong Konger as my going out and helping to clean Hong Kong's beaches.  Put another way: I consider both to be efforts to make Hong Kong a better, more liveable place.  Also, among the things that really impressed me about the Umbrella Movement was how many of its participants did seem to care for the environment.

Like with last Saturday's beach clean-up, today's protest march didn't attract that large a group of participants.  At the same time, it's also true enough that today's event did attract at least 100 -- and maybe even 200 -- times more than Saturday's.  In addition, I can say with utter certainty that the number of people who marched from Causeway Bay's East Point Road to the re-opened Civic Square in Admiralty -- not even including those who joined and/or left mid-way! -- far exceeded the number of (clearly paid) pro-Beijing counter-protesters who tried to hassle and heckle the march's participants at two points in Wan Chai as well as the activists waving Hong Kong Independence flags who assembled at one point along the way.
I realize that there are many people in Hong Kong who have decided -- after the occupation of key thoroughfares in Hong Kong for 79 days in 2014 yielded no immediate results -- that organized non-violence is not an effective way to lobby for democracy or political and human rights.  Some of them have decided that a greater radicalism is the answer, others that all resistance is futile, and still others that what they primarily want to do is sulk or flee.
While I understand why they feel the way they do, I reckon that dejection and passivity is not the answer (along with the kind of radicalism that the vast majority of Hong Kongers associate with criminality and look upon as headed to a dead end).  Rather, my way is to stand up, speak up and rally for Hong Kong (while I still legally can) -- and knowing that doing so in public and enmasse irks Beijing and its lackeys makes it feel all the more worth doing (and encouraging fellow Hong Kongers who love Hong Kong to turn out to do the same)!
Posted by YTSL at 10:25 PM