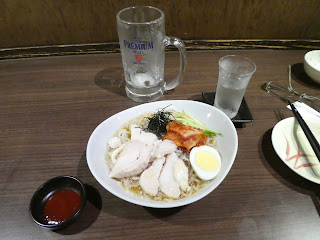 The first food dish I ordered on my most recent Japan visit! 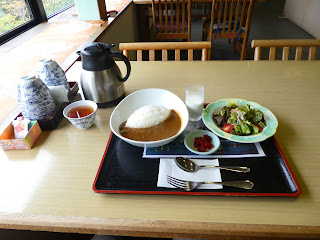 What I had for lunch the next day :b
Ask me what Japanese noodles I'd choose to eat and I usually am far more likely to opt for soba, udon, somen and tsukemen over regular ramen.  The power of film being what it is though, after viewing Ramen Heads on my flight from Hong Kong to Chubu Centrair International Airport, I found myself ordering a bowl of ramen for my first meal after landing in Japan once more a little more than a week ago now.

To be sure, the ramen I had the branch of a national chain of Japanese izakaya was pretty different from any of the varieties of this actually pretty diverse food item highlighted in the latest of a trio of ramen-focused movies I've viewed that began with Tampopo (1985) and also includes The God of Ramen (2013).  Served chilled rather than hot, and with slices of chicken rather than the more classic chashu, it also was very different in style and content from the first bowl of ramen I had in Japan: one of Funabashi's sauce ramen, whose existence I got to know about thanks to a certain Pear (Fairy) who hails from -- and is the unofficial mascot of -- that Chiba prefecture city!

With kimchi, a half of a boiled egg and thin slices of cucumber among its other toppings, this particular bowl of ramen that I had on my first evening in Nagoya got me thinking that it was the ramen version of Korean naengmyun.  In any case, it was pretty delicious as well as refreshing -- and I hope that I'll see it again on another menu in the future, particularly on a hot day when cold noodles dishes are eminently preferable to bowls of hot noodles!

As it turned out, my lunch the next day also was one that was movie inspired.  More specifically, after viewing Hirokazu Kore-eda's sublime Our Little Sister on a big screen for the third time a few months back, I've been hankering to eat some Japanese curry rice.  Unfortunately, the Japanese curry rice place that was supposed to be the best in Hong Kong closed down some time back and I have it on good authority that the Hong Kong branches of Coco Ichibanya are a pale shadow of the ones in Japan.  So it wasn't until I was back again in Japan that I felt I could get a helping of this dish which apparently was introduced to Japan by the British navy during the Meiji era!

It thus seemed rather appropriate when visiting Inuyama's Museum Meiji-Mura, on the second day of my recent Japan trip, to order a (Japanese) curry rice set lunch at one of the yoshoku-themed restaurant located in the Meiji era-themed open air museum.  And for the record: it was absolutely satisfying fare on what actually was a rather cool and drizzly afternoon; and, as it so happens, actually the first time ever that I've eaten any sort of curry dish on Japanese soil! ;b
Posted by YTSL at 6:00 PM