Feasting on Hida beef in Hida-Takayama 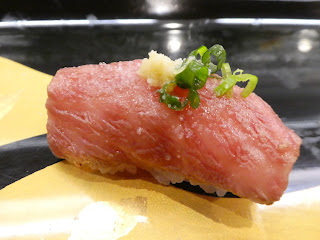 A slice of Hida beef sushi 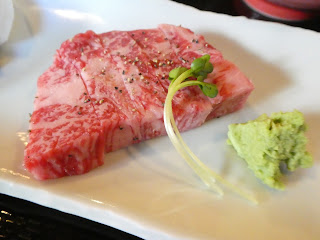 The portion of pre-cooked Hida-gyu that was part of
a lunch set I ordered while in Takayama :) 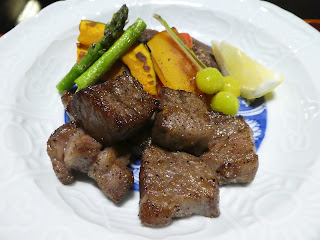 For my first meal in Takayama (aka Hida-Takayama), I opted to dine at a sushi-ya recommended in my Frommer's Japan guidebook.  For the most part while I was in the mountain town though, I stuck to eating land animals along with vegetables and other plants.  And even at Matsuki Sushi (where I was befriended by an amazingly nice family with roots in Takayama, though three of the four members I met now lived in Nagoya), I got to get my first taste of the famous Hida beef that was one major reason behind my wanting to visit Takayama!
Almost needless to say, that first, small taste of Hida beef -- in the form of a seared slice of sushi -- left me hungering me for more of one of the top types of wagyu (Japanese beef).  So, for lunch at Aji no Yohei, a restaurant affliated with the Funasaka Sake Brewery (that's one of a number of local sake breweries located in Takayama), I ordered a set meal whose main component was a beautiful-looking portion of beautifully marbled Hida-gyu lunch that I had to grill on a teppan by myself like with the Omi beef I ate in Hikone and the Yamatogyu I ate in Nara this past January.
So delicious was that Hida-gyu I ate that I found myself thinking that I might actually want to eat it every day that I was in Takayama!  And even while that didn't end up being the case, I did go and make a booking that very day to have a kaiseki dinner at a ryotei which would feature a Hida beef steak course on my last night in town!
On the day that I was going to dine at Ryotei Susaki, knowing that a kaiseki dinner would involve a whole lot of (good) food, I made sure to get a lot of exercise in earlier in the day by venturing along the 5.5-kilometer-long Higashiyama Walking Course.  Even so, when I saw the generous amount of Hida-gyu that I was serve that evening -- and this after having already eaten a number of courses featuring a whole host of other ingredients -- I found myself gasping in shock as well as awe!
I have to be honest: while I thoroughly enjoyed the first three or four chunks of Hida-gyu at dinner that evening, the ultra-fattiness of this super premium wagyu actually make that particular dish feel way too rich and hard to completely devour.  Indeed, so much of a struggle was it to finish up the dish that I actually started sweating and had to ask for ice water and also request that the temperature of the room that I had all to myself at the ryotei be lowered!
It took quite a bit of an effort but I did manage to eat every thick chunk of the Hida-gyu I was served that evening, even if I ended up having to cut the last few chunks into two to make the portion more palatable!  I just knew I had to because to not do so would feel like a crime because the beef actually was really delicious, just incredibly fatty and consequently rich tasting.
And believe me when I state that that Hida-gyu will live long in my memory.  Actually, because I still can taste that meat some two weeks on from that dinner, I haven't felt able to eat any beef in the time since: with one reason being that I still feel full at the memory of it and another being because I can well imagine that no beef is going to taste good for a time because I'll be mentally comparing it to the Hida-gyu I ate in Takayama!
So here's a hopefully not too facetious thought with regards to the suggestions that it would be good for the environment for us to eat less beef: if more fatty beef were served up than the leaner meat that is regularly eaten in the likes of the beef-loving USA, might it encourage people to eat less -- as well as higher quality -- beef?  And this idea doesn't even take into account that famously fatty wagyu -- especially the bona fide produced in Japan variety (for the record: wagyu means Japanese cow/beef in Japanese!) -- is quite a bit more pricey than the leaner meats that is the norm in much of the rest of the world! ;b
Posted by YTSL at 10:40 PM

Wow hold for a minute. I can't believe I just read someone wishing for a smaller portion of Hida Gyuu. :P

Serious though I think I understand what you mean. And come to think of it, perhaps this is why the locals sometimes match their beef with Hoba Miso to tone down that excess fattiness.

I think the portion of Hida-gyu in the middle photo's the best. Too much more and one is left feeling that there really is such a thing as there being too much of a good thing! ;b