Unique-to-Hong Kong hiking views from a hill above Kowloon 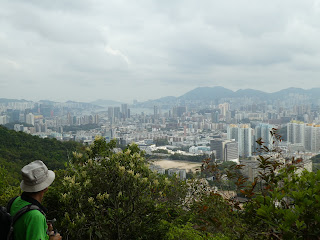 Urban vista on a hike in the Kowloon hills 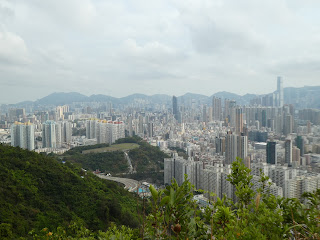 Buildings catch the eye more than greenery there! 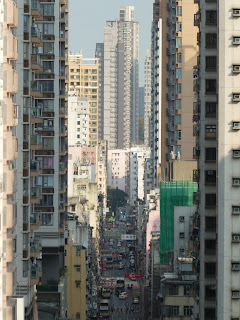 And on this hike, it's true enough that I saw more
artificial "canyons" than natural ones ;b
Since the 42nd Hong Kong International Film Festival officially concluded with the world premiere of Yoji Yamada's What a Wonderful Family! 3: My Wife, My Life last Thursday, I've been on more hikes than I've viewed movies.  To be precise: I've not viewed a single film in the past week while I've gone hiking twice over the same time period!
My most recent outing saw me make a rare foray into the Kowloon hills, an area of Hong Kong I don't often venture to because parts of it fall within the area of "Asia's World City" that's infested with monkeys.  My preference to spend time outdoors in other parts of the territory also stems from the chances of getting clear views from there, especially when looking down over the Kowloon Peninsula, seeming to be lower than elsewhere, thanks to a good amount of air pollution often emanating from as well as covering that super high density part of the Big Lychee.
But on the first ever hike I've been on that began in Cheung Sha Wan and took me up Eagle's Nest (Tsim Shan) -- specifically, sections of the Eagle's Nest Nature Trail located within Lion Rock Country Park -- and over to Kowloon Reservoir via Crow's Nest before looping back down to the part of Kowloon whose name translates into English as "Long Beach Bay", the group I was with found ourselves treated to fine vistas that stretched for miles and southwards all the way over to Hong Kong Island and even Tung Lung Chau!

I know Hong Kong residents who don't like seeing buildings, especially high rises, when out hiking.  And I do love that there are indeed parts of Hong Kong that I hike to and in where not a single building is visible as far as the eye can see.  At the same time though, I reckon that the veritable forest of highrises visible from certain high elevation viewpoints can make for an attractive and impressive sight in its own way -- and also one that taking in such views from within a green country park is one of those unique-to-Hong Kong experiences that should be appreciated rather than abhored! :)
Posted by YTSL at 10:44 PM

I'm curious: If you were to spot them while out hiking, would you be impressed by the sight of all those buildings or find them offputting?

I would like seeing all those buildings and I would take a zillion photos from all angles.....While encouraging everyone I was with to go ahead and plan a place to meet them later. And if that wasn't possible I'd arrange to return to that or a similar area with a guide.

There's an easier way to get to a few of the points where you get quite the view panorama than the one I went along earlier this week. Also, have you been up on the Peak on a clear day? I like the views from there too, even if they are far more familiar... ;)

The best place to hike in Hong Kong is Dragon’s Back, popular trail for all levels of hikers. Start from Shek O Road near to Tei Wan Village, then make your way up to Shek O Peak. Moderately difficult and the hike will take around 4 hours

Sorry, I have to disagree. Dragon's Back is nice on weekdays but way over-crowded on weekends -- and there are so many other less well-known trails in Hong Kong that I find far more satisfying to hike.