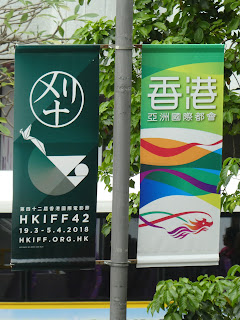 Chinese language banners for the Hong Kong International
Film Festival and touting Hong Kong as "Asia's World City"
In the Intense Now (Brazil, 2017)
- From the HKIFF's Reality Bites program
- João Moreira Salles, director and scriptwriter
- Featuring: Daniel Cohn-Bendit
The late 1960s saw political turmoil in France (which saw a period of civil unrest that included labor strikes and students regularly taking to the streets to protest), Czechoslovakia (where the Prague Spring was followed by the invasion of Czechoslovakia by Warsaw Pact troops led by the Soviet Union) and China (with the Cultural Revolution beginning and lasting all the way into the 1970s), among other territories.
Born in Rio de Janiero, Brazil, in 1962, João Moreira Salles and his family were living in Paris in May 1968 but has no memories of those events even while retaining childhood memories of the holidays he spent back in Brazil during the same period.  Instead, he draws on the memories of others and a mixture of archival footage and precious "found footage" shot by unnamed private individuals (sometimes surreptiously, at what can be imagined to have been at no small amount of risk to their personal safety) to look at and consider how things were and must have felt to witnesses to history along with those who had a hand in making history in Paris and Prague while making use of amateur film footage that his mother shot while travelling in China the same year.

While there are some who might consider In the Intense Now lyrical, poetic, even profound, I feel obliged to admit my feeling disappointed by this essay film not being as, well, intense as I was expecting a documentary with that word in the title -- as well as the type of subject matter it addresses -- to be.  Also, I feel rather perplexed, even disturbed, by the way that Maoist China ended up serving as a bucolic backdrop for his mother's personal journey rather than be accorded the kind of socio-political analysis that was granted to France and Czechoslovakia in the documentary.
It's not just that this made In the Intense Now's China sections seem less interesting than the others in the film.  Rather, it shows up a cultural ethnocentrism that privileges the West over the East whose exoticism appears to overly enchant but also render less human and meaningful.  In this context, it says a lot that while individuals like French student activist Daniel Cohn-Bendit are explicitly named and focused on, along with then French president Charles de Gaulle and philosopher Jean-Paul Sartre, not a single Chinese person is actually named and otherwise rendered individually distinct at any point in this offering.
Then there's the matter of his perspective on Brazil in the film.  Serving in the main, like China, to tell a more personal story seemingly intended as a counterweight to historical events taking place around the same time in Paris and Prague, there's no mention of Salles' home country being under military rule -- a rule that came after a 1964 coup d'état and which only came to an end in 1985 with the election of its first civilian president since 1960.  In short: Even while much of what ended up being covered in In The Intense Now was intriguing watching, I found myself thinking of what Salles omitted and feeling the film suffered as a result of what he chose to leave unmentioned even while going on and on about events in other lands.
My rating for the film: 6.0
The China Hustle (U.S.A., 2017)
- Also from the HKIFF's Reality Bites program
- Jed Rothstein, director and scriptwriter
- Featuring: Dan David, Matthew Wiechert, Carson Block, James Chanos, Soren Aandahl, Wesley Clark
Back in the 19th century, P.T. Barnum was moved to observe that "There's a sucker born every minute".  More than one hundred years on, we keep on being reminded of that, including by makers of documentaries such as Inside Job (2010), the Oscar winning work about the 2008 financial meltdown, and now also The China Hustle, which shows that various lessons have stayed unlearnt in the years since.
An economic suspense-thriller whose jaw-dropping last act effectively points to the show not being over yet by a long chalk, this documentary looks at American financial operators who conspire with businessmen in China to poach billions of (American) dollars from regular American investors who mistakenly place to much trust in their government and financial institutions, including big-name auditing firms and the U.S. Securities and Exchange Commission.  But while it does feature a number of "talking heads", its use of film footage shot over in various parts of Mainland China as well as Hong Kong and American locations as diverse as Flint, Michigan, and Wall Street gives an idea of its ambition as well as reach.
Early on in The China Hustle, its de facto protagonist, investor turned short trader Dan David, announces that "There are no good guys in this story, including me."  In a story like this though, he and his fellow "bulls turned bears", including Matthew Wiechert, and the likes of fellow whistleblower James Chanos and his colleagues, are the fellows you'll find yourself rooting for -- even while what they do can destroy the fortunes and reputations of others (including personalities like General Wesley Clark, who, at first glance, seems to be the personification of a straight arrow guy) and financially enrich themselves.
Unearthing scams so large and bare-faced that it's a shock not only to realize that they're going on but that they're not punishable as a result of their perpetrators having figuring out how to take advantage of certain legal loopholes, The China Hustle is the kind of film that had me leaving the cinema all abuzz and eager to discuss what I had seen with somebody else who had seen it too.  Fortunately, in my case, I have such a friend -- whose review of the work had whetted my appetite to check it out even while admirably allowing for me to make my own discoveries along the way!
My rating for the film: 8.5
Posted by YTSL at 3:52 PM