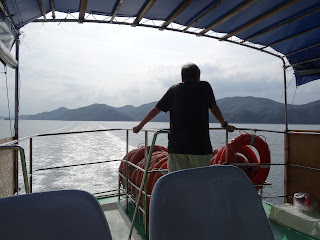 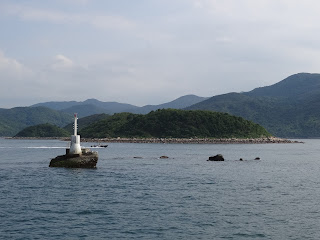 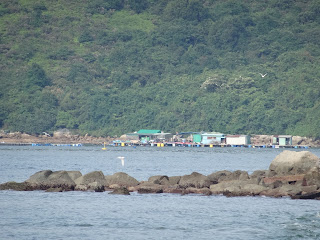 Rural Hong Kong can feel like a world away from urban Hong Kong :)
Just as many visitors to Hong Kong don't realize that there are more ferries in the Big Lychee than just the Star Ferry, many of those folks who live in Hong Kong but don't venture out much beyond the sections of the city covered in tourist maps aren't aware of the existence of kaito which usually serve the more remote parts of the territory.
This seems a great pity to me because, apart from being the only mode of transportation to some of the most scenic locales around (e.g., Hong Kong's southernmost island of Po Toi, and also the similarly named -- but actually pretty far apart from each other -- Tung Lung Chau and Tung Ping Chau), leisure rides of these small vessels, whose at least partially-open-to-the-elements top decks are great spaces for catching breezes as well as drinking in the passing scenery, can be such a pleasure on days of beautiful weather.
There have been occasions when I've been inclined to consider the short kaito ride from Chek Keng over to Wong Shek Pier to be the highlight of a day which also invariably included a hike through a scenic part of the Sai Kung Peninsula.  I also think highly of the kaito rides to be had between the Chi Ma Wan Peninsula (where I've gone for beach clean-ups as well also to do some hiking) and Mui Wo, and enjoy those between Aberdeen and Ap Lei Chau even though they last just a few minutes.
Each additional time that I've been on it though, I've come away thinking that the kaito ride from Sham Chung to Wong Shek Pier is my favorite of the kaito rides still on offer in Hong Kong.  Lengthier than my other favorites, especially when the tide is strong and going against this vessel whose motorized engines can seem to be not particularly super horsepowered, the best thing going for it is that it takes one through parts of Hong Kong that one otherwise would not be privy to if one doesn't own one's own private boat!
If one is so inclined, one can stop off -- or pick the boat up -- at Lai Chi Chong, Tap Mun, Ko Lau Wan or Chek Keng on the way from Sham Chung to Wong Shek Pier.  Actually, one could even board the kaito over at the pier at its starting point over at Ma Liu Shiu, close to the Chinese University of Hong Kong.  Thus far, I have yet to do so but maybe one day before too long, when all I want to do is take a scenic kaito ride just for the hell of it -- as opposed to hike and then ride back to "civilization" -- I will! ;b
Posted by YTSL at 10:24 PM