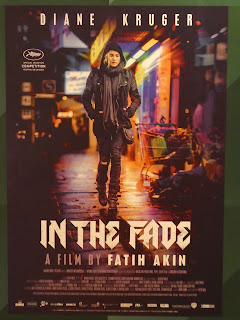 One of my favorite offerings of this year's
Hong Kong International Film Festival thus far
In the Fade (Germany, 2017)
- From the HKIFF's Cinephile Paradise program
- Fatih Akin, director and co-scriptwriter (with Hark Bohm)
- Starring: Diane Kruger, Denis Moschito, Samia Chancrin
Ever since I saw and was enchanted by his In July (2000) more than a decade and a half ago now, Fatih Akin has been one of those filmmakers whose cinematic efforts I try to make a point to see whenever I can.  A German of Turkish descent, his films have a distinct perspective that comes not only from having ethnic Turkish people in them but, also, showing parts and faces of a contemporary Germany that is unmistakeably multi-ethnic but still not always seamlessly so.
On the one hand, inter-cultural romances and marriages are very possible.  For example, In July has an ethnic German man falling for a Turkish woman while In the Fade has blonde haired, blue-eyed ethnic German Katja (Diane Kruger) marrying ethnic Turkish Nuri Sekerci (Numan Acar) and having a cute, curly haired son (Rafael Santana) with him.
On the other hand, major obstacles sometimes present themselves to these people living happily ever after.  More specifically, in In the Fade, while she's out enjoying some quality time with her pregnant sister Brigit (Samia Chancrin), her husband and son are killed by a pipe bomb planted in a heavily ethnic Turkish neighborhood by Neo-Nazis.
In a post-script, the fictional film's audience are told of a Neo-Nazi group having perpetrated a series of xenophobe murders between 2000 and 2007 throughout Germany.  Director Fatih Akin has shared in his interviews of his shocked reaction to these events and In the Fade's female protagonist -- rather than, say, her male ethnic Turkish friend and lawyer, Danilo (Denis Moschitto) -- being his alter ego.  With this knowledge in mind, the events depicted in this thought-provoking offering, and Katja's very strong and raw reactions to the loss of her loved ones, have truly powerful emotional resonance.

In recent years, the Hong Kong International Film Festival has added a few free screenings into its program.  One April 1st not so long ago, I attended a free screening of The Bride with White Hair in a theater packed to the brim with Leslie Cheung fans.  And at this edition of the HKIFF, I've taken in free screenings of Werner Herzog's hypnotic Into the Inferno and Nawapol Thamrongrattanarit's meditation on mortality and the last moments of a human's life.

A loose anthology of short stories inspired by newspaper reports the filmmaker collected of various deaths, some violent, others far less so, Die Tomorrow is one of those films that has a really interesting premise but disappointingly unsatisfactory execution.  In particular, I found the pacing overly languorous and, as is often the case with movies where the director also oversees the editing, reckon that the editing could -- and should -- have been tighter and less indulgent.  Furthermore, I feel that the film would have benefited from a more structured approach.

The way that Die Tomorrow's first story is relayed actually worked pretty well: with a newspaper headline about the death of a student being followed by scenes showing four young women hanging out on together and sharing their dreams and hopes for the future in the last hours leading up to their official graduation.  Small, mundane talk have a poignance that results from the audience knowing that one among that quartet will be dead so much sooner than they realized.

But as the film jumps from one story to another, involving many characters that there's insufficient time to really get to know and thus care for, its loses steam and impactional impact.  A measure of how wearying and boring viewing it becomes can be seen by my neighbor in the theater falling asleep about half way into the movie and even emitting gentle snores from time to time!  And while I didn't similarly succumb to the Sandman, I did find myself checking my watch from time to time, and happy that Die Tomorrow's total running time is only 71 minutes rather than 90 minutes or more!