A rare as well as seasonal sighting of a flowering Birdwood's Mucuna! :) 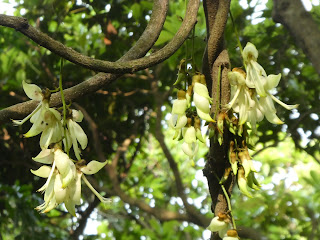 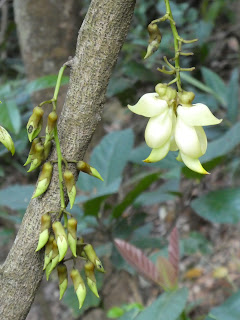 The kind of sight that makes admiring
nature lovers stop and stare :) 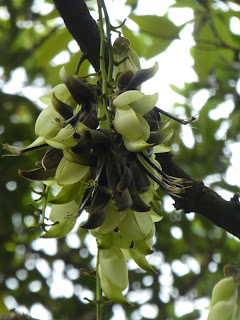 With the blossoms turning brown-black after just a few hours,
the white flowers really are a pretty rare sight!
As pretty much every Hong Konger as well as Japanese person appears to know, it's currently sakura season in the Land of the Rising Sun.  And around this time of the year, especially over the Easter holidays, it can feel like half, it not more, of Hong Kong is over in Japan taking photos of cherry blossoms (and sharing them on Facebook -- which I finally joined a little more than a year ago).
As yet, however, I've not seen a single photo shared on that social media platform of flowering Birdwood's Mucuna, a large vine native to Hong Kong whose flowering season takes place around the Ching Ming festival (which tends to fall close to Easter every year) -- and whose buds as well as blossoms can present quite the sight, should you be fortunate enough to be in a part of Hong Kong where the plant is in bloom.

Real life sightings of Birdwood's Mucuna flowers and buds have been almost equally as rare for me.  In fact, until I came across a veritable treasure trove of them along Mount Parker Road in Tai Tam Country Park a week before Ching Ming fell this year, I had only caught sight of them when hiking around Ho Pui Irrigation Reservoir with my mother way back in 2009!

On that earlier occasion, I must admit to having found them to be on the creeepy side since they are pretty distinctive looking and unlike few other flowers and buds I've ever seen.  Indeed, descriptions found in one of the two books I own on Hong Kong wild flowers make the Birdwood's Mucuna's blooms sound more like fauna than flora.  To wit: "Appearing in varied postures, the flowers have an extremely animated look.  The buds look uncannily like chicks waiting [to] feed, while [the] flowers look like brds fluttering in preparation for flight" -- and, if anything, I actually find the buds to resemble claws more than cute chicks!
Still, I count myself very fortunate to have come across an elderly man happily clicking away at the flowering plant lodged in the shadow of a clump of forest trees while out hiking one afternoon late last month.  Otherwise, like those people walking briskly past us along the popular trail, seemingly without any interest in what had caught our attention, and caused us to stop and fish out our cameras, I'd have missed out on the sight of this actually rather rare sight; not least because flowers only appear on Birdwood's Mucuna that are over 30 years old and its creamy white blossoms turn brown only a few hours after blooming!
Posted by YTSL at 8:25 PM

Interesting photo essay. In the last photo is the dark area flowers that have turned brown?

Yep, the dark bits nestled among the creamy white colored flowers are those that already turned brown. Quite the contrast, right?!