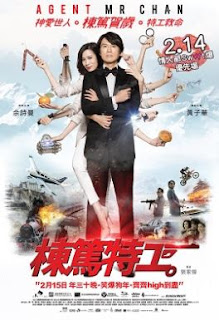 The kind of movie best seen
during Chinese New Year! ;b
Agent Mr Chan (Hong Kong-Mainland China, 2018)
- Jeff Cheung, director
- Starring: Dayo Wong (who also co-wrote the script with three others), Charmaine Sheh, C Kwan, etc.
If you had asked me two weeks ago which of the four Chinese language movies screening during the Chinese New Year period would do the least well at the box office, I'd have guessed that it'd be Agent Mr Chan since the film's budget and stars aren't as big as those of A Beautiful Moment (starring Carina Lau and Simon Yam), Monster Hunt 2 (starring Tony Leung Chiu Wai along with a bunch of CGI monsters) and Monkey King 3 (with Aaron Kwok as the titular character).  At the end of the first week of the holidays though, it's the spy spoof-comedy starring reputed "box office poison" Dayo Wong which has fared best at the box office, with total takings that rank second only to the global phenomenon that's Black Panther!
Pretty amazing, especially since word has it that Agent Mr Chan was one of those movies completed quite a while back, only to have its release shelved for a time.  At the same time, however, it's hard to imagine Agent Mr Chan having been conceived as anything but a Chinese New Year film since it's filled with the fun cameos (including by Sandra Ng, Miriam Yeung, Ronald Cheng, Alan Tam, Lam Suet and Hiu Siu Hung), possesses the kind of loose plot structure and has that super eager-to-please quality that one associates with this particular Hong Kong movie (sub-)genre!  Oh, and its makers did make sure to include festive greetings to the audience by the main star and other cast members!
In his first starring role since 2002 box office bomb, Fighting to Survive (which he also co-directed, -produced and -scripted), Dayo Wong plays Mr Chan, a top secret agent whose love of "world peace" gets him and his nerdy sidekick (C Kwan) kicked out of the unspecified spy agency which they previously worked for.  Reduced to becoming private investigators spying on their clients' cheating spouses, their life is made further uncomfortable through the efforts of a woman (Charmaine Sheh) duped into thinking that they were going to marry by Chan on what turned out to his final spy mission.
Over the course of just a few years, the woman in question rose from junior policewoman to Commissioner of Police and then on to Secretary of Security.  While still filled with anger at being left on the altar by Chan, he's the man whose assistance she calls upon to investigate how it came to be that the Financial Secretary (Lawrence Cheng), who happens to be a relative of hers, would decide one evening to dress up a ballerina and prance on stage in public!
As might be expected, Chan's investigation results in all manner of plot twists and turns.  It also paves the way for cameos galore, with Sammi Cheng's being particularly guffaw-inducing and so surreal that, for a while there, I actually thought a lookalike actress was playing her -- the way that there's a (sorta) lookalike Daniel Craig in this movie that references and spoofs the world of James Bond quite a bit!
Even in the wildest of imaginations, however, there's just no way that James Bond would end up going undercover as a nerdy super fan of a girl group.  However, with the guidance of his nerdy sidekick (who's disconcertingly super familiar with that particular pop cultural millieu), that's what Mr Chan proceeds to do when his investigations lead him to suspect that someone connected to the "Happy Girls" girl group is behind the dissemination of the drug that got the Financial Secretary, Sammi Cheng and Julian Cheung (also playing himself!) behaving in ways that appear pretty strange indeed!

If you're not too familiar with the world of Chinese New Year movies, Agent Mr Chan probably would be too bizarre a film for you to be able to take in and enjoy.  Even a veteran Chinese New Year movie watcher like myself felt her head spinning at times when viewing this seriously zany offering.  But while at other times of the year, I'd get frustrated at how all over the place this movie can be, during this festive period, I find myself being far more indulgent of such cinematic foibles and, subsequently, more able to be amused and entertained by it all!
My rating for this film: 7.0
Posted by YTSL at 11:59 PM

Thanks for the review, YTSL. Sure sounds fun!

Remember: be sure to approach it in the right (i.e., festive/generous) mood! In any case, please let me know what you think! :)

I've finally seen Agent Mr. Chan. While it's not perfect, it's very entertaining and I like how it doesn't take itself too seriously. Perfect for CNY, really. No wonder it was such a big box office hit!

By the way, what are your thoughts on L Storm, Golden Job and Project Gutenberg?

Yay re your finally seeing "Agent Mr. Chan"! I must admit to being tempted at times to get a DVD of it, if only to see whether I'll guffaw again upon seeing Sammi Cheng's antics in it!

Re the other films you've mentioned: I've yet to view any of them and must confess to having very little compulsion to check out "L Storm" since "Z Storm" and "S Storm" didn't do much for me. Hope to catch screenings of the two others before too long though!

Yeah, I asked about L Storm because people say it is the best in David Lam's Storm series. I found Z Storm incredibly boring and didn't bother with S Storm, but if I get a chance to see L Storm, I may actually see it!

I'm curious: Who are the poeple who say that "L Storm" is best of David Lam's Storm series?

Some friends told me. Also in reading on-line reviews, I get that impression too. Edmund Lee calls it "one perfectly mediocre action thriller which should nonetheless satisfy Hong Kong movie fans looking for a quick fix", which sounds OK to me.

Hmmm... Edmund's remarks don't sound all that positive to me! And, actually, here's something to note: "L Storm" looks to have disappeared from Hong Kong cinemas already. On the other hand, "Men on the Dragon" (which was released several weeks earlier) is still playing in local theaters!

Yeah, you're so right about Edmund's quoted comment! I guess there are so few quality HK films nowadays that I have learned to accept mediocrity without even realising it!

So 6/10 for Golden Job?! Looking forward to your review, but even more to your thoughts about Project Gutenberg!

Review of "Golden Job" written and posted -- on Ekin Cheng's 51st birthday! :b