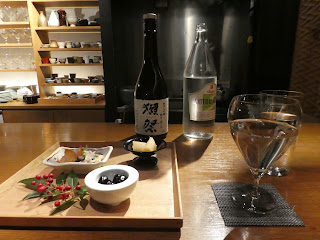 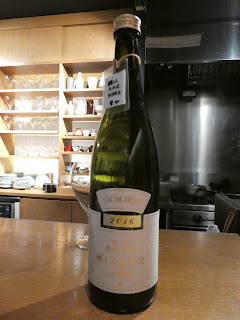 I knew I was in good hands when this sake
was offered up to me! :b 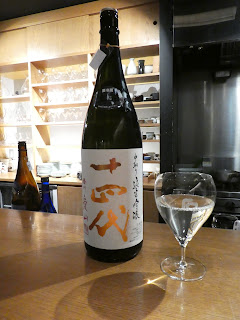 Probably my favorite sake of the night :)
More than five years ago now, I had a revelatory evening at a sake bar in Tokyo called Sasagin.  Until that night, I had never known that the drink the Japanese call nihonshu and the rest of the world refers to as sake (which, actually, is the Japanese word for (all) alcohol(s)!) could taste so good and pure, with certain varieties tasting like alcoholic mountain water to my mind!
Since then, I must have drank thousands of liters of sake as well as come to have a favorite sake bar in the city where I live, Hong Kong.  And before my most recent Japan trip, I decided to solicit recommendations from a sake industry insider for good places to drink sake in the city that I'd be spending the most evenings: Hiroshima; and consequently ended up spending a few very pleasurable hours at the Koishi Sake Bar located in the heart of the city's entertainment district.

The sister establishment of Ishimatsu Sandaime, an izakaya specializing in seafood from the Seto Inland Sea, the Koishi Sake Bar is located right next door but quite a different beast in terms of atmosphere and set up.  Very elegant looking and really quiet when I got there, I actually was the sole customer there for the first hour or so; something I took full advantage in terms of my having the undivided attention of its single, knowledgeable and friendly bartender who initially appeared to have been rather intimidated at the prospect of having to speak English but calmed down considerably and opened up after I told her that I'm no stranger to sake bars and usually start with a carafe of Dassai!
Since the Koishi Sake Bar had a selection of over 100 sakes, I opted to drink by the glass on the evening concerned but did, partly out of habit, and partly to see how it would taste in its native land, opt for a Dassai -- the 23 (as in made with rice whose grains have been polished down to 23 percent of the original), to be exact.  To go with it, I had the otoshi that came with the seating charge and, this time around, consisted of herring roe (yum!), ankimo/monkfish liver (more yum!) and kuromame/sweet black soybeans (actually also pretty yum!).

After I asked the bartender for recommendations and she brought out a bottle of the flagship sake of the brand known in Japanese as Kuheiji but also has Eau du Desir written on its bottles, I knew I was in safe hands -- as I had tried sake from this brewery on a visit to Sasagin and loved it!  And while the third sake I tried that evening was not as incredible, the fourth -- a Juyondai junmai daiginjo -- proved to be very tasty indeed and may well have been my favorite drink of the night!
To go with all that sake I drank that evening, I had a plate of assorted sashimi that was not super exciting but perfectly respectable, a delicious abalone dish that made use of its liver as well as meat, and a bowl of vegetable chips that really was the kind of bar snack that I wish all bars would have.  And while all that food may not have seemed to be on the substantial side, I honestly can attest to it appearing to have been sufficient to help me to avoid having a hangover the next morning.  Oh, and I do think it helped that a large bottle of mineral water -- which I did completely drain -- was part of the bar's otoshi!
And yes, I know that some people consider it rather sad to drink alone.  But I must say that I often enjoy being out in Japanese bars on my own.  In izakaya, I tend to end up fixating on -- and very much enjoying -- the food and drink.  And in sake bars, I really do get much pleasure from tasting some really excellent nihonshu and love that once they realize that you're a sake lover, the people behind the bar invariably get super into introducing (and talking about) good sake to you! ;b
Posted by YTSL at 11:51 PM