Not your usual critter spottings at Aberdeen Country Park! 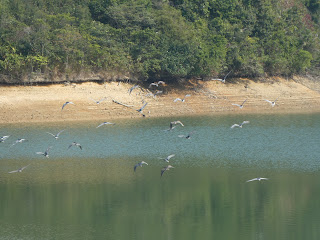 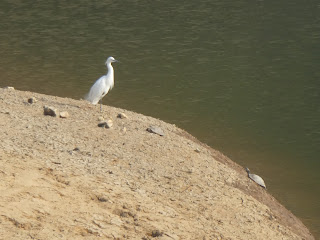 An egret and a tortoise at Aberdeen Lower Reservoir 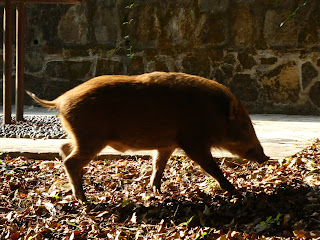 Wild boar at home at the edge of Aberdeen Country Park
A welcome lull in the recent cold spell here in Hong Kong (which saw frost kill crops in the New Territories!) had me heading to the hills for a hike this afternoon.  And so warm was the temperature today that I saw a lot more critters out and about today than I expected.
First up was a grasshopper that was so well camouflaged that my camera refused to focus on it.  I must admit to wondering for a time whether I had missed my chance to document my best critter spotting of the day.  But as the hike went on, I got to realizing that the small insect was by no means the only (non-human) critter that was out enjoying the +20 degrees Celsius weather!
Among other things: The variety as well as number of birds I spotted on Hong Kong Island today rivalled that which I observed on a visit to Hong Kong Wetland Park earlier in the week!  And for the record: today really was the first time ever that I spotted heron and egrets in Aberdeen Country Park!!
With regards to the former: what really amazed me was the quantity that were present in the area; something I was alerted to after a bunch of them that looked to have decided to roost at the edge of Aberdeen Upper Reservoir suddenly took flight as a result of a kite flying close to them.  With regards to the latter: they do seem to be much more solitary creatures; which made me all the more amazed and amused to spot one in the vicinity of another animal -- and a tortoise to boot rather than another bird!
A good measure of how surprising I found these critter spottings is that I actually wasn't as excited to come across as a couple of wild boar at the edge of Aberdeen Country Park late in the hike.  Although that normally would cause quite a stir, the fact of the matter is that I've seen wild boar in that area before.  Indeed, a country park official I got to talking to confirmed that the wild boar have made that section of the country park their home -- as well as assured me that they're quite safe to be around since they're actually become used to the presence of humans near them! :O
Posted by YTSL at 11:59 PM

The population of Herons and Egrets in Aberdeen is actually quite big. I remember seeing these birds in the reservoir area before.

Remember the South Island line construction started a few years back? Somewhere between the Ocean Park station and the Apleichau Bridge used to be a concentration of these birds on the trees along the route. The construction of the raised rail included the removal of some of the trees. That forced the migration of some of the birds. I suspect some of them moved to the reservoir area since then.

Did you see\hear any crows around when you were there? There should be at least half a dozen of them in the reservoir area.

Funny that I didn't see the herons and egrets in Aberdeen (Country Park) on my previous visits to the area! Are they seasonal or actually are there year round?

And yes, I saw as well as heard many crows yesterday. In particular, it was interesting to see that crows and herons had both been attracted to the vicinity of Aberdeen Upper Reservoir but were segregated in terms of different species of birds opting for banks on opposite sides of the reservoir!

The are actually lots of birds in the Aberdeen Reservoir area. If you go further up towards Magazine Gap just about an hour before sunset, you should be able to see black kites coming down to their branches for the day.

In the bushes and woods around the reservoirs you should also be able to see many local birds like various kinds of Bulbul, Magpies, Wagtails, Starlings. Not to mention other common birds like doves, sparrows, & Huamei (https://en.wikipedia.org/wiki/Chinese_hwamei)

If you are lucky, you may encounter the Blue Magpie (https://en.wikipedia.org/wiki/Taiwan_blue_magpie) with very long tail feather.

I am pretty sure there are owls around, but they are usually elusive and quite, very difficult to spot.

I did see plenty of birds in the Aberdeen Reservoir area on Saturday, including black kites and bulbul. I've seen the blue magpie elsewhere in Hong Kong but not in Aberdeen Country Park though. As for owls: I've only ever seen them in the wild in Malaysia's Taman Negara!