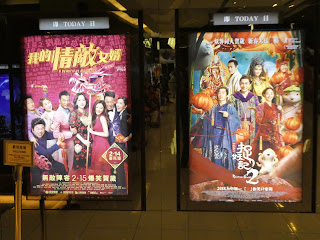 One of these Chinese New Year comedies I enjoyed viewing;
the other I plan to give a miss...


Patrick Kong is one of those Hong Kong filmmakers critics love to hate but whose films have had quite the loyal fanbase in his home territory, especially among females of a certain age and class.  Often given a modest budget to work with, his movies tend to perform respectably at the box office but could hardly be considered "must see" blockbusters -- until now.


Super star-studded and featuring a bona fide A-list headliner in Carina Lau Ka Ling, A Beautiful Moment not only has the filmmaker working once again with many regular collaborators (such as Alex Fong Lik Sun and Jim Chim) but also a plethora of actors and actresses who collectively represent several generations as well as eras of Hong Kong cinema, from veterans like Patrick Tse Yin, Nancy Sit and Helena Law Lan all the way to youngsters like Cecilia So (who made such an impact with her 2015 feature film debut, She Remembers, He Forgets).


Many of them have the kind of "blink and you'll miss him/her" screentime but those who notice their appearance will surely take some delight in their being part of this very local Chinese New Year movie that also sticks to this season's traditional conventions by being the kind of cinematic offering which focuses on family goings-on, delivering plenty of laughs and being sure to have a happy ending.  A Beautiful Moment additionally throws in the kind of mahjong- and poker-playing scenes that those who enjoy gambling movies will delight in, and ditto with regards to a pretty obvious allusion to the God of Gamblers.


Considering how many characters as well as jokes this sprawling movie manages to pack into its approximately 109 minute running time, I think Patrick Kong and co are to be applauded for keeping the main plot and sub-plots fairly coherent and the focus rather firmly on psychiatrist supreme Bo (Carina Lau), her martial arts expert daughter Michelle (Michelle Wai), and rich businessman Simon (Simon Yam) whose heart gets torn between his latest love and old flame.  Something else that's worthy of commendation is how much room Carina Lau and Simon Yam are given to show off their acting range; and, frankly, it's really wonderful to get a reminder of how these versatile talents can and do excel in comic and romantic roles.


In view of how very good the movie's two leads are, it might seem rather annoying that they have to share their screentime with so many others.  But Michelle Wai also proves to be pretty watchable and the likes of Ivana Wong (as Kiki, Bo's aspiring actress daughter) and Phillip Keung (as a major client of Bo who happens to be Simon's major business rival) manage to make what would otherwise be incidental as well as outrageously silly parts into ones which are pretty memorable as well as entertaining.


There are times when this film's cast is so good that it's tempting to think that they didn't need all that much directing.  At the same time though, I do also reckon that they were given some pretty primo dialogue to work with; with the ones likening men to Bluetooth devices and women to wifi being particularly amusing and also clever.  Regardless of who is (or are) primarily responsible for this effort, the main takeaway from all of this is that A Beautiful Moment delivered lots of smiles and laughs -- and, for that matter, many beautiful movie moments -- as far as I was concerned. :)

Nice review, YTSL. Patrick Kong's movies usually don't interest me a lot, but I now want to seek out 'A Beautiful Moment' after reading your review. Certainly sounds much better than 'Monster Hunt 2', which I saw on Chinese New Year Day (and was left disappointed)!

By the way, will you be writing a list of top HK films for 2017? (Would love to read it even though I know you were disappointed by many of the HK films that you saw last year!)

Thanks for reading and I hope you won't regret checking out "A Beautiful Moment". And no, I won't be writing a list of top Hong Kong films for 2017. I saw so few and liked even fewer of those films! I really hope things will be better in 2018 and am feeling encouraged by there being two local Chinese New Year movies along with the two Hong Kong-Mainland China co-productions this year.

Thanks, YTSL. Have you seen "Agent Mr Chan"; and if so, what are your thoughts on the film?

Not yet, probably some time next week -- and after I do, I plan to write a review which hopefully you (and others) will be interested to read! :)