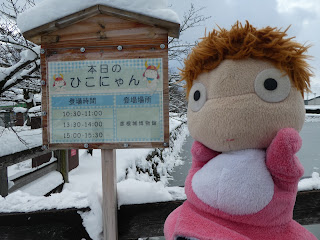 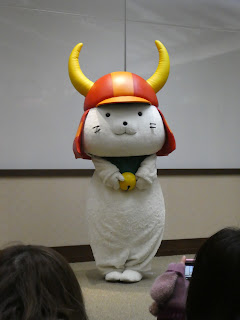 The official mascot of Hikone in the flesh! 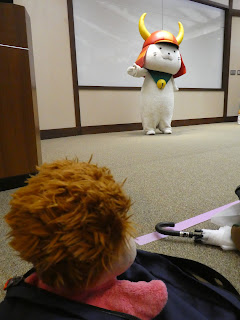 Puppet Ponyo watching Hikonyan's actions intently
(or, at least, with eyes that were wide open) ;b
For Japanese castle aficionados, Hikone is known for being home to one of just 12 original castles left in the Land of the Rising Sun left (rather than being a reconstruction like that found in Hiroshima or Osaka).  For many other Japanese, however, this city in Shiga prefecture is best known for having a samurai cat official mascot named Hikonyan.
Pretty much the first thing I did after arriving in Hikone was to head over to the local tourist information center.  While there, I was provided with a town map and pamphlets about the local pride and joy that is Hikone Castle.  And after I made known to the staff that I knew of their city's official mascot and was a big fan of the even more nationally well known and popular Funassyi, we proceeded to engage in a mock fan battle, with their doing such as pointing at the Hikonyan badges on their shirts and enthusiastically professing their love for their local mascot while I proceeded to wave my Funassyi handkerchief at them as I made my way out of the Hikonyan paraphenalia-filled space!
Having seen Funassyi live in Hong Kong, I figured it'd be fun to catch Hikonyan in action in its hometown and duly made my way over to the appointed venue the next day to catch the samurai cat mascot's first show of the day.  Scheduled to be half an hour long, it took place in a warmly heated room of the Hikone Castle Museum that was pretty full at the start, and mainly with adults (including several senior citizens) rather than children.

As it turned out though, many members of the audience decided to take their leave before the half hour show came to the end -- and I can understand why.  With apologies to committed fans of Hikonyan: The cat samurai mascot is cute to look at in pictures and such but I must say that watching him in action made me truly appreciate the Pear (Fairy) from Funabashi since Funassyi is so much more fun to watch and listen to.
Here's the thing: like many other yuru-chara (but unlike Funassyi), Hikonyan can't talk and moves pretty slowly.  Based on what I saw of his actions at the show, Hikone's official mascot's vision is extremely limited, and his head and helmet seem really heavy, and may also be easy to fall off. So he can't move his head from side to side, and also can't do such as crouch down, jump around or move at pace -- that is, move the way that Funassyi can and often does. And since Hikonyan can't talk, watching him can feel akin to watching mime; specifically slow speed mime.
All in all, the 30 minutes with Hikonyan dragged quite a bit and there's no way I would want to watch Hikonyan's show twice the way I was so happy to have done when Funassyi came over to Hong Kong back in 2016 and made appearances at both the Wired Cafe in Tsim Sha Tsui and Causeway Bay.  And I think my mascot affections can be clearly seen by my having come away from my time in Hikone with a Shiga prefecture-themed Funassyi regional souvenir rather than something with a keepsake with Hikonyan face on it! ;D
Posted by YTSL at 11:53 PM

You really have a penchant for Japanese mascots haven't you?

And yes, I do like kawaii Japanese characters... but Funassyi is my favorite mascot by far (with Shimane's Shimanekko -- what is it with the Japanese and cute cats?! -- also having positively caught my eye and heart)! :D

Hikonyan may not be as entertaining as Funassyi, but this Hikone mascot radiates a certain feline charm that is more than just Japanese. I thought of applying it as a possible Scandinavian mascot or even as a mascot at a Minnesota Viking's football game.

The bottom photo of The Endearing One is a classic Ponyo point-of-view shot that makes her look like an observing child. Precious beyond belief! Comparable to your past photo of Ponyo observing the action below on the street in Amsterdam's Red Light District.

I think Hikonyan is photogenic and would make a good mascot at a Minnesota Vikings game! However, as you know, my heart belongs much more to Funassyi and Ponyo (and Hello Kitty too)! :)